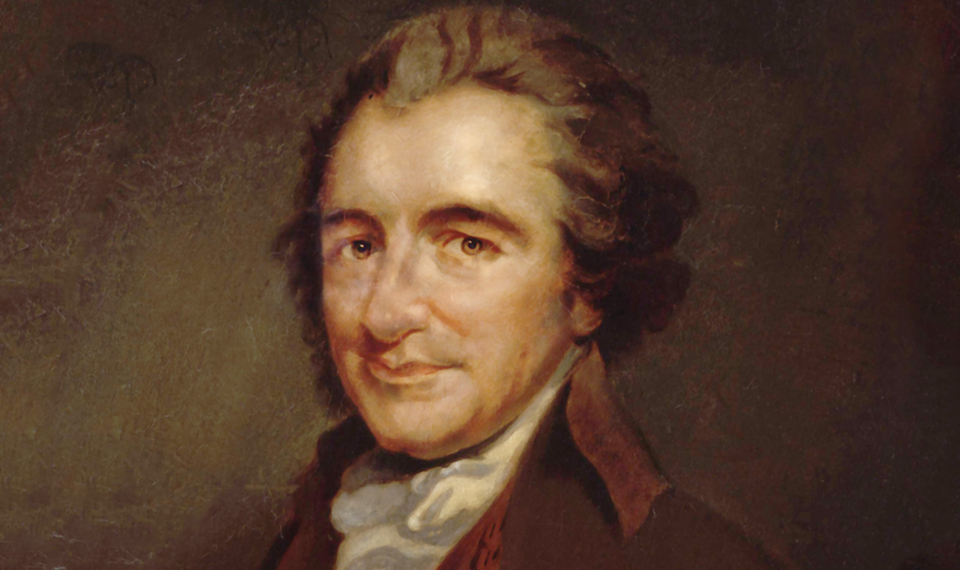 In Thomas Paine, the radical Enlightenment belief that all social and political ills were remediable found its most passionate champion.

Many people today think of the 18th-century Enlightenment as an exciting season of reason, a black-swan moment when new energies flowed, when the early modern world began to be turned upside down, thanks to the fearless critics of power, pride and prejudice, who suddenly thought differently, imagined a bold new future and called on their fellow citizens to press hard to make it a reality.

The interpretation is unfortunately too simple. Truth is that the intellectual upheaval that came belatedly to be called the Enlightenment (the phrase was largely a 19th-century neologism, typically circulated by its enemies) was in fact a much messier affair. Historians, philosophers and political thinkers have taught us to see this 18th-century upheaval in less Whiggish, less sanguine ways. Grandiloquent treatments of ‘the Enlightenment’ – Anthony Pagden’s The Enlightenment and Why It Still Matters (2013) springs to mind, as does AC Grayling’s recent gushing defences of Bacon, Hobbes and Locke and other early luminaries in The Age of Genius (2016) – are quite out of fashion, and for solid reasons.

Most analysts of the so-called Enlightenment today prefer to view it as multiple enlightenments, as various intellectual and literary tendencies centred on many different themes, with positive and negative effects. Let’s take some examples. Theodor Adorno, Max Horkheimer and Michel Foucault long ago challenged us to see that the 18th-century fetish of ‘reason’, its will to know everything and to measure and master the world, fed the spirit of bureaucratic ‘unreason’, incarceration and totalitarian rule. Isaiah Berlin reminded us that the opponents of Enlightenment, dubbed the ‘Counter-Enlightenment’, included thinkers, poets, painters and writers who plausibly championed pluralism, doubted talk of ‘nature’ and attacked the blind belief in scientific progress, in effect because they viewed the world as shaped not by the laws of nature, but by the contingencies of history. Then there’s the erudite set of influential books by Jonathan Israel, who has shown that what until now has been called the Enlightenment in fact contained multiple and conflicting strands. According to him, the true champions of ‘enlightenment’, those who favoured the extension of civil rights, social justice and democratic representation, were actually just a minority, an important but beleaguered fraction of a much larger and more self-contradictory movement that had no essential unity of principle or purpose.

Israel’s point is well-taken, and should be further developed to grasp a striking breakthrough in the work of the Enlightenment radicals: their sharp awareness of the misfortune, deprivation and unhappiness suffered by people ground down by institutions not of their own choosing. The rebels despised misery. They decried the pessimism of the miserabilists in their midst. Misery was their intellectual and political target. They took aim, initially by rescuing the old French word miserie (it was originally drawn from Latin miseria, from miser, ‘wretched’, and miserari, to pity) so as to build for their contemporaries a new language in which to understand misery differently. Thanks to them, we could say, misery was finally given its proper name. Starvation, indignity and unhappiness were denounced as unnecessary blights on the face of the world. Misery was no longer regarded as God-given, or as part of the natural order of things. It was seen to be contingent, remediable, for instance through generous changes of heart and mind, backed by tough social, legal and political reforms, even by means of a revolution, if necessary.

Thomas Paine (1737-1809) was arguably among the greatest champions of this fresh way of thinking about misery. Author of the three biggest-selling books of the 18th and early 19th centuries, Common Sense (1776), Rights of Man (1791) and The Age of Reason (1794), Paine still ranks as the greatest English champion of clean, open, humble government. He should be remembered for his lifelong devotion to the cause of liberty for all; his unshrinking opposition to lying; his deep-seated dislike of monarchy and priestly tyranny; and his daring public attacks on the hypocrisy and hubris of the American and French revolutionaries. Most compelling of all was Paine’s burning desire to meet the arguments of his foes, not with gunpowder or the sword, or haughty bitterness, but with words from Isaiah: ‘Let us reason the matter together.’

For his reasoned daring, Paine was forced to suffer more than his own share of personal misery: enforced exile from his native England; a spell in a Paris prison and a brush with the guillotine; and pugnacious media abuse from his foes. His enemies were a strange crew. There were wigged and powdered supporters of the lunatic King George III, the Jacobin terroristes and boorish Christian sectarians in America. All of them tried hard to damn and disappear him, for instance by labelling him a ‘filthy little atheist’ (Teddy Roosevelt), or by speaking against his rotten grammar and alleged confabulation (George Chalmers, his petulant first biographer, howled that he had falsely added an ‘e’ to his surname).

The aim in every case was to push Paine into a rat’s alley, where not even his bones survived. His bones indeed went missing. But even though Paine found no final resting place, thanks to his friends and supporters memories of his political confrontations survived, beginning with the first literary glimpse we have of him, a daunting epitaph for a pet crow, which he buried in the garden of his home in Thetford:

‘Here lies the body of John Crow,
Who once was high but now is low;
Ye brother Crows take warning all,
For as you rise, so must you fall.’

As you rise, so must you fall: with these words, written when he was just eight years old, the boy from Norfolk signalled his life-long contempt for pomposity and hubris. In an age of corrupting government fed by sinecures, Paine was brave enough to call George III ‘king or madjesty’, even to conclude a letter to the home secretary: ‘I am, Mr Dundas, Not your humble and obedient servant.’ In snorting style, Paine satirised the corrupting effects of publicly unaccountable power. He did everything he could to prevent the abuse of citizens’ rights by the rich and powerful. He hurled his quill at the pity of war, unrestrained markets and greedy banks. Paine denounced all forms of organised religion as ‘nothing other than human inventions set up to terrify and enslave mankind, and monopolise power and profit’. He appealed for hospitality, and called upon citizens everywhere to display a big-hearted openness to the world, as in the famous exchange with his friend Benjamin Franklin. ‘Where liberty is, there is my country’, Franklin reportedly said. ‘Where liberty is not, there is my country’, Paine quipped in reply.

Paine was saying that citizenship of any country implies a duty of citizens everywhere to take an interest in the misfortunes of others. Paine was against misery everywhere, in every form. His 18th-century enlightened vision of a decent life for all remains relevant. His principled rejection of political despotism and social injustice more far-reaching (say) than that of Karl Marx. Paine’s practical proposals managed to combine breathtaking vision, a humble respect for ordinary folk, and a sober recognition of the complexity of human affairs. Paine was for strong, effective government, but also for a government limited in scope and strictly accountable to its citizens. He supported unbridled freedom of public assembly and expression, though not its licentious abuse. He favoured private property and market competition, but fought for the principle of a guaranteed citizens’ basic income and other tax-funded public measures to prevent society’s cruel division into rich and poor.

Agrarian Justice (first published in French in 1795) amplifies these themes; it is among his most powerful trumpet blasts against misery. Written in reply to a sermon by the good Bishop of Llandaff praising the division between rich and poor as a sign of God’s wisdom, Paine’s remarkable tract targeted the class of nouveaux riches then emerging as the ruling element in post-Jacobin France. Note the parallels with today. In contrast to the Jacobin dictatorship, which had preached austerity, the new Thermidoreans, said Paine, had discovered private freedoms, mixed with market pleasures. Civil society was reborn, but the return to laissez-faire split it into rich and poor. The widening inequality Paine considered shameful, and he likened the division between poor and rich to ‘dead and living bodies chained together’. But against the apologists of poverty, he insisted that the problem was remediable. Poverty is not God’s will, he argued. It is an artificial, humanly produced blight. ‘It is wrong to say that God made Rich and Poor’, wrote Paine, ‘he made only Male and Female; and he gave them the earth for their inheritance’. This principle that the earth is ‘the common property of the human race’ implied that the propertied rich had an obligation to help the poor, not by charity alone, but by accepting a government-administered inheritance tax system designed to redistribute and equalise income.

In calling on others to make poverty history, Paine did not say what would be done with recalcitrant property owners and their families who refused to acknowledge the common property right, let alone pay their share of death duties; the problem of strikes by the wealthy against redistributive policies had to be faced by later social reformers. Paine instead sketched a plan for setting up a national fund out of which every man and woman reaching 21 years of age would be eligible for a compensatory one-off payment of £15, while every person reaching 50 years of age would receive an annual citizen’s pension of £10. He emphasised that the payments would be based on a decisive and durable ethical principle: ‘When it shall be said in any country in the world, “my poor are happy; neither ignorance nor distress is to be found among them; my jails are empty of prisoners, my streets of beggars; the aged are not in want, the taxes are not oppressive; the rational world is my friend, because I am a friend of its happiness.” When these things can be said, then may that country boast of its constitution and its government.’

Which country on our planet today meets that test?

John Keane is professor of politics at the University of Sydney and the WZB (Berlin). He’s the author of Tom Paine: A Political Life (1995; 2010) and the first full-scale history of democracy, The Life and Death of Democracy (2009).

Cover picture: The Friends of the People, Isaac Cruikshank, 1792. 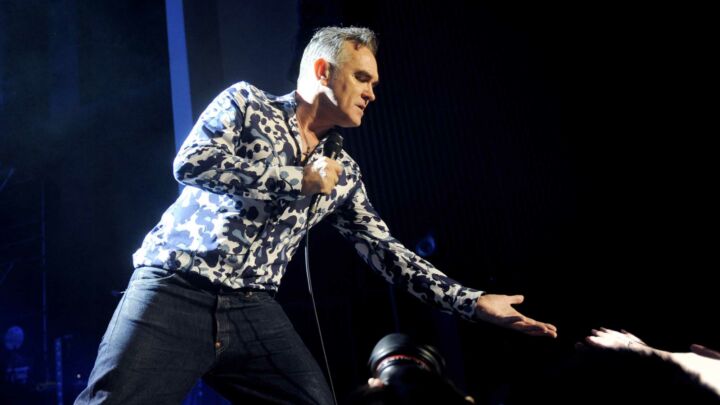 The fire in Morrissey now