The West’s death sentence on Syria

Assad and Russia are cleaning up a mess made by Western meddlers. 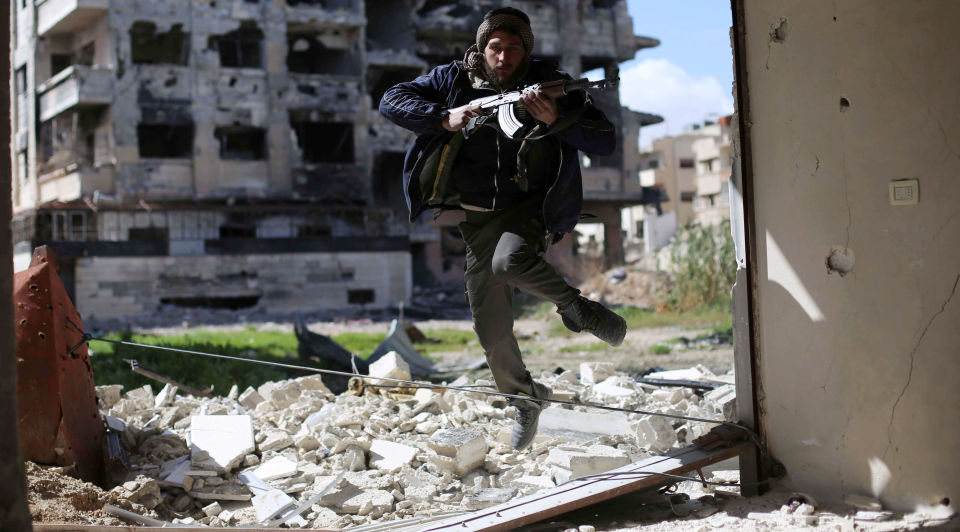 ‘I cannot conceal my elation as the news comes in from Palmyra and it is reported that the Syrian army is genuinely back in control.’ So said London mayor, and Conservative leader-in-his-dreams, Boris Johnson, when it emerged that President Bashar al-Assad’s government forces had retaken the Ancient Syrian town of Palmyra from ISIS. No doubt he’ll be uncorking another bottle now that Assad’s army has retaken the key strategic town of Qaryatain. In Syria at least, ISIS really does seem to be in retreat.

Few Western politicians or pundits have greeted Assad’s recent Russia-backed victories over ISIS with as much blustering What Ho! enthusiasm as Johnson. But, make no mistake, many share the underlying sentiment. That is, they are relieved that Assad, aided and abetted by Russia, appears to be rolling ISIS back; that he appears to be reasserting some semblance of control; that, as Johnson puts it, ‘sanity’ seems to be returning to the region. Few are saying it outright. But the sentiment’s there all right, nestling in the ‘but’ of the Western media reports – the point at which the obligatory condemnation of Assad’s ‘bloodstained’ regime gives way to the relief that his forces ‘appear to have driven the ISIS fanatics out’, or that ‘the population under the control of ISIS may now be able to begin to think of a future without it in a way it has until now been unable to do’.

It appears that Assad is once more becoming the acceptable face of Middle Eastern autocracy. And in a sense, of course, these realpolitiker-come-latelys are right. The rule of Assad, as restrictive and as ruthlessly undemocratic as it was and still is, remains preferable to the absence of any sort of rule at all. Not that the rule of Assad is always preferable, of course. Not if the social, political forces are such that a popular movement is striving to take power, to win its freedom.

But that wasn’t the case in Syria, certainly after 2011, when a civil conflict was inflamed along sectarian lines. And without that native political alternative waiting in the wings, the attempted removal of the one stabilising force in much of Syria paved the way not to a nice, respectable, Western-looking democratic polity, but to myriad sectarian grabs for power, to interminable external intervention, with Turkey and Saudi Arabia to the fore, and, increasingly, to ISIS; it led, in a word, to barbarism.

Because that is what the past five years have consisted of: barbarism. The bald figures are striking. Out of Syria’s population of 23million, an estimated nine million have fled their homes, over three million of whom have left Syria completely, and just under half a million have been killed. A functioning state has been replaced by a disparate assortment of towns and territories, fought over by a dizzying array of militias, and too often won, brutally and mercilessly, by ISIS.

Which makes it all the more galling to hear Western politicians, backed by the media, now express their relief that ‘sanity’ looks like it’s being restored. Because it was their intervention over the past five years – first through delegitimising Assad, telling him he has no future, and then through arming his myriad opponents and anointing a new government-in-waiting, the Syrian National Council – that removed the barrier to barbarism and plunged Syria into ‘insanity’ in the first place. They may have enjoyed posturing against ISIS over the past couple of years, but they helped to create the space in which it could grow stronger. After all, it was they who helped undermine Assad’s regime; it was they who supported the regime’s opponents with funds and arms; and it was they who – unwittingly, unknowingly and unforgivably – invited what was to become ISIS to fill the vacuum left by Assad’s retreat. No wonder they’re relieved that Assad’s forces now appear to be turning the tide – he might just get them off the hook.

But that shouldn’t be allowed to happen. The barbaric consequences of this form of clownish intervention, where the do-gooding, battling-evil pose trumps everything, were all too predictable. They had been seen too many times before – in the former Yugoslavia, in Iraq, in Darfur, in Libya. First the ‘ethical’ intervention, accompanied by solemn words to the camera, and then the attempted removal of the Evil Dictator, and then… the ever-growing vacuum, the ever-enlarging absence of power, into which internal and external actors, mainly constituted along ethnic, sectarian lines, are then sucked to disordering, destabilising effect.

That’s why we at spiked were opposed to the meddling in the Arab Spring and in Syria in particular right from the start. That’s why we wrote in August 2012 that ‘by intervening into this conflict on one side, legitimising it and arming it, Western actors are deepening the ethnic divide and inflaming the violence’; that’s why we wrote in 2013 that the West had ‘exacerbated the conflict, deepened the divisions and shot down in flames any prospect for a negotiated settlement’. We didn’t need the rise of ISIS to tell us that the West’s attempts to aid the removal of Assad were barbarising; barbarism is inscribed in the shallow, vainglorious logic of contemporary Western intervention. Its imperative is good domestic PR; its effect chaotic and destabilising.

None of this is an endorsement of Assad, of course. The Syrian people deserve democracy as much as anyone else. But, as the liberation struggles of the past show, from the English Civil War and the American Revolution to the revolutions and anti-colonial struggles of the 20th century, such freedoms can only be won by the people themselves. Just as self-determination cannot be realised by another, so democracy cannot be imposed on a people from without. Western intervention doesn’t supplement struggles for freedom — it inhibits them.

So to the question of what could be worse than a dictator like Assad? Or, indeed, Saddam Hussein or Colonel Gaddafi or whoever happens to be the baddie du jour? The answer is there in Syria, in Iraq, in Libya. It’s writ large in their unravelling, their fracturing and their, brutal, lawless disorder. This is worse than Assad: the current situation, which our leaders helped to bring about.

Tim Black is a columnist at spiked, and editor of the spiked review.