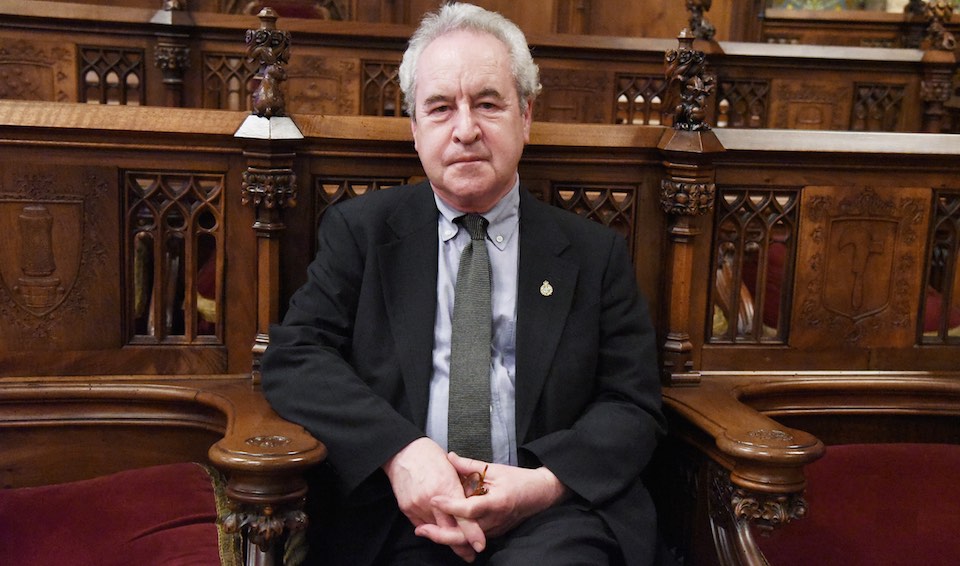 John Banville talks to Ella Whelan about Beckett, making it new, and the beauty of dishwasher instruction manuals.

With modernism, the tectonic plates of the Western literary tradition shifted – or, as Virginia Woolf (in)famously put it, ‘On or about December 1910, human character changed’. It was as if the old ways of doing, or writing, or, better still, representing things no longer held. In the hands of writers as various as Robert Musil or Franz Kafka or Samuel Beckett or James Joyce, literature was taken in dramatically new directions, at once endlessly, often linguistically self-conscious and also endlessly aiming beyond itself, at an absent God, a wasted tradition, a modern myth, an unexcavated interior world.

But what does a writer today make of this seismic shift? To answer this question and more, Ella Whelan spoke to the Irish master himself, John Banville, an author whose rich, reflexive novels, from the Booker Prize-winning The Sea to his trio of trilogies, draw deeply from air thick with modernist sensibilities. Indeed, he has been called ‘the heir to Proust’, ‘a great Irish fiction-writer who takes his bearings… from Beckett (among others)’, and, simply, ‘the best and most intelligent contemporary novelist writing today’.

Ella Whelan: You once said that the novelist cannot unlearn the lesson of modernism, that he cannot go back to realism as if the period between Henry James’ The Ambassadors (1903) and Samuel Beckett’s The Unnameable (1953) hadn’t happened. What do you think the chief lesson of modernism is?

John Banville: Perhaps what I should have said was that the artist cannot duck the challenge thrown down by modernism, the challenge best embodied in Ezra Pound’s famous injunction to ‘make it new’.

The great problem for the novelist is that, since human beings live by illusions, how is one to write about them authentically?

In fiction, I feel that Henry James was the first modernist. Obsessed, like his brother William, with the intricate processes that constitute consciousness, he devoted his life, certainly the latter half of it, to finding a mode in fictional art that would catch consciousness ‘on the wing’, so to speak. To a certain extent, he stumbled on that mode by accident, when he developed writer’s cramp and had to resort to dictation. This freed his imagination from the mundane constraints of pen on paper, or fingers on keys, and hence he developed an extraordinarily dense and subtle style that catches exactly the state of being conscious, which, when one thinks about it, is really a state of being semi-conscious.

Joyce acknowledged that no one actually thinks in the form of stream of consciousness – incidentally, a term invented by William James. To read late Henry James, however, is to feel that one is picking one’s way through the fog of consciousness itself, encountering all the barriers, false directions and misapprehensions that we do in our daily lives. James believed himself to be a realist, but for me he is the one who turned the art of fiction into… well, into art. And, nowadays, he is the one whose challenge I am grappling with.

Whelan: What do you make of author and critic Gabriel Josipovici’s headline-grabbing claim in What Ever Happened to Modernism? that British fiction has abandoned the legacy of modernism, and become narrow, conformist and parochial?

Banville: I don’t read enough contemporary British fiction to make this kind of judgement. What I do see of it, however, makes me lean in Josipovici’s direction. But then, later modernism did produce some awfully bad stuff – the kind of novels, indeed, written by writers whom Josipovici himself admired and approved of, too heavily indebted to Kafka and cocktail-party existentialism.

As I’ve said, for myself I follow the modernist trail blazed by Henry James, a trail from which avant-garde modernism sharply diverted, thanks to the likes of Gertrude Stein, Joyce and, later, Beckett – although I tend to think of Beckett as a sort of post-Christian mystic more than anything else – not forgetting, of course, the aridities of the nouveau roman. We should keep always in mind what Auden said: Everything changes except the avant-garde.

Banville: If it had to be a choice between Joyce and Beckett I would choose Beckett, of course. I admire Joyce, I admire him greatly, but I cannot love him, except in Dubliners, in certain passages of A Portrait of the Artist as a Young Man, and in some chapters of Ulysses – the opening domestic scene with Bloom and Molly is surely the last great gasp of the 19th-century realist tradition. Finnegans Wake I consider a great disaster.

Beckett’s work is transcendent, and, I think, unique, so I don’t know where I could follow him to. But I do bow down before him in humility, reverence and – if it’s not too strong a word – love.

Whelan: You noted that your first novel, Nightspawn, was perhaps too influenced by Beckett. Do you think a writer can, or indeed ought, ever to be free from ‘the anxiety of influence’?

Banville: I think Nightspawn was too much influenced by The Alexandria Quartet! Lawrence Durrell’s wonderful phantasmagoria, so ripe and lush and soaked in fake sophistication, was irresistible to a young man trying to fly by the nets of Irish quaintness and charm and be an ‘international’ writer. ‘Write about what you don’t know!’ – that was my motto. I think Eliot was right when he said that the inexperienced artist borrows, the experienced one steals. And no, I don’t think the writer ever cures himself of the anxiety of influence; but then, it’s only one among the myriad anxieties he labours under.

Whelan: You once said that beauty was crucial to your work, and that you admired Beckett’s writing for its ability to pursue the beauty of language as an end in itself. Is this your idea of beauty, too? And, if so, how does your aesthetic differ from Beckett’s negative aesthetic?

Banville: Oh, I’m utterly unlike Beckett, whatever purblind reviewers may say. I deplore his negative aesthetic, while recognising that, for him, it worked wonders. Ill Seen Ill Said seems to me one of the essential texts – I was going to say of the 20th century, but why impose limits? It’s an essential text, and one of the most beautiful I know. ‘Beauty’, of course, is a slippery concept. For me, it is inextricably bound up with the sentence, which is the monad of my work.

Whelan: Be it Frederick Montgomery in The Book of Evidence or Oliver in The Blue Guitar, your first-person narrators seem almost to dramatise the act of linguistic self-expression. Do you think the extent to which language itself has become a novelist’s theme is a legacy of modernism?

Banville: Well, this is a very large question, because of course we have to look back at the circumstances out of which modernism sprang – the inanition of the fin de siècle, the sense of a world coming to an end, the cataclysm of the Great War. Suddenly, everything was put in doubt, including language itself. We still live in the Age of Uncertainty. When Joyce declares that ‘Horseness is the whatness of allhorse’, he is whistling past the graveyard, where the old sureties are buried. Say ‘horse’ seven or eight times in rapid succession and it ceases to be a sound and becomes a noise. For the modernists, and for us postmodernists, to write is to be in a constant state of vertigo. Which is perhaps no bad thing, the world being a vertiginous phenomenon.

Whelan: You also, of course, write crime novels as Benjamin Black. Do you think the distinction between literary fiction and so-called genre fiction, which has its roots in the modernist moment, is valuable?

Banville: When my wife and I bought our first dishwasher, the instruction booklet that came with it was a thing of beauty, written in crisp, clean, clear prose, a delight to read. Good writing can happen anywhere, in any form and any genre – Georges Simenon is, for me, a very great writer. Yes, the modernists had a distinct strain of contempt for the ‘masses’, but in the best of them it was defensive. Yet Eliot had an ambition to write material for music-hall singer Marie Lloyd, the only book Joyce ever endorsed was Gentlemen Prefer Blondes, while Beckett, as we know, considered Buster Keaton a genius. And I, in my little way, am determined someday to write a pantomime of surpassing beauty…