The rise of Sanders and Trump reflects the decay of the establishment. 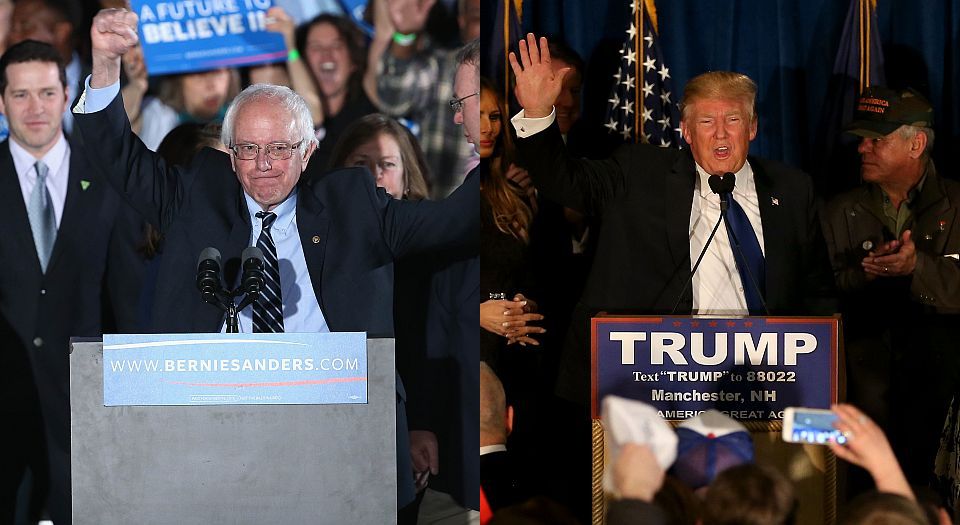 If someone had told you a year ago that Donald Trump and Bernie Sanders would win the New Hampshire primaries, you would have said they were crazy. And yet here we are.

It’s easy to forget how amazing this result is, given that opinion polls have been predicting this outcome for weeks. But votes are real, they count. And a presidential contest in November between a reality-TV star and an obscure socialist is now a real possibility.

It is not simply the fact that these two outsiders won that is so surprising, it is that their margins of victory were so decisive. Sanders beat Democratic rival Hillary Clinton by 22 percentage points – 60 per cent to 38 per cent. Trump’s share of the Republican vote, at 35 per cent, was more than twice the vote earned by the second-place finisher, John Kasich, at 16 per cent. Moreover, the two upstarts gained support across all demographics within their respective parties. Sanders won votes from women and men; from those with a college degree and those without; and from independents as well as Democrats. (Hillary’s consolation: she won the 65-and-older vote, and votes from those earning more than $200,000 a year.) Likewise, Trump swept the board in all categories among Republican voters.

The fact that insurgents in both major parties won in New Hampshire indicates that what we’re witnessing is a broader crisis of the American political establishment, not a problem limited to one particular party or candidate. Sure, you can identify certain strengths that Trump and Sanders have, and reasons why they are appealing to their supporters. But what is really driving these outsiders to the top is the decay of the old politics and collapse of the party machines. Trump and Sanders are at the right place at the right time.

The backlash against the party hierarchies and their standard-bearers was reflected in the exit-poll interviews. Republican voters said they sought a candidate ‘outside the establishment’, and felt ‘betrayed by the Republican Party’. They also said they wanted a nominee who will ‘tell it like it is’ – something they clearly believe the establishment candidates are incapable of doing. Among Democrats, the most important qualities voters wanted in a candidate were honesty and trustworthiness, traits which Clinton scores poorly on.

It’s not that Sanders and Clinton have starkly different ideologies, nor that Trump and his rivals differ dramatically when it comes to policies. First and foremost, this result is a reaction against, and a rejection of, the party machines. The upstarts are cohering support around a critique of the elite, including the elites which run their respective parties. Furthermore, supporters of Trump and Sanders often cite the poor personal qualities of the establishment candidates, which is understood as a wider problem among members of the party elites.

Discontent with the political establishment has been a gathering storm for some time now. Trust in politicians is at a record low. People have been leaving the two main parties, and becoming unaffiliated. And the establishment appears to take them for granted. Many voters feel they are treated like fodder, expected to turn out on election day even though nothing has been done for them since the previous election. And worse still, some voters (like the white working class) are effectively considered dumb and bigoted, by both left and right. Such a situation can only go on for so long, and last night was the revenge of the neglected and denigrated.

Adding fuel to the fire has been the way the party leaders have ineptly responded to the emergence of Trump and Sanders. Their counterattacks have backfired on them, and actually provided more support for the insurgents. Consider the ways the party elites have mishandled their responses:

For the party-establishment types who want to fight, New Hampshire indicates some troubles ahead. On the Democrat side, yes, Hillary still has big structural advantages, in terms of money and support from the so-called super-delegates (additional delegates, representing about a third of total Democrat delegates, who are unelected; if the primaries end in a close finish between Clinton and Sanders, the super-delegates should swing it for Clinton). But the enthusiasm and momentum is on the Sanders side. And the big, and possibly insurmountable, problem facing Hillary is that the race has become a verdict on her, personally. This means that any political arguments she can muster in response to Sanders may be ignored, because Hillary is just too flawed a messenger.

Last night was particularly bad for the Republican establishment’s plans. They had hoped that their favoured son, Marco Rubio, would see off the other ‘establishment lane’ candidates. But those hopes were dashed on Saturday night, when Rubio had a disastrous debate performance (in response to the criticism that he was too scripted and repetitive, Rubio decided to repeat the same talking point over and over – leading him to be dubbed ‘Marco Roboto’). In New Hampshire, the establishment’s preferred candidates (Rubio, Jeb Bush and John Kasich) ended up bunched up around 10 to 11 percent of the vote, and therefore all go forward, leaving the party still badly splintered.

The Republican establishment might take solace in the fact that the combined vote of all of the candidates acceptable to them adds up to more than Trump’s total, but there is no sign of these votes being consolidated by a single candidate anytime soon. Furthermore, there’s no guarantee that, if a single opponent does eventually emerge, they can actually beat Trump and/or Cruz.

Of course, it’s still very early. Trump versus Sanders may be a real possibility, but so is Bush versus Clinton, despite their recent travails. Nevertheless, last night the voters delivered a negative verdict on the political elites of both parties, a verdict that should have the elites very worried.