The declaration of man as pestilence on the planet is adolescent and tedious. 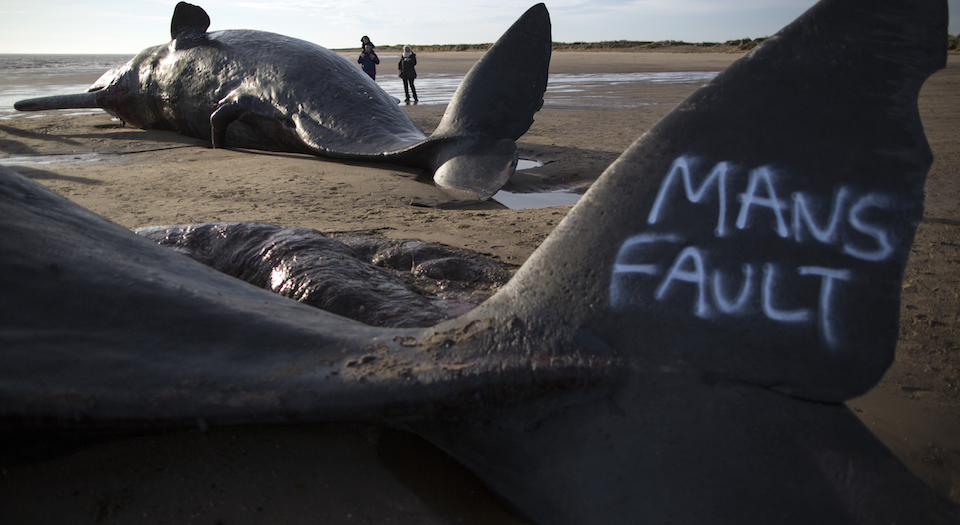 It was grimly fitting that in the same week we remember those who perished in the Holocaust, anti-nuclear protesters should spray-paint the legend ‘mans [sic] fault’ on to a dead whale in Skegness. For both the Holocaust and environmental degradation are totems for today’s misanthropes and anti-humanists, for whom man’s presence on the planet is but a pestilence.

It is a spirit epitomised by a parliamentary motion of 2004 that pronounced humanity to be ‘obscene, perverted, cruel, uncivilised and lethal’ and ‘looks forward to the day when the inevitable asteroid slams into the Earth and wipes them out thus giving nature the opportunity to start again’. It was signed by three people. One was the late Tony Banks. The other two were John McDonnell and Jeremy Corbyn.

The Holocaust was a grave psychological blow for Western civilization, and while it’s understood by most as a monstrous aberration, there has grown the sentiment that it was actually the reverse, that it was the culmination of the ‘Enlightenment project’, and not the rejection of it. This narrative has been popularised by the sociologist Zygmunt Bauman, whose book Modernity and the Holocaust (1989) asserted that Auschwitz was the end result of the Enlightenment’s desire to classify, rationalise and ‘to Other’. It was detached, bureaucratic, industrialised slaughter. It was the cool, calculating spirit of modernity that made it possible for cruel things to ‘be done by non-cruel people’.

Postmodernism – or rather, anti-modernism – had its tangible roots in the unfolding shortcomings of Communist states during the 1950s and 1960s and the associated crisis of faith among socialists. Fuelled by the teachings of Herbert Marcuse and his ‘one-dimensional man’ and Theodor Adorno’s ‘administered society’, antimodernism – with its tenets of relativism and subjectivity – blossomed. Modernity was now viewed as oppressive and lethal. Hospitals are no better than prisons, said Michel Foucault. ‘For modernity in its bureaucratic modernity has been discerned everywhere from Auschwitz to McDonald’s’ wrote the sociologist, David Lyon, in 1994 (1).

Bauman’s philosophy that the Holocaust was the Enlightenment writ large filtered down from university seminars in much the same way as Foucault’s theory of omnipotent, ubiquitous invisible power has given birth to Safe Spaces. Edward Said’s writings on ‘orientalism’ have created the notion of subjective, white ‘privileged’ knowledge.

Yet such romantic primitivism is nothing new. In the early-19th century, romantic writers and poets were revolted by industry and modernity – as embodied in Mary Shelley’s 1818 novel Frankenstein. In the 1920s and 1930s, anthropologists in search of innocent, exotic tribes made a comparable journey. Margaret Mead’s 1928 work Coming of Age in Samoa exemplified this new exoticism, with its discredited accounts of that island’s prelapsarian state and the arcadian condition of its inhabitants.

There is also something age-old afoot here. Man has always had the capacity for cruelty. The Holocaust remains shocking and is regarded as exceptional because of its sheer scale, and because it’s in living memory (it also serves as a moral benchmark in a society no longer sure of its values). Yet otherwise, the Holocaust tells us nothing revealing about human beings. It teaches us no lessons. Bauman wrote that science and technology take us to the gas chamber. Yet ever since neolithic man used twine to attach a flint to a stick and make an arrow, man has employed technology in order to kill other men.

Last week in Kenya, there was found the 10,000-year-old remains of 27 people, including young children and heavily pregnant women, beaten, stabbed and shot with arrows, tied up and thrown into a lagoon. In York a large grave containing 80 men was also discovered, dating back to Roman times. Some bodies were beaten in the head with hammers. Most were decapitated.

Such discoveries, like the Holocaust, expose nothing profound about the human condition. Men, who are tribal by nature, have always killed ‘the Other’. They have always used technology and they always will. If present-day misanthropes feel that modern, Western man is a plague on the planet, then they must hate all humanity throughout the ages.

Today’s misanthropic, ‘back-to-nature’ romanticism is but another adolescent manifestation of the revolt of the civilised against civilisation. Just as teenagers will always rebel against their parents, these types will be forever with us, too.

Ultimately, for all its achievements, such as medicine, symphonies, cathedrals, cities and space travel, humanity is neither to be worshipped or to be reviled. Man just is.

The greatest achievement of Deutschland 83, the Cold War drama currently showing on Channel 4, is that most of us are rooting for the East Germans. We know we shouldn’t be, because despite the innocent, wide-eyed charm of its protagonist, the border-guard Martin Rauch (Jonas Nay), the East German state is portrayed here in all its naive, paranoid callousness while the Western peaceniks are spoilt, immature dupes of the Stasi.

Deutschland 83 is free of all the Ostalgie we heard about 15 years ago, as embodied by the 2003 film Good Bye Lenin! That sweet, callow movie echoed the sentiment that even if the DDR was inefficient and repressive, people weren’t obsessed by material wealth and there was greater community feeling.

Ostalgie was a natural demographic response of the early 2000s. People who reach their thirties tend to romanticise the years of their infancy, and Germans coming of age today don’t even remember Communism. This is why people in their forties now, like me, are Deutschland 83’s natural audience. The 1980s for us weren’t Thatcherism, the Miner’s Strike and three million unemployed. For us it was Walkmans, floppy disks and Duran Duran.

As you will have read on spiked earlier this week, students are fighting back against the culture of censorship on university campuses. This is heartening news, not least for students themselves, who have started to become unfairly maligned and stereotyped as intolerant buffoons.

Over the last 12 months I’ve spent much time at the Canterbury campus of the University of Kent, which has an excellent library. Its student union is now rated green on spiked’s Free Speech University Rankings, which rings true. I’ve never seen a sign telling students what they can and can’t say, never seen directions for Safe Spaces or ever opened a library book containing a ‘trigger warning’. The toilets are decorated in irreverent and obscene graffiti. Women don’t scowl when you open doors for them, but smile courteously. Students chat about the antics of the night before or worry that they haven’t revised enough for their exams.

These students seem pretty normal to me.