Storm Frank: what’s in a name?

The decision to name the storms causing the floods reveals our newfound fear of weather. 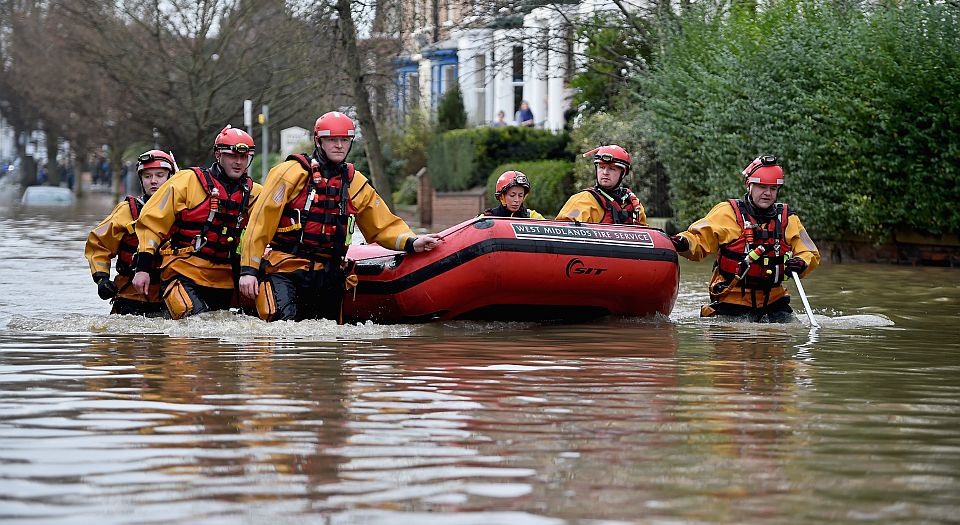 The news in the UK over the holiday period has been dominated by flooding in the north of England and Scotland. While most people were revelling in Christmas festivities, thousands of families saw their homes swamped with water as rivers broke their banks in Cumbria, Lancashire, Northumberland, Yorkshire and parts of Scotland. Pictures of streets looking more like rivers have been all too frequent over recent years, as one flooding event has followed another. December’s record-breaking rainfall was a product of a string of Atlantic depressions associated with warmer and wetter conditions in the northern hemisphere, probably related to El Niño (the reversal of the southern Pacific Ocean current bringing warmer waters to the Americas).

One thing that was different about the December floods was that back in September the UK Met Office and Ireland’s Met Éireann made the decision to give names to Atlantic depressions, in alphabetical order and alternating male and female names, as is done in the US with the tracking of tropical storms and hurricanes. Come December, newspaper headlines led with warnings of the encroaching storms Desmond, Eva and Frank. It is worth asking why the Met Office elected to do this, and whether this reveals anything new about our relationship with wet and windy weather.

In its own words, the Met Office reports that naming storms is a pilot study to ‘raise awareness of extreme weather before it strikes’, in the hope of keeping people, ‘their property and businesses safe’. Back in September, nobody was predicting the record-breaking precipitation that has hit the north of England and Scotland, with some places receiving 200 to 300 per cent of their average rainfall for the time of year. On the one hand, it is possible to see the practical benefits of tracking depressions (areas of low air pressure) through the use of names (although meteorologists already do this with letters). On the other hand, the naming of depressions appears to be more for the benefit of the public than weather forecasters. Adopting a practice which in the US is used to track potential hurricanes does smack of trying to big-up the weather over the British Isles.

Tropical storms are larger and contain more energy because they develop over warmer tropical water (greater than 27 degrees Celsius). The energy from the warm water feeds the developing vortex at the centre of the storm, which may or may not grow into a hurricane (or in Asia, a typhoon) depending on oceanic and atmospheric conditions and the path of the storm. Some of the depressions that reach the British Isles are remnants of hurricanes and other storms that originated in tropical regions, but their energy is dissipated as they travel over cooler waters. It is extremely rare for hurricanes to reach our shores – the ‘Great Storm’ of 1987 being one exception.

While it may be no consolation to people whose houses and streets have been flooded, Atlantic depressions are not of the same magnitude and do less damage than tropical storms and hurricanes. Giving them names, in the same way hurricanes are given names, elevates their significance in order to make us more ‘aware’ of potentially extreme weather. This fits a pattern in which our relationship to the weather is continually interpreted through the lens of global warming and risk management. Today, weather is not just something that happens and is mostly beyond our control. Instead, we view weather, especially extreme events, as somehow connected to the way we live our lives. While human activity has contributed to a warming planet, this does not make us responsible for any given storm or flooding event. Climate change is a matter of government policy, and is reinforced across society with messages of how we need to reduce our carbon footprint to tackle global warming. Therefore, it is no wonder that flooding gets interpreted as a failure of policy, and results in a subsequent search for somebody to blame.

It is also too simplistic to link flooding to individual storms. Flooding is the result of a combination of factors, linked to prior weather conditions and local geography. The degree of soil saturation is a key determinant of where the water goes when it hits the ground, as is rock type and the timeframe over which the rain falls. So, when the River Ouse broke its banks in York, it was not because of a direct hit by Storm Eva, but rather because the rain that followed.

While we can be thankful that fatalities from the December storms were minimal, the naming of storms has clearly failed in its objective of keeping ‘properties and businesses safe’. Residents in flooded towns and cities are rightfully angry. While the government has invested in flood defences, and there are examples of successful schemes (White Cart Water in Glasgow and the Thames Barrier), overall funding for flood defences is down. The British Isles clearly has a problem with sustained heavy rainfall associated with prevailing Atlantic winds and settlements located in vulnerable parts of drainage basins. So, more needs to be done to stymie the impact of the floods.

Keswick in the Lake District is one example of a town that is susceptible to flooding. After widespread flooding in 2009, state-of-the-art flood defences were added to protect the town. However, its downstream geographical location within the drainage basin means that the river cannot hold the volume of water associated with extreme precipitation events like the December storms. In a drainage basin, streams feed into rivers, which in turn feed into larger rivers with a cumulative impact on river discharge. When settlements are located at points of confluence (like Keswick and York), or near the mouth of the drainage basin (Carlisle), they are especially prone to flooding.

Plenty can be done to reduce the risk of flooding, such as building defensive walls, deepening and straightening rivers, reducing obstacles like bridges, slowing the run-off of water upstream by adding vegetation to intercept rainfall or building reservoirs. Many such schemes have been tried, but often they have failed to enable rivers to hold extreme levels of rainfall.

What is needed is an approach that shows more imagination and greater political will. When the Chinese built the Three Gorges Dam, the largest ever constructed, they relocated 13 cities, 140 towns and 1,350 villages. While this may sound extreme, flooding from the Yangtze River has been responsible for the loss of hundreds of thousands of lives and untold damage to property over the years. In Malaysia, a tunnel has recently been opened under Kuala Lumpur which on most days serves as a motorway for urban traffic. However, in times of heavy rainfall, cars take an alternative route and the tunnel is used to divert water under the city.

If we are to avoid repeated scenes of families being rescued from their homes and properties being destroyed by floodwater, we need some blue-sky thinking and serious investment. It is time we started raising houses above the floodplain, diverting rivers, moving settlements or adding forests and reservoirs to reduce and slow run-off. Holland has learned to live with sea-defences to protect its low-lying land. Chile (which runs along a tectonic-plate boundary) has developed expertise in seismology and earthquake-resistant buildings. The US does its best to cope with hurricanes and tornadoes. In the UK, we already have expertise in hydrology – it is time we applied this to reshape our urban environment and properly defend it against flooding. This won’t be easy, and it would mean uprooting some families. But it is surely better than ‘raising awareness’ and hoping for the best.