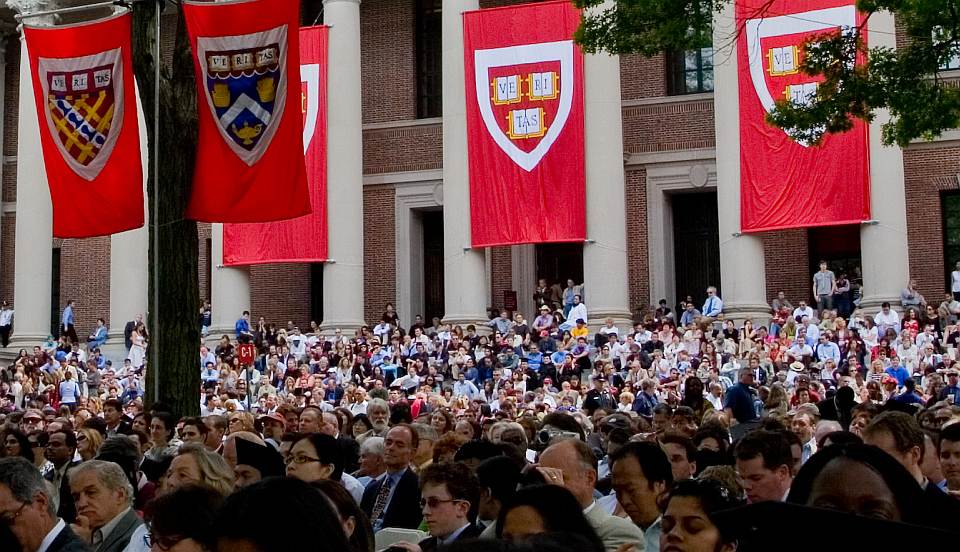 Upon entering their residential dining halls last week, Harvard undergraduates were greeted not only by silverware and water glasses, but also by what was duly labelled a ‘holiday placemat for social justice’. The Harvard College office for equity, diversity and inclusion, in conjunction with the freshman dean’s office, created the placemat so that students could, while home for the holidays, defend (and presumably propagate) the social and political views that have become accepted truth on campus.

Clearly, university administrators have begun to detect that the ideological positions that reign in their special and increasingly isolated societies might require explaining to the real world outside – a world now perhaps just beginning to view the nation’s universities as places where the totalitarian impulse runs rampant: one where the First Amendment and due process of law are considered tools of oppression rather than attributes of free citizens. Thus did Harvard administrators come up with the idea of arming their students with placemats – tools to advance their efforts as missionaries to the benighted family members at home when they return to visit for the upcoming holidays.

Lest the students have inadequately absorbed the social-justice mantras pounded into their minds – teachings that have become the be-all and end-all of higher education at most US colleges and universities – the mats offered guidance in the way to answer certain hot-button political and social questions. The placemats listed four issues of the day: Yale/student activism; Islamophobia/refugees; housemaster title; black murders in the street; and proposed answers to hypothetical questions that students might be asked:

‘Why are Black students complaining? Shouldn’t they be happy to be in college?’

‘We shouldn’t let anyone in the US from Syria. We can’t guarantee that terrorists won’t infiltrate the ranks of refugees. They’ve already done it in France.’

‘What does a housemaster have to do with slavery? It’s not related to that at all.’

‘Why didn’t they just listen to the officer? If they had just obeyed the law this wouldn’t have happened.’

Proposed answers, according to the reigning student-life bureaucrats, include:

‘When I hear students expressing their experiences of racism on campus I don’t hear complaining. Instead I hear young people uplifting a situation that I may not experience.’

‘Given the name [housemaster] is offensive to groups of people, it doesn’t seem onerous to change it.’

‘Do you think the response would be the same if it was a white person being pulled over?’

While ostensibly offering ‘tips for talking to families’ in general, the placemats seemed to be targeted particularly at white students, who have presumably racist/xenophobic relatives back home.

There is, it turns out, a bright side to this otherwise depressing affair. A small group of brave and principled students, who identified themselves as ‘representatives of the Harvard undergraduate council’, made themselves heard and announced their outraged opposition to the administration’s latest experiment in thought control. A truly diverse array (just judging by last names such as Biebelberg, Ely, Gupta, Kelley, Khansarinia, Kim, Popovski and so forth) wrote ‘to express concern regarding’ the placemat dissemination. ‘Reject[ing] the premise that there is a “right” way to answer the questions posed’, the protesting students affirmed that ‘we should work to foster a climate that is conducive to frank, open discussion – especially among students who disagree’. The placemat, they complained, ‘gives the impression that the points it articulates are positions endorsed by the college and, more disturbingly, positions that the college thinks students should hold’. College, concluded the students, ‘should engage in the task of helping students to think and speak for themselves, not telling them what to think and what to say’.

In other words, the students were asking to be educated, not indoctrinated.

When confronted by this small but consequential and obviously worrisome revolt, and with the outside world sure to soon learn about the placemat exercise and the students’ response, the student-life bureaucracy went into damage-control mode. The student-life administration wrote to apologise (in an email to the entire undergraduate body) for how the placemat ‘was not effectively presented’ and ’caused confusion in our community’. There followed the obligatory obeisance to ‘academic freedom’ being ‘central to all that Harvard College stands for’. The dean of student life and the dean of freshmen (who each signed the message) pledged henceforth to ‘support the growth and the development of independent minds’. (But, one might ask, isn’t that the traditional role of the faculty rather than the bureaucrats?)

It was unsurprising to me to discover that this placemat scheme was, in part, sponsored by the freshman dean’s office, which has previously (and continuously) treated its students as impressionable children, requiring training in political and social attitudes. In 2012, the dean of freshmen, Thomas Dingman, attempted to coerce first-year undergraduates into signing a ‘kindness oath’ that would be posted in the lobby of every freshman dormitory, affirming their belief that ‘the exercise of kindness holds a place on a par with intellectual attainment’. Dingman unexpectedly faced push-back from students and faculty, and some unwelcome, unkind publicity. He backed down and resolved instead to deal with kindness at the tendentious orientation sessions held each year for incoming freshmen – a non-public forum protected against the watchful eyes of upperclassmen, the undergraduate council, the news media, and, for that matter, alumni and donors.

The mission creep of the freshman dean’s office’s programming, however, now threatens the legitimate educational mission of the entire undergraduate college, as the students seem to understand better than the administration. And that office, now joined by the newly created and Orwellian-named Harvard College office for equity, diversity and inclusion that signed the placemat, makes the threat especially potent, since ‘diversity’ seems now to be defined as students who look different but think the same.

Resistance to overbearing political indoctrination at Harvard and elsewhere is gradually gaining steam as professors, students, parents, alumni, courts, and other observers of higher education increasingly recognise the destructive potential of administrative assaults on traditional academic freedom (not to mention the feckless submissiveness that administrators have shown to the tyranny of student demands that are incompatible with the whole notion of the liberal arts academy). One thing seems clear: the bureaucrats may engage in tactical retreats when supporters of academic freedom shed their reticence and fight back, but will nonetheless retrench and continue to pursue their agendas, expand their power and retain their bloated numbers and salaries.

Meanwhile, higher-level university officers and trustees will continue to raise gobs of money from alumni and other donors who have little idea how their funds are being spent, while public-relations specialists will continue to spew out glossy publications and upbeat press releases extolling the liberal-arts academy’s educational mission. Today’s campuses are, it seems, increasingly becoming a combination of asylums run by the inmates, and Potemkin Villages designed to hide the truth.

Harvey Silverglate, a civil-liberties and criminal defence lawyer and writer, is co-founder and Board member of the Foundation for Individual Rights in Education (FIRE), and co-author of The Shadow University: The Betrayal of Liberty on America’s Campuses (The Free Press, 1998). The author thanks paralegal Timothy C Moore for his assistance.

Picture by: Ken Schwarz, published under a creative commons license.