If we’re serious about free speech, we should say ‘Je Suis Dieudonné’

Hateful people must be as free as decent people to express their beliefs. 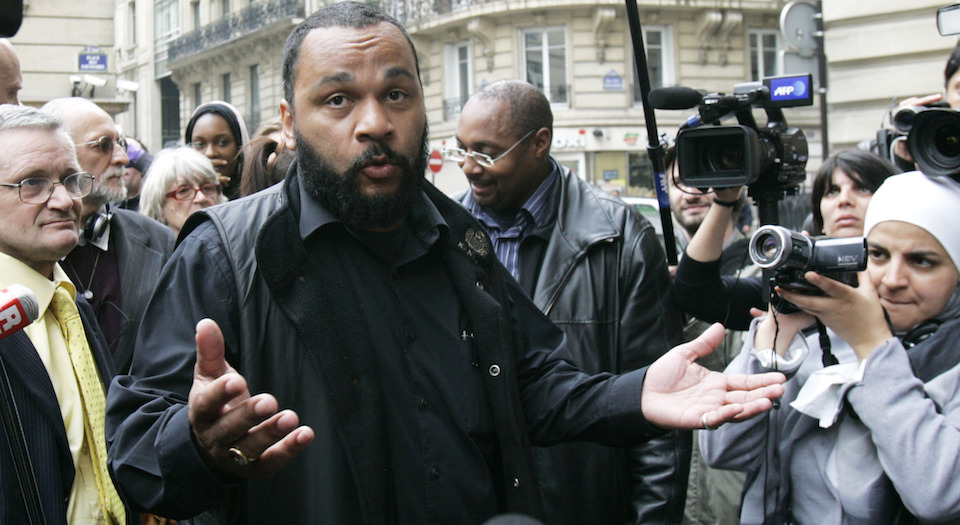 It’s the 21st century and Europe is meant to be an open, enlightened continent, and yet a man has just been sentenced to jail — actual jail — for something that he said. Will there be uproar? It’s unlikely. For the man is Dieudonné M’bala M’bala, the French comedian, and what he says — that Jews are scoundrels and the Holocaust is a fiction — is deeply unpleasant. Yet if we’re serious about freedom of speech, if we are truly committed to ensuring everyone has the liberty to think and say whatever they please, then the jailing of Dieudonné should outrage us as much as the attempts to shut down Charlie Hebdo or the jailing of a Saudi blogger for ridiculing religious belief. We should be saying ‘Je Suis Dieudonné’.

Due to the regimen of hate-speech laws in 21st-century Europe — which police and punish everything from Holocaust denial to Christian denunciations of homosexuality — Dieudonné has been having run-ins with the law for years. In 2009, a French court fined him €10,000 for inviting a Holocaust denier on stage during a gig. In March this year, a French court gave him a two-month suspended prison sentence for saying he sympathised with the attack on Charlie Hebdo and with the anti-Semite who murdered Jews at a Parisian supermarket a few days later. Now, this week, a Belgian court has given him an actual prison sentence: a court in Liège found him guilty of incitement to hatred for making anti-Semitic comments during a recent show and condemned him to two months in jail.

In all these cases, Dieudonné has been punished simply for thinking and saying certain things. This is thought-policing. It’s a PC, spat-and-polished version of the Inquisition, which was likewise in the business of raining punishment upon those who said things the authorities considered wicked. To fine or imprison people for expressing their beliefs is always a scandal, regardless of whether we like or hate their beliefs. Dieudonné really believes the Holocaust is a myth, as much as a Christian fundamentalist believes that people who have gay sex will go to hell or American liberals believe Hillary Clinton will make a good president. He is wrong, massively, poisonously so; but then, so are those Christians about gays and those liberals about Hillary. If every person who says wrong, malicious or stupid things were carted off to jail, Europe’s streets would be emptied overnight.

There are two reasons we should be furious about Dieudonné’s sentence. The first is that it sets an extremely dangerous precedent, or rather boosts an already established precedent whereby the state in Europe has assumed the authority to punish not only criminal action and violent behaviour, but also thought and speech. Anyone who feels tempted to smirk at the imprisonment of a lumbering, unfunny anti-Semite should think very carefully, for the authorities haven’t only flexed their muscles against Dieudonné — they’ve asserted their dominion over thought itself, over emotion (particularly hatred), over the right of people to say out loud what lurks in their hearts. The jailing of Dieudonné represents a further encroachment by officialdom into the psychic, emotional lives of their citizens.

Europe’s hate-speech laws do not merely punish explicitly racist stuff (which would be bad enough). They have also been used against people who are seen as possessing the wrong moral beliefs. From the Swedish Christian pastor given a one-month suspended prison sentence for describing homosexuality as a tumour on society to the former actress Brigitte Bardot being fined 30,000 francs for railing against the ‘barbaric’ way in which Muslims slaughter animals for meat, people are being punished for their deeply held, if unpopular convictions. This is the logic of anti-hatred laws: once the state is invited to monitor and govern thought, then anyone who is nasty or edgy or different becomes fair game.

Jewish groups cheering the jailing of Dieudonné should consider the fact that, informally at least, on campuses, Zionism is now treated as ‘hate speech’ and is frequently shut down by intolerant self-styled warriors against ‘prejudice’. The institutionalisation of hate-policing is generating armies of censors keen to shut up things they find offensive or wrong; it gives people a licence to silence ideas that they hate.

The second reason we should oppose the arrest of people like Dieudonné is because censorship is the worst tool imaginable for combatting real prejudice. It is precisely if you are opposed to Dieudonné’s thinking that you must defend Dieudonné’s freedom of speech, because it is only through hearing his ideas that we can know them, expose them, and challenge them.

People who are serious about standing up to the foul ideologies of racism, anti-Semitism and Holocaust denial should not seek to silence such ideas but rather should welcome their expression. Because it’s only in a free, rowdy public sphere that we can argue against them and potentially defeat them. Forbidding the expression of such ideas makes it more difficult for those of us who take seriously our responsibility as citizens to shine the light of reason on this dark and backward way of thinking, which allows the thinking to fester and grow, underground, far from the rationalism and corrections of the rest of us.

To criminalise Holocaust denial is to turn it into an edgy ideology that will be embraced by many of the alienated as a kind of stupid rebellion against what they see as a defensive and uncaring state. In the underbelly of the internet, in smoky halls in French and Belgian suburbs, some youths say things they aren’t allowed to say in public — or listen to Dieudonné saying them — and in those cut-off, anti-social bubbles their prejudices become more fixed, free from the mocking or questioning of those who aren’t racist and who know that the Holocaust happened. Censoring racial hatred doesn’t challenge it; it can intensify it.

It is incredibly illiberal for the state to police hatred. Hatred might not be big or clever, but it’s only an emotion. And officialdom has no business telling us what we may feel — or think, or say, or write. Allowing the state to monitor belief represents a brutal reversal of the Enlightenment itself. John Locke, in his Letter Concerning Toleration (1689), set the tone for the Enlightenment as an attempt to ‘settle the bounds’ between the business of government and the business of morality. ‘The business of laws is not to provide for the truth of opinions, but for the safety and security of every particular man’s goods and person’, he wrote. That ideal is now turned on its head. Across Europe, governments ‘provide for the truth of opinions’, and in the process they silence those they don’t like and patronise the rest of us, reducing us to imbeciles incapable of working out what is right and wrong, and of speaking out against the wrong.

All hate-speech laws should be scrapped. Dieudonné should be freed. And a continent whose governments argue against the imprisonment of bloggers in Saudi Arabia while jailing comedians at home needs to take a long, hard look in the mirror.