This crusade against unwitting racism is deeply divisive. 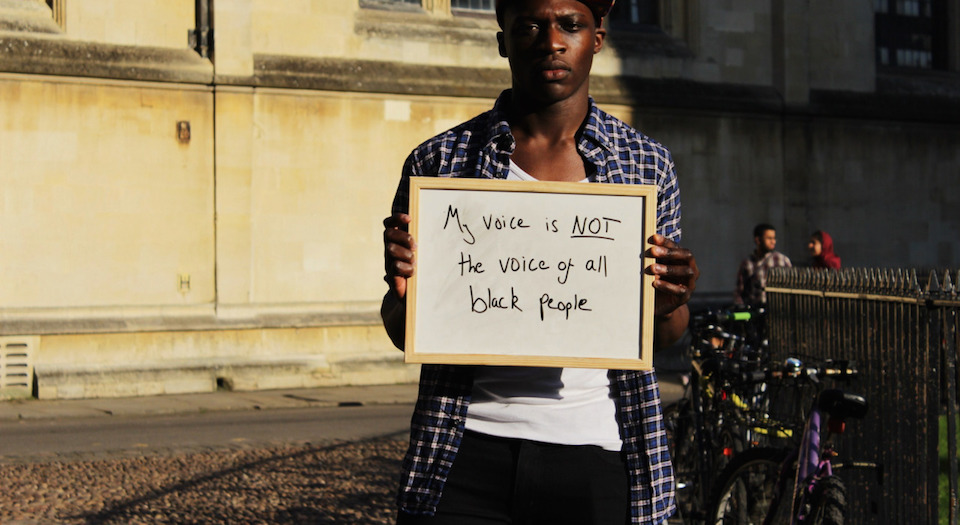 Today, we are forever scrutinising our dialogue and conversation, looking out for offensive and insulting content. Of course, words, especially demeaning or degrading ones, have always had the capacity to hurt people’s feelings. But it’s different today. Words don’t just insult; no, today they inflict verbal violence, they traumatise.

While words are considered to be incredibly powerful today, it’s also true that people are deemed massively vulnerable, and unable to deal with hostile words. Even everyday verbal exchanges, no matter how casual, can be indicted for causing offence. This inquisitorial attitude towards everyday speech is perfectly captured by ‘Everyday Racism’, a video produced by BBC3.

‘Everyday Racism’ offers numerous examples of so-called microaggressions. Its message is that racism is so banal that just about anything a white person says is likely to contain traces of prejudice. A typical example of an everyday, racist microaggression is the question, ‘where are you from?’. According to microaggression experts, this question is a covert way of saying ‘you don’t belong here’.

Watching this inane video, which the Daily Mirror described as a ‘shocking’ expose of the ‘unbelievable racial stereotypes ethnic minorities face’, I was reminded of the first time I encountered the conceit of microaggression. Ever since I’ve been able to afford taxis, I have always asked cabbies with unusual surnames, ‘where are you from?’. I’m fascinated by people’s names and origins, and enjoy discussing cabbies’ personal stories with them. But it wasn’t until last November that I discovered my curiosity regarding people’s origins can now be condemned as an act of microaggression. I was in New York and, after a five-minute exchange with an Ethiopian taxi about our mutual origins, a Boston-based academic told me my questions could be perceived as microaggressions.

Until then, I had always dismissed microaggressions as too silly to take seriously. But these are strange times. Microaggression refers to the allegedly subconscious offence that your words cause to individuals and cultural groups. According to ‘Tool: Recognising Microaggressions and the Messages They Send’, the Orwellian-sounding guidelines circulated by the University of California in Los Angeles (UCLA), I was indeed guilty as charged. Apparently, asking ‘Where are you from or where were you born?’ conveys the message that ‘you are not a true American’. Presumably, if I repeat this question in London I am saying, ‘you are not a true Brit’.

What’s fascinating about the UCLA guidelines is that anything that is said to someone from a different cultural group may constitute a microaggression. So, declaring that ‘America is the land of opportunity’ could be construed as a microaggression because it implies that ‘race or gender does not play a role in life successes’. There seems to be a veritable industry producing guidelines, running sensitivity seminars and creating microaggression-awareness websites. At the same time, the number and variety of words and expressions castigated as aggressive and threatening are constantly expanding. The Inclusive Excellence Center at the University of Wisconsin declared that the latest addition to its list of censored terms is ‘politically correct’. Without a hint of irony, it said that PC has become a ‘dismissive term’, used to suggest that ‘people are being too “sensitive”, and police language’. By attempting to censor the phrase ‘politically correct’, microaggression-watchers proved they were indeed in the business of policing language.

Campaigns designed to tackle microaggressions have spread far beyond American campuses. In the UK, the denunciation of microaggressions has seamlessly meshed with the obsessive search for harmful gestures and words associated with everyday sexism and everyday racism. It is only a matter of time before the ‘everyday outrage’ movement is launched to cover the entirety of everyday life.

The performance of outrage is a central feature of the moral crusade against microaggression. There is a mushrooming of microaggression websites where likeminded victims are encouraged to air their grievances and broadcast their concerns in order to raise the awareness of those who are blind to the pandemic of microaggression enveloping the world. Typically these websites feature individuals holding signs with a message of studied defiance directed against the microaggressor. So, students from Oxford have copied the I, Too, Am Harvard campaign, which highlights the unintended slights and insults suffered by black students. On the I, Too, Am Oxford website, individuals post pictures of themselves holding signs advertising perceived insults addressed to them. One sign reads, ‘“Wow your English is great.” “Thanks, I was born in London.”’

Some of these scenarios are likely to have been made up for effect. One young woman holds a placard stating, ‘“I’m really happy I’m going out with you and you’re brown… it proves I’m not racist.” Ummm.’ Did her partner really say that? What the pictures on the I, Too, Am Oxford website offer is not so much outrage but the performance of outrage.

Yet, despite its incoherence, the publicity campaign against microaggressions has had remarkable success. Val Rust, a professor of education at UCLA, was humiliated and disciplined by his administrators for his alleged ‘racial microaggression’. His crime? Changing a student’s capitalisation of the word ‘indigenous’ to lowercase. Rust was found guilty by UCLA of disrespecting his student’s ideological point of view. Given this climate, it was unsurprising to hear from numerous academics that they now practise self-censorship for fear of being accused of uttering a microaggression.

Such accusations are no longer confined to university campuses. Recently an American television interviewer, Melissa Harris-Perry, scolded one of her guests for describing Paul Ryan, the recently elected speaker of the House of Representatives, as a ‘hard worker’. She claimed that calling Ryan a ‘hard worker’ demeaned slaves and working mothers ‘in the context of relative privilege’. Typically, those individuals accused of uttering a microaggression backtrack, and implicitly accept the moral authority of their accusers.

What’s significant about the concept of microaggression is that it targets not just words, but the imputed meaning behind words. The question ‘where are you from?’ is denounced not because the words are offensive in themselves, but because the words’ implication is offensive. Microaggressors are being denounced for what they allegedly think, not necessarily for what they say. This is an open invitation to police our thoughts.

In the end, what matters is not the significance of the words exchanged but whether the individual claims to be offended by them. Neither the content of the words nor the intention behind them is important. All that matters is whether the alleged victim feels that the words disrespected his or her identity. Here, the meaning and status of a statement is defined by the victim. To ignore or question someone’s claim that they have been offended is to indulge in the unforgivable crime of ‘victim-blaming’.

Underpinning the microaggression-hunters’ crusade is the conviction that the victim is always right. The American comedian Louis CK has clearly internalised this ‘watch your language’ etiquette. ‘When a person tells you that you hurt them’, he said recently, ‘you don’t get to decide that you didn’t’. The arrogant intolerance of Louis CK’s position is striking. He is saying that individuals do not get to decide the meaning of their words or actions.

So what are microaggressions?

The term microaggression was defined by Derald Wing Sue, professor of counseling psychology at Columbia University, as ‘the brief and commonplace daily verbal, behavioural and environmental indignities, whether intentional or unintentional, that communicate hostile, derogatory, or negative racial, gender, and sexual orientation, and religious slights and insults to the target person or group’. What’s important about Sue’s definition is that these indignities need not be the outcome of intentional behaviour. He argues that ‘perpetrators of microaggressions are often unaware’ of the indignities that they inflict on others.

According to Sue, ‘microaggressions are often unconsciously delivered in the form of subtle snubs or dismissive looks, gestures, and tones’. But how does one prove an act of microaggression? After all, if these are sentiments buried deep in the psyche of the microaggressor, how can their existence be verified? As far Sue and his collaborators are concerned, there is no need for a complex psychoanalysis of the perpetrator. Why? Because, according to Sue, ‘nearly all interracial encounters are prone to the manifestation of racial microaggression’. In other words, there is little to prove. The same holds for encounters involving women, gay, lesbian, bisexual and transgender individuals, and disability groups. In every case, microaggressions are all but inevitable.

In all these cases, the presumption of guilt precedes the words or gestures of the unconscious aggressor. This is a secular theory of original sin from which no white, heterosexual man can possibly escape. According to Sue, even ‘well-intentioned whites’ suffer from ‘unconscious racial biases’.

The crusade against microaggressions plays a central role in the elaboration of Western identity politics. The performance of outrage featured on microaggression websites, complete with numerous photos of placard-holding individuals, transforms the ‘micro’, banal insults and misunderstandings of everyday life into examples of major social injustice. The sign-holders’ outrage is inversely proportional to the scale of the slight suffered. Hence a poorly phrased compliment can incite the angriest of reactions, followed by a complaint to the relevant authorities.

The concept of microaggressions resonates with a wider mood of distrust among and between adults. Over recent decades, society has increasingly felt uncomfortable with leaving people to manage their own personal interactions. As a result, rules and codes of conduct covering bullying, harassment and conflict have proliferated, and interpersonal tensions and misunderstandings are now often managed by professionals.

Now, a whole new dimension – unconscious behaviour and its unintended consequences – has been brought to the attention of rulemakers and lawyers. Human communication has always been a complicated business. The reading of body language and the interpretation of words and gestures have always involved misunderstandings. In an enlightened environment, it has been recognised that it is difficult, if not impossible, to hold people responsible for the unintended consequences of their actions and words. If people are held to account not for what they do or say, but for what they unconsciously think, then the idea of moral responsibility becomes incoherent. What is truly tragic about the myth of microaggressions is that it makes genuine dialogue impossible. The micro-policing of human relations is the inexorable consequence of the project of criminalising unconscious thought and behaviour.

One of the achievements of modern, open societies is that people are free to make choices about how they express themselves, the language they use and the attitudes they exhibit in public. Unlike in pre-modern communities, people do not have to watch their language or conform to the prescribed language of traditional culture. But anti-microaggression crusaders want to turn back the clock. They loathe tolerance and seek to impose a new regime of conformity on contemporary public life.

The policing of statements and words is deeply intolerant. The statement ‘watch your words’, which is so casually used in the crusade against microaggression, is a call to close down discussion. So ignore the likes of Louis CK – we all should be free to decide the meanings of our words.

Picture by: I, Too, Am Oxford.