Corbyn a Trotskyist? He isn’t fit to lay flowers at Trotsky’s tomb. 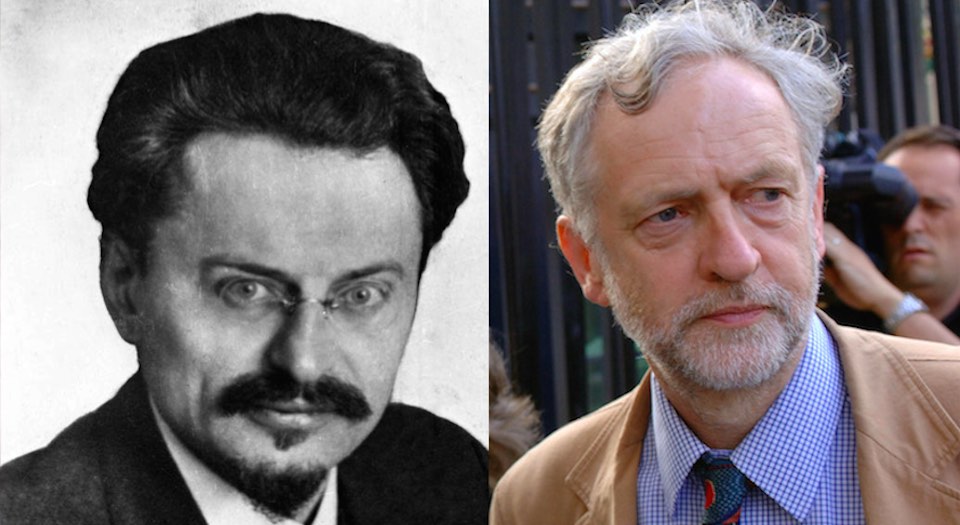 Of all the great Marxist thinkers, none has been defamed as thoroughly as Leon Trotsky, commander of the Red Army and then implacable enemy of Stalinism, who was exiled from the Soviet Union and finally murdered by Stalin’s agents in 1940. Because of his stance against Stalinism, his name got attached to the various radical, anti-Stalin left-wing parties that emerged in the West in the postwar period, many of which were less than impressive, and even a bit mad on occasion. So ‘Trotskyist’ has become an insult, used to mean extremist or splitter or nutter. Now, to heap further insult on this injurious undermining of Trotsky’s name, the T-word is being used in relation to the superbly unimpressive new leader of the UK Labour Party: Jeremy Corbyn.

Since the start of Corbyn’s unexpected rise, there have been whispers of a Trot takeover of Labour. It’s pure fantasy, of course, emanating from the right and disgruntled New Labourites. Unable, or perhaps unwilling, to face up to the true factor in Corbyn’s ascendancy — which is the historic hollowing-out of the Labour Party, leaving it ripe for cliquish takeovers, first by the Blairites and now by Corbynistas — the anti-Corbyn set instead imagines that Trots have stolen Labour from decent people and turned it into a radical-left outfit. Corbyn’s habit of singing ‘The Red Flag’ at the end of all his rallies — a cynical, hollow exercise in nostalgia — has got the Trot-worriers even hotter under the collar.

Everyone, calm down. For the first time in my life, I agree with Tom Watson, Corbyn’s deputy: ‘Corbyn is no Trotskyist.’ He certainly isn’t. He’s not fit to lay flowers at Trotsky’s tomb. Where Trotsky’s thinking was shot through with a stirring humanism, with a great faith in individuals’ ability to govern both our own lives and our natural surroundings, so-called Corbynism is downbeat, depressing, and doubtful, if not contemptuous, of mankind. Indeed, a brief comparison of Trotsky’s outlook with Corbyn’s does more than expose the hollowness of Corbyn’s alleged radicalism — it exposes the extent to which the entire left has lost the plot in recent decades.

In Their Morals and Ours, published in 1938, Trotsky summed up the radical project as one that would lead to ‘increasing the power of man over nature and to the abolition of the power of man over man’. This is the core belief of spiked, too: that we should fight for greater human dominion over the natural world, in order that we might tame its furies and exploit its resources to create more things and comfort for human beings; and that we should also oppose man’s power over man (and woman) and its thwarting of our moral autonomy and capacity for self-government. We want greater human control over nature, and less human control over other humans’ lives. You can call us Trotskyists for believing that, if you like: it won’t be accurate, but we don’t consider the T-word an insult.

Now let’s look at Corbyn. What is his view of humanity? What does he believe in? In a nutshell, the opposite to what Trotsky argued for. Corbyn, through his effusive embrace of the politics of environmentalism, actively campaigns to decrease the power of man over nature. And through his uncritical support of the new ‘politics of behaviour’ and the expansion of welfarism into more areas of our lives, he signals his support for an increase in man’s power over man, in a new, more insidious way — not via the boot stamping on a human face forever, but through the micromanagement of individuals’ habits and the promotion of the state as the only guarantor of stability in working-class people’s lives.

Far from wanting to increase the power of man over nature, Corbyn sees human control of nature as virtually a crime, something that has wreaked environmental and emotional havoc. Indeed, he calls for a new ‘attitude of mind towards the natural world’ — and it is the polar opposite of the ‘attitude of mind’ adopted by Trotsky. Corbyn says human behaviour has plunged the planet into ‘peril’, giving rise to a situation where the ‘environment is at risk, pollution levels are unbelievable [and] there are millions around the world whose livelihood is being destroyed through desertification, deforestation, floods and many other things’. In short, we’re dangerous, destructive creatures. We need a new ‘attitude towards the environment’, endorsed by government, says Corbyn. To this end, he opposes fracking and nuclear power, both of which he views as intolerant human interferences with nature.

Contrast this with Trotsky’s view. He passionately believed in ‘interfering’ with nature. In 1923, he wrote beautifully about a future world in which man’s dominion over nature would be so complete that we would actually design nature, God-like: ‘The present distribution of mountains and rivers, of fields, of meadows, of steppes, of forests, and of seashores, cannot be considered final. Man has already made changes in the map of nature that are not few nor insignificant. But they are mere pupils’ practice in comparison with what is coming. Faith merely promises to move mountains; but technology, which takes nothing “on faith”, is actually able to cut down mountains and move them.’ Corbyn won’t even allow a bit of drilling for shale gas — Trotsky wanted to move mountains.

Man’s interference with nature should be done for both ‘industrial purposes’, said Trotsky, in order to create more things, ‘railways and mines’, that contribute to human wealth and growth, and also for aesthetic reasons. He dreamt of rearranging nature ‘according to a general industrial and artistic plan’. He called on mankind to ‘earnestly and repeatedly make improvements in nature’, so that man ‘will have rebuilt the earth, if not in his own image, [then] at least according to his own taste’. And then the killer line — ‘We have not the slightest fear that this taste will be bad’.

What a stirring belief in humankind. Corbyn, by contrast, calls on us to ‘look to the damage we’re doing to biodiversity and ecosystems everywhere’. It’s a grave insult to Trotsky for his name to be uttered in the same sentence, even in the same universe, as such a downbeat, mankind-restraining politician as Corbyn.

As to the second part of Trotsky’s summary of the radical project — abolishing the power of man over man — Corbyn again does the opposite. For all the claims that Corbyn represents a massive break with the Blairite era, in fact he’s ploughing ahead with one of the worst innovations of the New Labour government: the politics of behaviour, a top-down attempt to ‘reinforce what is good and acceptable behaviour’, in Frank Field’s words. Corbyn was one of the first MPs to call for a ban on smoking. He has agitated for ‘education and regulation’, including censorship, to restrict the attraction of so-called junk food to the moronic masses. He wants government controls on how much carbon we can emit. And his reluctance to contemplate trimming the vast, Byzantine welfare state, which now provides the less well-off not only with financial sustenance but also with therapeutic, emotional and parenting interventions, suggests he has next to no trust in the ability of ordinary people to run their lives.

And Trotsky? He dreamt of a future of what he called ‘self-government’. Freed from the shackles of other men’s power, there was no telling ‘the extent of self-government which the man of the future may reach’, he said. Man will be able to ‘master his own feelings… extend the wires of his will into hidden recesses’. ‘The average human type will rise to the heights of an Aristotle, a Goethe, or a Marx’, he said. ‘And above this ridge new peaks will rise.’

If such uber humanism sounds strange to us now, less than 100 years after it was written, that’s probably because we live in an era in which humans are more likely to be viewed as hapless victims in need of help or as destructive creatures who must be controlled. Indeed, one of Corbyn’s media supporters describes the Corbyn vision as one which ‘put[s] an arm around the vulnerable’. ‘The vulnerable’ — what a dehumanising phrase. It speaks to the modern left’s contemptuous view of everyday people as passive and helpless. Trotsky thought us capable of unimagined levels of self-government; Corbynistas think we need the state’s caring arm across our sad, sunken shoulders.

The Corbyn view is summed up in that parliamentary motion he signed in 2004, which described humanity as ‘the most obscene, perverted, cruel, uncivilised and lethal species’. Trotsky would have bristled at such ugly misanthropy. The utter disconnect between the humanism of Trotsky’s demand for more control over nature and less control over people and Corbyn’s view of humanity as destructive and/or vulnerable creatures requiring state control or state pity, speaks to a broader shift on the left. Once devoted to the further conquering of nature and expansion of human autonomy, now the left sacralises nature and strangles liberty, viewing the state as the only real agent of change. It has completely jettisoned its founding principles. And then when spiked makes the Trotskyist argument for more control of nature and less control of people, leftists call us right-wing. Go figure.