A crisis of Europe dressed up as a drama about migration

The migrant debate has exposed EU contempt for the public. 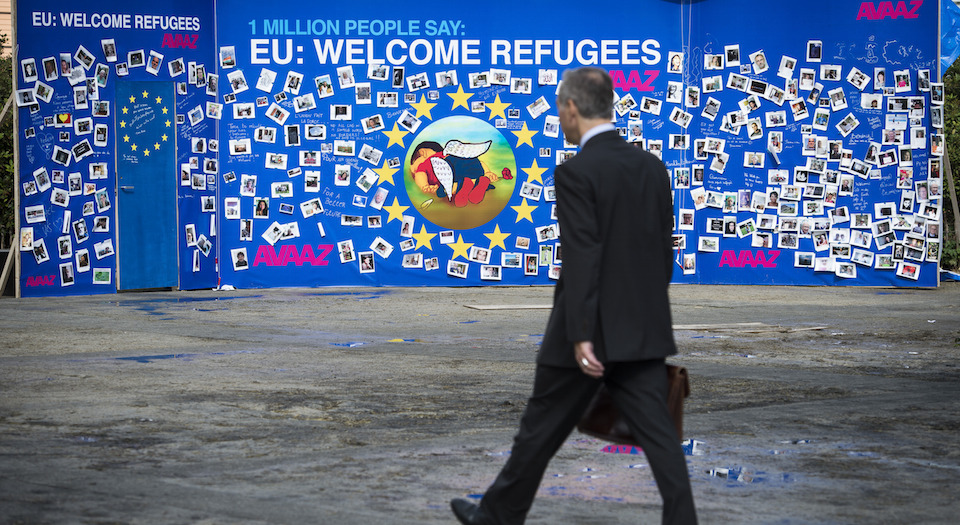 Since the Second World War, immigration in Europe has been discussed in a language that evades and obscures the real issues at stake. As someone who is in favour of the free movement of people, I’m disturbed by the way in which pro-immigration views are put forward in convoluted and narrow economic terms. This stress on the economic benefits of migration is about avoiding taking a principled stand. It also misleadingly sidesteps the cultural and social anxieties that sections of the public feel about the loss of their way of life, and the role they think immigration plays in this.

Similarly — with the exception of the positions put forward by the far right — anti-immigrant sentiments have tended to be couched in defensive and mystifying language. This side also uses narrow economic terms: immigrants are a drain on resources; there is a lack of housing and educational facilities and that means we can’t deal with more people, and so on. Yet many of these observers who object to immigration are actually far more concerned about the cultural impact of immigration rather than its economic consequences.

In recent decades, matters have been made worse by a new institutionalised dishonesty. Official estimates of the numbers of immigrants have become unreliable, to the point where they bear little relationship to reality. Almost imperceptibly, the distinction between refugees and migrants has been eroded. Over the past year in particular, governments in Europe have continually avoided making a distinction between a refugee crisis and a new phase of global migration.

On one level, today’s confusion around the issue of global migration is a product of successive European governments’ failure to understand or take seriously the values of national sovereignty and democratic accountability. This is why, time and again, ministers and officials have been forced to acknowledge that their immigration policies and system of controls are ‘not fit for purpose’. Governments have constantly fiddled with the rules in an attempt to avoid an open debate or public conversation about what is at stake. The question of mass migration is not simply about numbers, nor is it about the economic pros and cons of immigration. It is about having an honest discussion about the impact of mass immigration on the way that people live their lives.

There are good arguments for welcoming the transformative impact that immigration can have on a community’s cultural and social life. There are also coherent arguments for opposing mass migration on the basis that it might undermine existing patterns of social experience. That these arguments are rarely had out in Europe in the 21st century is not surprising. Excluding the public from such a debate is the de facto policy of Western European governments. In 2010, UK government documents released under a Freedom of Information request showed that officials understood and welcomed the cultural and social impact of migration. One document, written in 2000, indicated that the New Labour government was enthusiastically committed to promoting the ‘social benefits’ of increased immigration.

The promotion of social change through immigration is, in principle, a legitimate policy. But what is highly objectionable is the secretive manner in which this policy was discussed. According to one former New Labour adviser, there was ‘an unusual air’ of ‘secrecy’ in government deliberations on immigration. There was reportedly ‘paranoia’ about the content of this deliberation reaching the media, and the public, and provoking angst among Labour’s ‘core white working-class’ voters. Such political bad faith on the issue of immigration has, if anything, grown since 2010.

Current and future mass migration will transform Europe into a very different continent. And discussing and debating the impact immigration will have is essential if we are to minimise its potential disruptive and destabilising consequences. This requires honesty and political imagination. This conversation also demands the involvement of the European public, whose community life will, after all, be altered by these huge events.

Rules do not apply

I don’t have a problem with breaking rules. And I have every sympathy with migrant families who avoid border controls and break rules in order to find a new home and start a new life.

But when governments start treating their own rules in a casual manner, then the fundamental principles of the rule of law are undermined. In recent weeks, the leaders of the EU demonstrated that they regard their own rules as mere administrative inconveniences that can be broken at will. I did not much like the Dublin agreement on migrants — but it was an agreement with clear rules. That is until the president of the European Commission, Jean Claude Juncker, called for a ‘united European migration policy’ that in effect consigned those rules to history. In the same spirit of making up rules as you go along, German chancellor Angela Merkel declared Germany’s border open to migrants — only to reinstate immigration controls a few days later.

Merkel’s volte face symbolises the indecisive, even cowardly attitude of officialdom towards managing the current wave of global migration. But there is a more fundamental issue at stake, too: that of national sovereignty and democratic accountability. The technocratic violation of national sovereignty take its most extreme form in the Juncker revolution. His aim is to impose migrant quotas on EU member states. The consequence of the Juncker revolution would be to dispossess the EU’s nation states of the authority to control or regulate the flow of migrants across their borders. This call to weaken the sovereign power of a nation, made by an unelected functionary in Brussels, represents the very negation of national sovereignty and democratic accountability.

One of the most dramatic consequences of the EU’s indifference to its own rules is that it has authorised rule-breaking by migrants themselves. In such circumstances, migrants feel empowered to refuse to cooperate with border guards, police and officials. They are freed from observing the very laws that apply to the citizens of the country that they are entering. No papers are needed, no registration is necessary. Instead, many of them believe they possess certain natural rights, including the right to be transported to the country of their choice. Migrants to Denmark instruct officials to take them to Sweden. Those in Hungary shout ‘Germany!’. Any attempt to enforce a community’s rules within nation states is denounced as a barbaric imposition. Western Europe’s implicit encouragement of rule-breaking as a way of getting on in life is not a promising way to socialise future citizens into the values of the democratic way.

Those pushing the ‘forget the rules’ approach don’t realise that socialising migrants into the habit of rule-breaking will have destabilising consequences for the communities they move to. The exclusion of the rule of law from the sphere of migration will have a deleterious influence on the management of conflict in other areas of life.

Who is more moral?

Virtually anyone of any influence in Europe is calling for ‘more compassion’ and ‘more generosity’ towards the refugees. Those who dare to raise doubts about this supposed humanitarian approach risk being denounced as ignorant fools who have not learned the lessons of the Nazi experience. Even those who are sceptical of the ‘open the borders’ thesis accept their opponents’ general outlook. They think there is something morally dubious about their own reaction. They often argue, opportunistically, that we must impose controls on migration in order to ensure that far-right xenophobic politicians don’t benefit from public angst.

In this climate of moral posturing, it’s important to take a reality check. Yes, Europe has its share of narrow-minded xenophobic political movements, which exploit the unease that many EU citizens feel towards the flow of strangers into their communities. However, their behaviour is no worse than that of the ‘let them all in or else’ crowd. These seemingly polar opposites in the migration debate are actually captive to a very similar illiberal impulse: one side expresses prejudice towards migrants; the other expresses contempt for citizens of EU nations.

Although the ‘open the door’ lobby uses the language of morality, it lacks the courage of its convictions. One reason why the current media campaign against the Hungarian government has become so virulent is because many observers fear that Hungary’s approach might resonate with sections of the European public. The branding of any alternative to the Juncker plan as xenophobic is an attempt to construct a moral quarantine around the discussion of migration. This top-down approach is driven by a conviction that the views of ordinary European citizens are not worthy of note. The ‘pro-migrant’ lobby’s contempt for the people of Europe, and for the exercise of democratic accountability, shows that its grand-sounding moral claims are really the cynical postures of illiberal functionaries.

The drama surrounding the new wave of migrants obscures a disturbing development: the physical and moral distancing of EU institutions and policymakers from their own publics. Unable to conduct an honest discussion with their citizens, these institutions feel more comfortable taking selfies with grateful, smiling migrants. European citizens must insist that they be consulted on this issue, which is so important to their futures.