A black hero for guilty whites

Ta-Nehisi Coates’ Between the World and Me offers a disturbing insight into the new racialism. 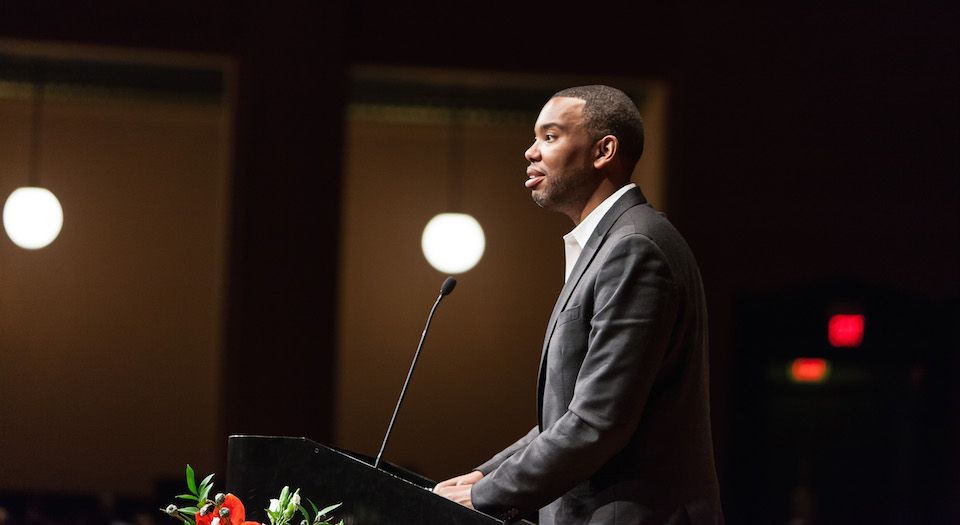 In his new book, Between the World and Me, journalist Ta-Nehisi Coates shares his thoughts and experiences about being black in America today. To say Coates has been highly praised is an understatement. Reading his work is ‘essential , like water or air’, according to one New York Times journalist. Hardly a well-known name a year or two ago, Coates now wins the title of America’s ‘foremost public intellectual’, says the Washington Post, and ‘it isn’t close’.

Not content with expressing over-the-top acclaim, Coates’ fans have also sought to crush any hint of criticism. In his New York Times op-ed, David Brooks prefaced his remarks by saying ‘every conscientious American should read [Coates’] “great” book, but that was not enough to protect Brooks from the storm that followed when he questioned Coates’ dismissal of the American Dream. One letter-writer to the NYT said a proper response from Brooks would have been, ‘This man has spoken his truth profoundly and I need to respect it by just listening closely and keeping my mind open and my mouth shut for a while’.

With the killings of black people in Ferguson, Baltimore, Charleston and elsewhere dominating public discussion in the US over the past year, Coates’ book is certainly of the moment. But, even so, its rapturous reception is somewhat surprising. Here we have a book that is damning white Americans, portraying them as irredeemably racist, and yet the strongest and loudest praise is coming from white liberals.

Between the World and Me takes the form of a letter from Coates to his 15-year-old son. In a stream-of-consciousness style, punctuated by angry outbursts, the author relays his experiences, from his youth on the streets of West Baltimore to his adult life in New York City. Coates writes about growing up in fear – of both the black crews in his ghetto and of the police – and says that this fear continues. He contends that the oppression black people face is experienced physically; he tells his son: ‘You must always remember that the sociology, the history, the economics, the graphs, the charts, the regressions all land, with great violence, on the body.’

While ostensibly telling his life story, the main purpose of the book is to be a vehicle to inculcate his son (and readers) in his worldview. And, in that worldview, America was born with an original sin – slavery – which cannot be overcome. Coates doesn’t accept the common narrative of racial progress in America: from slavery to Civil War emancipation, from Jim Crow to the civil rights movement, culminating in the election of the first black president. Instead, black suffering simply takes different forms over centuries, and never ends:

‘The plunder of black life was drilled into this country in its infancy and reinforced across its history, so that plunder has become an heirloom, an intelligence, a sentience, a default setting to which, likely to the end of our days, we must inevitably return.’

Coates does not explain these forces or why they persist; in fact, his book is notably light on evidence and arguments. He simply asserts that America’s reason for existence, and its ongoing drive, is to kill black people: ‘In America, it is traditional to destroy the black body – it is heritage.’ There is a mystical quality to his view: it is as if there is an unstoppable force through history, and individuals are doomed to act out the part assigned to them. Neither whites nor blacks are full moral agents.

Take Coates’ discussion of a police shooting of a university classmate named Prince Jones in 2000. Jones was stopped and shot 16 times by a black police officer from a black middle-class enclave, Prince George’s County, in Maryland. Coates’ anger and sadness about this killing are very understandable. But he does not explore the specifics of the case in detail, nor the fact that the policeman was black (which, at the very least, complicates matters). Instead, he says America is to blame: ‘[Jones] was not killed by a single officer as much as he was murdered by his country’; ‘[Jones’] killer was the direct expression of all his country’s beliefs.’

Coates’ world is morally simplistic and Manichaean: blacks are good and whites are bad, and they are at odds with one another. He contrasts the black ghetto to his notion of the white ‘Dream’, a suburban paradise ‘organised around pot roasts, blueberry pies, fireworks, ice-cream sundaes, immaculate bathrooms and small toy trucks that were loosed in wooded backyards with streams and glens’. But Coates is so taken by his sweeping generalisation about American history that he misses the complexities on the ground. Despite the problems in inner cities, many black people manage to carve out good careers and vibrant lives. And many blacks are successfully pursuing the American Dream of advancement in suburbs (as evidenced by the recent migration of many African-Americans to the states in the South). Conversely, there are many poor whites who wouldn’t recognise Coates’ clichéd version of suburbia as bearing any relation to their lives.

One of the more disturbing aspects of Coates’ perspective is how he, rather than seeking to overcome racial categories, effectively reinforces them. Whites are inauthentic; they ‘think they are beyond the design flaws of humanity’. He walks the streets and sees ‘white people spilled out of wine bars with sloshing glasses’. In contrast, black people are authentic; suffering as victims, but beautiful. He writes: ‘The physical beauty of the black body was all our beauty, historical and cultural, incarnate.’ Coates’ constant reference to black bodies recalls the way that racist whites in the past reduced blacks to their physical features.

Coates’ prism of race ultimately leads him to dehumanise people. On 9/11, he could ‘see no difference’ between the officer that shot his classmate Prince Jones, and the police and firefighters who lost their lives trying to save others. ‘They were not human to me’, he writes.

His mindset also results in him interpreting everyday events in racial terms – as what people today call ‘microaggressions’. In a revealing story, Coates tells of how, at a cinema in New York’s Upper West Side (read: upper-class and liberal), a white woman pushed aside his toddler son who was blocking her way on the bottom of the down escalator, saying ‘come on!’. Coates sees this as a racist act – the woman was ‘pulling rank’ and had ‘invoked [her] right over the body of my son’ – and yells at her. Maybe she was out of line, or maybe she was just a typically assertive New Yorker.

He then spends pages having an imaginary argument with the woman, who he imagines would deny being a racist (because whites are ‘obsessed with personal exoneration’). He goes on to liken her to anonymous lynchers in the South (I kid you not). As Rod Dreher writes, for Coates, ‘the penny-ante rudeness of an old woman in the lobby of a Manhattan movie theatre is the showdown at the Edmund Pettus Bridge. He connects the grumpy woman’s action to Jim Crow and slavery.’ And, in doing so, Coates actually minimises the severe injustices of the past.

The fawning, white-liberal praise of Coates is awkward. He is supposed to be, as Michelle Alexander put it in her review, someone who ‘speaks unpopular, unconventional and sometimes even radical truths’, and yet Coates’ acclaim shows that his views are in fact popular and fairly conventional. Coates denounces white supremacy, says he has ‘low expectations’ of white people, and yet he owes much of his success to whites who lap up his every word. One can’t help but be reminded of Tom Wolfe’s 1970 essay ‘Radical Chic’ about Leonard Bernstein and other rich celebrities throwing a fundraising party for the Black Panthers. Once again, white liberals are seeking to expunge their guilt.

At the same time, there are a number of ways in which Coates is more a product of today’s prejudices than a throwback to the days of Lenny and the Panthers. One thing that clearly unites Coates and his liberal admirers is a disdain for the masses – the ‘Dreamers’. Behind the recent police killings, Coates sees the whites who elect racist politicians. ‘The abuses that have followed from these policies – the sprawling carceral state, the random detention of black people, the torture of suspects – are the product of democratic will’, he writes. ‘The problem with the police is not that they are fascist pigs, but that our country is ruled by majoritarian pigs.’ Yes, that’s right, he’s calling the white masses ‘pigs’. You can easily imagine the liberal elite nodding along to this, as it often complains about the majority, too – for not going along with their ideas about gun control, the doomsday scenarios of the climate-change catastrophists, or some other cause.

You can also see agreement between Coates and the liberal elite when it comes to hatred of the people who live in suburbs. Indeed, as Coates concludes in the final pages of his book, he launches into a bizarre green tirade about the ‘seductiveness of cheap gasoline’ to ‘Dreamers’. Apparently, technology is to blame for both racism and environmental destruction: ‘Dreamers have improved themselves, and the damming of the seas for voltage, the extraction of coal, the transmuting of oil into food, have enabled an expansion in plunder with no known precedent. And this revolution has freed the Dreamers to plunder not just the bodies of humans but the body of the Earth itself.’ It is telling that Coates condemns economic growth, given that it is something that could potentially transform poor neighbourhoods and lessen racial tensions over scarce resources.

Today we have a perverse situation in which white liberals seek to be fed horror stories about themselves by black authors. Just as some blacks believe their identities have been determined by what was done to them hundreds of years ago, there are some whites who believe they must pay for the crimes of their relatives. Across the US, in classes and seminars, whites are expected to confess their ‘white privilege’, and admit they will never lose it. This therapeutic intervention might ease some liberal guilt, but it won’t do anything for black people.

The novelist Toni Morrison says Coates’ book is ‘required reading’, and others say the same. No, you don’t have to read it. But if you do, you’ll gain insights into how Coates and others are doing their best to make racial thinking appear fashionable once again.

Between the World and Me, by Ta-Nehisi Coates, is published by Random House. (Order this book from Amazon(UK).)