Tianjin was a tragedy, not comeuppance

Too many in the West are seeing a disaster as a moral lesson. 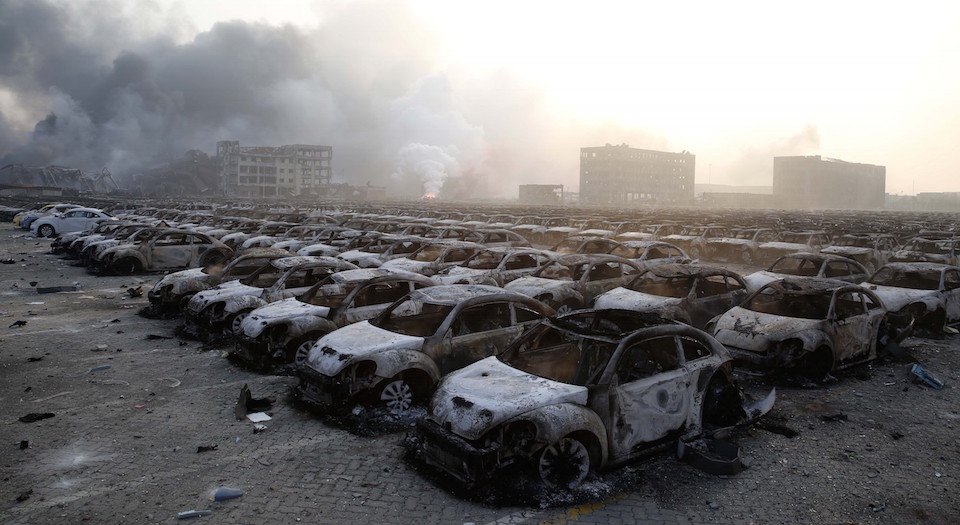 ‘Disasters on the scale of (this) tragic explosion… tend to provoke a brief wave of statements that such things must never happen again. With the passage of time these sentiments are diluted into bland reports about human error and everything being well under control… [But] there is a real chance that the death toll could trigger meaningful changes in a neglected aspect of industrial safety.’

Such was the New Scientist’s view of the Flixborough disaster in 1974, when flammable hydrocarbons ignited at a chemical plant near Scunthorpe in the east of England, killing 28 people and seriously injuring 36. On that day, nearly all of the industrial workers on site were killed or maimed.

Forty years later and, at the time of writing, the death toll from the explosion that ripped through the north-eastern Chinese port of Tianjin has risen to 114. Much is unknown about the actual causes, but it is undoubtedly an accident. With many Chinese families affected – either by loss of life, destroyed property, or broken glass – there is an understandable clamour for information, clarity, honesty and, at points, retribution.

It was a coincidence that one year on from the Flixborough disaster, the UK government implemented the Health and Safety at Work Act 1974, which is still in force today, ‘ensuring safe means of handling, use, storage and transport of articles and substances’. In China, within four days of the Tianjin disaster, Chinese premier Li Keqiang had ordered a nationwide overhaul of work safety, focusing on dangerous chemicals and inflammable materials. Whether this is a smokescreen or a genuine response to the problem remains to be seen, but Tianjin is definitely a wake-up call to government, officials and businesses – after all, a modern economy requires modern standards of behaviour, regulation and transparency.

Tragedies are always newsworthy, but there is something unhealthy in the way that Western media appear to be picking through the charred remains of cars and homes, visiting the shocked and injured and speculating on the potential, hidden sulphurous dangers still lurking in the air. It might be fair game for a news journalist but, reading between the lines, there seems to be a moral rebuke to China underlying the empathy. ‘You have developed too fast, and too irresponsibly’, runs the rebuke.

The Tianjin Binhai New Area development zone is approximately 90 kilometres away from the city of Tianjin. Tianjin is home to 7.5million people (although Chinese cities are not cities in the way we know them in the West; they are administrative zones rather than urbanised agglomerations, and can often include huge areas of agricultural land). It is an important city within a zone of rapid industrial growth, as well as the home of China’s sole significant prototype eco-town, the Sino-Singapore Tianjin Eco-city.

The Bohai Economic Rim, which refers to the vast economic hinterland surrounding Beijing and Tianjin, contains heavy industry, as well as growing manufacturing, automobile, electronics and petroleum sectors, and shipping and aviation. This economic zone is home to three per cent of the world’s population, and creates 25 per cent of China’s total GDP, and 25 per cent of its total financial resources. The import and export volume of Tianjin Port is $85 billion and $80 billion respectively.

It is a well-worn cliche that China is compressing 40 years of history into 10 years, so perhaps it is hardly surprising that a scaled-up version of industrial disasters from 40 years ago in the West should occasionally occur in contemporary China. This is not to treat the Tianjin tragedy flippantly. Nor is it to say that China shouldn’t have learned from historical mistakes elsewhere – and hopefully now the authorities will. But the scale of the disaster does reflect a scale of operations unimaginable in the West.

The scale of the disaster

Just as reporters at the scene of the Tianjin disaster were shocked to discover what the aftermath of a huge explosion looks like, so the sheer scale of China’s industry and development sometimes overwhelms Westerners. But this scale also means that there is a greater likelihood of something tragic happening. Admittedly, even when population size is taken into account, China’s workplace fatalities are still 20 times higher than in the UK (nine per 100,000 workers are killed each year compared to 0.45 per 100,000 in the UK). But this is statistical game-playing. In the construction industry, for example, Britain’s housebuilding rate was recently the lowest it’s been since the Second World War. Compare this to China’s huge housing expansion. Moreover, British construction, such as it is, mainly consists of bog-standard, brick-block, low-level safe structures – not the record-breaking, challenging, innovative constructions that China is racing to erect. No wonder there are more people injured and hurt in China’s construction industry than in Britain’s – far more people are involved in far more ambitious construction schemes.

Also, China is still a developing country. It is in the process of turning migrant labourers into skilled contractors. The training required to construct the future is substandard, with a dearth of creative management and supervisory authority, let alone detailed knowledge at the level of construction operations. (For a comparison, think of Ronan Point, the newly constructed block of flats in London that partially collapsed in 1968.) Similarly, regulatory standards of material production, safeguards and protection are very low, often due to poor official guidance – sometimes regulations are two-to-three decades behind the West. And even if regulations were up to speed, too many developers have no time or inclination to implement costly and time-consuming protective measures. The Tianjin disaster will now concentrate minds at many levels.

However, it does need to be said that corruption – or, rather, self-advancement and opaqueness – is a social necessity in China. It pays to be secretive for all kinds of contemporary and historical reasons, and this mindset clearly leads to defensiveness and evasion. There is no social dynamism for workers in China to show initiative – or to remedy problems – when they are simply paid to do the job.

Still, solutions to the problems raised by the Tianjin disaster will be found in the coming months. And technical solutions like factory-applied steel protection, better transit routes, educated project-management officials, meaningful regulatory standards, trained construction workers, blast protection, intelligent monitoring systems, and so on, will help matters. However, even in an open society, such improvements take time; in China it will be more difficult to cut through the veil of secrecy.

It is reported that the families affected are growing frustrated at the lack of information being issued by the authorities, and protests are brewing. Their frustration may well boil over as news about the dead and injured emerges; some of the dead may never be recovered. But the families’ anger, and the possibility of protests, shouldn’t be a surprise. According to China Labour Bulletin, which tracks disputes in China, there are around 200 separate local protests every month in China. This is news only to Western news reporters – they just assume Chinese people are completely under the thumb of the state.

In actual fact, protest and complaint in China are in rude health. The Chinese are not automatons and are understandably angry about what has happened in Tianjin and the authorities’ subsequent response. However, it also ought to be noted that demands for compensation are a common feature of protests in China. Roughly 120,000 ‘mass incidents’ occur every year as a result of grievances over forced land acquisitions. In most cases, the currency for settling grievances is money. Parallel demands for greater legal openness – with some families insisting that the authorities tell the truth and punish the culpable – are gleefully reported in the West as a sign of Chinese people’s discontent with their government. But this kind of demand usually merely reinforces the authority of the state, allowing it to impose order on errant functionaries. Ironically, protests can pave the way for a stronger state.

Roving journalists and social-media drones have pointed to the collateral damage caused by the Tianjin explosion as if to imply Chinese officialdom’s callous disregard for ordinary people. ‘What kind of government would allow residential districts to be constructed so near a chemical plant?’, they say. But, beyond the fact that money-grubbing developers are as much to blame as local officials, it is important to note how few residents were hurt in Tianjin, and how little significant structural damage was done to homes in the immediate and surrounding area.

Risk is not the same as actual harm. In 2008, a report examined the risks to local residents living alongside chemical plants in America. It found that America’s top 100 most dangerous facilities posed safety risks to about 80million citizens. Clearly, if Americans built with disaster in mind, if they built with a hyper-awareness of risk, then the US would have very few industries within cities, and lots of survivalist homes in the desert.

In James Palmer’s book Heaven Cracks, Earth Shakes, the Chinese made great play of the cosmic significance of the 1976 Tangshan earthquake, which occurred as Chairman Mao lay dying. For many, this natural disaster, which lasted 23 seconds and killed 300,000 people, was deeply symbolic: ‘The heavens crack and the earth shakes.’ Nearly 40 years later, and many are already beginning to talk of the conjunction between the Tianjin explosion and China’s place in the world. Indeed, the Western media seem to revel in the idea that a too-rapidly developing China has suffered its comeuppance. Admittedly many intelligent Chinese people enjoy a pseudo-Daoist ‘interconnectedness of all things’ fatalism. Now it seems Western commentators are starting to indulge in it, too.

The Tianjin is a tragic accident, and it will undoubtedly lead to improved industrial and manufacturing safeguards and more rigorous regulatory standards. There will also be cover-ups and disappointment. The conspiracy theorists will have their paranoia reinforced and the Schadenfreuders may even relish a few figureheads being punished to excess. But we should remember that this is primarily a terrible human tragedy and hope that – just like Three-Mile Island, Seveso, Aberfan and other disasters – valuable lessons are learned so that something like Tianjin never happens again in China’s necessary rush to catch up with the standards of Western industrialisation.