They don’t give a flying fox about hunting

The pro-fox crusade is a mask for those hunting down human liberties. 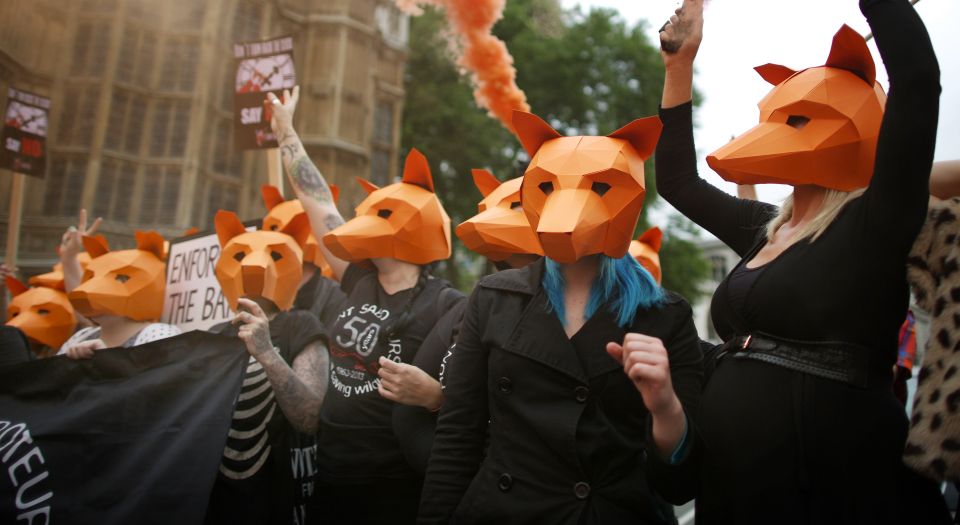 Just back from Greece, where a nation is locked in torturous debates over the future of its economy and entire way of life, in or out of the Euro and EU. Meanwhile at home, I find the UK political class tearing itself apart over the momentous issue of… the preferred way to cull vermin in the English countryside.

How have the UK parliament and media apparently managed to become transfixed again by an argument over such a trivial issue as hunting foxes with dogs? It does not require the mythical cunning of the anthropomorphic fox to work out that this furious row, which led Tory prime minister David Cameron to postpone proposed changes to the ban on hunting, cannot really be about alternative methods of pest control.

It is worth reminding ourselves to start that, with the exception of a few full-time eco-fools, nobody with a brain actually thinks that the fox population should be allowed to run free and multiply across Britain’s farmland. Despite their good looks, foxes are vermin and they must be controlled, just like those rather less photogenic rats and mice. The practical debate is only about whether they should be culled by hunters with guns – and probably dogs – or by hunters with horse and hound. Either way, the end result is the same – sudden death to the arguably handsome but indisputably verminous fox. The scientific jury remains out on whether any method is more humane than another.

(As an aside, we might also note that the rural hunt followers have more respect for the fox – Old Reynard – than most of those involved in the posturing at Westminster; the followers I interviewed a few years ago during the initial political battle over the ban were surprised by my contempt for the urban foxes some of us might like to hunt in London.)

So no, all of this fuss is not about the welfare of the fox. The drawn-out UK debate over hunting has always been about more important, human, issues. Just as those ‘Team Fox’ protesters outside parliament this week wore fox masks, so the rows over hunting have long been a mask behind which something else is going on.

At one level, the debate is about petty politicking and a scramble to find some moral highground in the mud of a hunting field. The ban on hunting with hounds was originally brought in under Tony Blair’s New Labour government in a pathetic attempt to prove the Labour Party’s radical, progressive credentials. Unwilling and seemingly unable to do anything substantial to change British capitalism, New Labour dressed up in a cloak of self-righteousness, rather as the huntsman dons his hi-vis pink coat, to ban hunting and appease its MPs and grassroots supporters by robbing the rich of their supposedly sadistic pleasures.

Now hunting has once again become caught up in pathetic parliamentary politicking. Conservative leader David Cameron made an election pledge to review the ban and allow a parliamentary vote in an obvious attempt to shore up his party’s rural support. This week the Scottish National Party made an equally obvious political gesture, vowing to vote against the Tory attempt to relax the ban and causing Cameron to postpone the parliamentary debate. SNP leader Nicola Sturgeon claimed, with a straight face, that her party had acted to represent the interests of the English people and not, you understand, simply to stick two fingers up to the English Tories. In response, Cameron and the Conservatives said this proved the need for them to pass another law ensuring that only English MPs could vote on English matters, even though this apparently would not exclude the SNP from voting on the hunting bill that the row was supposed to be about.

The upshot is that the UK is facing another round of its ongoing constitutional crisis, allegedly over the issue of foxhunting. It is a sure sign of how fragile the historic Union has become, and how incoherent and shallow political debate is today, that the future of the British state can be put to question by a difference of opinion over methods of pest control. The latest debacle of the foxhunting debate looks like a symptom of a sickly, mange-ridden political class that somebody surely ought to put out of its misery.

There is also a more profound human issue behind the hunting debate. The high-profile obsession with not just condemning but banning foxhunting is a reflection of the contempt for freedom in British public life today. The most important f-word – freedom, not fox – is almost entirely absent from the discussion. Yet why shouldn’t the freedom to pursue any lifestyle choice which does not harm other people apply to the hunting community as much as to any other minority group?

To listen to the way some politicians and activists talk about some possible changes to the ban on foxhunting, you might imagine that the Tory government had proposed to reintroduce slavery. (Indeed, some of them actually like to compare the two practices, which gives a good insight into what they really think of humanity.)

The shrill crusade to ensure no form of foxhunting with hounds is allowed is part of the broader war on people’s lifestyles and pastimes that don’t suit the standards of the metropolitan cultural elite. Whether it’s giving your kids fizzy drinks or hunting a fox on horseback, whether you’re poor and want a pack of cigarettes or posh and enjoy riding with packs of hounds, they don’t like it and therefore it must be taxed / banned / publicly demonised. From New Labour’s ‘politics of behaviour’ to the ‘nudge agenda’ of more recent governments, the emphasis in UK politics is increasingly on policing what people do, say and think – for our own good, of course. And now for the good of Britain’s ‘oppressed’ foxes.

There is little mention of the freedom to hunt foxes even on the nominally pro-hunting side of the political divide. Those proposing to ‘relax’ – not repeal – the ban tend to argue instead that the current legislation is an ineffective mess that is not working as intended and needs some tidying up. It is certainly a useless law – figures suggest that as many foxes have been killed since the ban as before it, while some 97 per cent of prosecutions under the hunting law have reportedly involved individual poachers rather than organised hunts. But then, practicalities never had much to do with this ban in the first place. It was intended as a statement, a political attack on the freedom to hunt. In response, however, the Tories balk at talking about such an unfashionable principle as freedom, preferring to focus on the technical details of the legilsation. Little wonder they are losing the moral highground.

Yet the issue of freedom ought to be to the forefront of the hunting debate. People should generally have the liberty to live and to enjoy themselves as they see fit, whether that means playing golf, cross-dressing or hunting foxes. As the great Victorian philosopher John Stuart Mill put it in his classic work On Liberty (1859), an individual should be sovereign over himself, and could not be compelled to do or say anything he did not wish to, even if it was judged to be in his own interests. The single exception to this rule, Mill allowed, was if he was harming somebody else: ‘The only purpose for which power can rightfully be exercised over any member of a civilised community, against his will, is to prevent harm to others’. Mill did not, we should surely insist, include in his ‘harm principle’ the prevention of harm to foxes and other pests, or the hurt feelings of the foxes’ self-appointed spokespersons in parliament or on Twitter.

That is why the principle of the freedom to hunt should be defended, regardless of what we or anybody else thinks of it in practice. Opponents like to cite opinion polls (yes, them again) which claim that up to 80 per cent of the British public want to see foxhunting with hounds remain illegal. But even if that were true, so what? This is not an election or a referendum about how the country should be run. It is a law banning the lifestyle choices and leisure pursuits of an impassioned minority.

On this, too, I am with Mill, who argued for the defence of unpopular individual liberties against both ‘the tyranny of the magistrate’ and ‘the tyranny of the prevailing opinion and feeling’, and insisted that if only one man dissented from society’s view, the majority would have no more right to impose its opinion on him than he would to make them all agree with what he did.

Despite all the ‘view-hallooing’ about it in Westminster and the media, foxhunting is not, of course, an important issue. But the obsession with outlawing it has become a symbol of much that is wrong with our political and public life today. The fact that the importance of human liberty has been lost sight of amid all the blah about foxes’ rights is a worrying sign of the times.

A footnote. Those on the alleged left who claim that banning foxhunting is an important radical humanist cause always bring to my mind the somewhat different attitude of a true Labour Party radical from an earlier age. The late Roy Jenkins was home secretary in the Labour government of the 1960s, who famously declared that what people called the ‘permissive society’ was better understood as ‘the civilised society’ and played a key role in the liberalising humanist legislation of that decade on issues such as abortion, homosexuality and divorce. (In the later Labour government of the 1970s, Jenkins would also introduce the draconian, repressive Prevention of Terrorism Acts, but that’s another debate.)

When I interviewed the then-Lord Jenkins in 1997, to mark the thirtieth anniversary of the 1967 Abortion Act, he made clear that he had wanted to help lift the ban on abortion not out of any feminist convictions, but because of a wider commitment to the liberal principle of freedom from state intervention. ‘I am on the whole very much against interfering with people’s liberty, unless you can show an overwhelming social cause’, he said. ‘This leaves me to be liberal on abortion law; it would also leave me never to vote for banning foxhunting, so I apply the rule indiscriminately.’

On everything from abortion rights to foxhunting, how we could do with a new generation of indiscriminate liberals in UK politics today.

Mick Hume is spiked’s editor-at-large. His book, Trigger Warning: Is the Fear of Being Offensive Killing Free Speech?, is published by Harper Collins. (Order this book from Amazon(UK).)