The document that built a ‘brazen wall’ to guard the individual from the state. 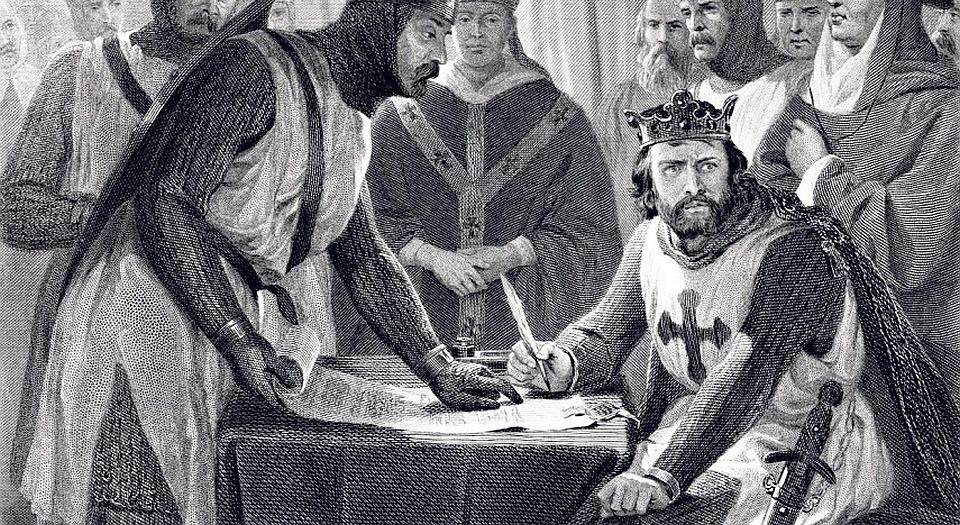 Not surprisingly, given it was written 800 years ago, there’s much in Magna Carta that sounds alien to our 21st-century ears. From its heartfelt plea for ‘standard measures’ of wine and ale ‘throughout the kingdom’ to its rumination on what should happen to a man’s fortunes should he die while in debt to Jews, the medievalism of the document sings through its 63 clauses. And of course, as many historians point out, it’s a very historically specific document, designed to prevent a brewing civil war between influential rebel barons and a tyrannical king, John. Some sniff that Magna Carta was simply a wartime treaty, merely securing rights for stroppy 13th-century barons rather than for man- (far less woman-) kind.

Yet for all its medieval quirkiness, Magna Carta has a universalist heart that still beats today. It articulates the human desire for freedom so powerfully that some of its clauses sound as relevant, and urgent, to our ears now as they must have done to the barons, abbots and royals who witnessed the king’s sealing of Magna Carta in a field near Windsor on 15 June 1215. Indeed, these clauses would provide the foundation stone of the revolutions and constitutions that shaped the modern, democratic era, not just in Britain but in the US, France, and elsewhere. Even as far afield as China, democracy-seeking dissidents cite this dusty document sealed by an English king 800 years ago.

Consider Clause 38: ‘In future no official shall place a man on trial upon his own unsupported statement, without producing credible witnesses to the truth of it.’ Here, we have one of the earliest, and clearest, articulations of the importance of the rule of law, of letting citizens be, unless it can be proven, credibly, that they have committed an offence. Magna Carta says the arbitrary power of officialdom must be restrained by law. Or consider Clause 39: ‘No free man shall be seized or imprisoned, or stripped of his rights or possessions, or outlawed or exiled, or deprived of his standing in any other way, nor will we proceed with force against him, or send others to do so, except by the lawful judgment of his equals or by the law of the land.’ Here, again, we have a proposal to shackle authority, to limit its ability to interfere with people’s rights or property. Clause 39, which still forms part of English law, is a clarion cry for the right of people (back then only barons, yes) to be ‘let alone’, as American revolutionaries would put it more than 500 years later.

The most important thing about Magna Carta is how it was interpreted, and acted upon, by future generations, particularly by the revolutionaries of the sixteenth, seventeenth and eighteenth centuries. If Magna Carta planted the seed of an ideal that would radically reshape human affairs — that sometimes the state must be restrained in order to allow the flourishing of individual life and liberty — it was Magna Carta’s fans in subsequent decades who watered that seed, demanding that this ideal be spread beyond barons to all men, and eventually all people.

So Edward Coke, the 17th-century radical English jurist whose writings on Magna Carta introduced it to a whole new audience and helped give rise to the Habeas Corpus Act of 1679, famously declared: [T]he house of every one is to him as his Castle and Fortress as well for his defence against injury and violence, as for his repose.’ Here, Magna Carta’s promise that no baron should be stripped of his rights or possessions was expanded to ‘every one’, whose ordinary home, said Coke, should be treated in the same way a baron’s castle was once treated: a place to be left alone. The liberal promise of Magna Carta was being spread. The idea of liberty, and privacy, was being expanded.

Also in the 17th century, the Levellers, the most radical movement of the English Civil War, frequently cited Magna Carta, explicitly arguing that its promise of liberty should be enjoyed by all. John Lilburne, the Leveller who fought hard for freedom of speech, described Magna Carta as ‘the Englishman’s legal birthright and inheritance’. Leveller sympathiser Henry Marten cut to the heart of Magna Carta when he described it as ‘brazen wall and impregnable bulwark’ between authority and man, which ‘defends the common liberty of England’. This captures what was so meaningful about Magna Carta to those groups who desired greater freedom: it proposed erecting a ‘brazen wall’ between those with power and those with none, between the authority of a few and the liberty of the many; it restrained the state, acting as an ‘impregnable bulwark’ against its power.

In the eighteenth century, American revolutionaries built their entire new nation on the promises of Magna Carta. In 1761, the Massachusetts-based American revolutionary James Otis gave a fiery speech against Britain’s use of ‘writs of assistance’ in America, which allowed it to access citizens’ homes and their personal records. Such arbitrary interference in people’s lives and effects went against the ideals of Magna Carta, he said. At the sealing of that document in 1215, said Otis, ‘American independence was then and there born’. The Fourth Amendment of the US Constitution, which articulates ‘The right of the people to be secure in their persons, houses, papers, and effects’, granted to all Magna Carta’s suggestion that people (barons) should not be ‘stripped of [their] rights or possessions’ without good reason.

Further afield, Magna Carta inspired the French revolutionaries of the late 1700s. The Declaration of the Rights of Man and Citizen of 1789 states that, ‘No man may be indicted, arrested, or detained except in cases determined by the law’, showing, as one historical account puts it, that Magna Carta’s influence ‘had expanded beyond the English-speaking world by the late 18th century’. Only in France, as in America, all men were to be treated as deserving of the protection of the ‘brazen wall’ of liberty — ‘reflecting how Magna Carta’s provisions had expanded to include everyone instead of only the landed nobility’ (1). In the modern era, Nelson Mandela appealed to Magna Carta when he was on trial in 1964, demanding that South Africa’s Apartheid regime recognise his, and all blacks’, right to be protected against the excessive power of the state. In Tiananmen Square in 1989, some of the pro-democracy dissidents cited Magna Carta. As one account says, ‘They freely quoted passages from the Western pillars of democratic freedoms’, and they stuck on their ‘Democracy Wall’ various historic documents, ‘ranging from Magna Carta to the American Declaration of Independence’ (2).

Those barons who pressured a king to give his seal to a document in an English field 800 years ago could not have imagined the extraordinary impact it would have on human affairs, reshaping not just England but also America and France and even inspiring activists as far afield as Africa and China. This shows that once it had been expressed, the fundamental idea contained with Magna Carta — that restraints are required to limit officialdom’s power — could not be suppressed; the genie could not be forced back in the bottle. More importantly, it shows that freedom must be fought for over and over again. Magna Carta on its own guarantees nothing. How could it? It is merely a piece of paper. Rather, it was the human urge for more liberty, the desire to enjoy choice and freedom and a private life away from the prying eyes and barging elbows of authority, that encouraged future generations to act on Magna Carta, to demand that it be respected and expanded and made into a living, breathing, constitutional reality.

The problem we face today is profound. Firstly, respect for legal rights is in short supply, as evidenced in everything from British governments’ assaults on the right to silence and the ‘double jeopardy’ rule to America’s undermining of the Fourth Amendment through its spying on citizens. And secondly, even worse, the spirit of freedom, the urge within citizens for greater liberty and autonomy, seems weak, too. In short, the two things that guaranteed Magna Carta’s historic, humanity-changing impact — first, the rights it articulated on paper, and second, successive generations’ determination to make those rights real— are waning. And so we are seeing the gains of the Magna Carta era, of the past 800 years of pretty much non-stop struggling for greater liberty, being slowly undermined.

We need a new and serious debate on freedom, on why it’s important and why we need more of it. Magna Carta did not only articulate the rule of law — it also, through its shackling of a divine king in the name of the freedom of non-divine barons, promised a rebalancing of the relationship between the state and the individual, with the former being bound by rules in order to allow the latter to get on with his life as he sees fit. Today, that relationship is being turned around: the sovereignty of the individual seems weak, while the authority of the state, on everything from what we say to how we parent, is growing. Inspired by Magna Carta, and by the many generations who cited it in their fights for freedom, we need to find a way to fortify the ‘brazen wall’, the ‘impregnable bulwark’, between the state and the individual. spiked starts that debate today.