Yemen and the unravelling of Western power

The dead hand of intervention is destroying another Middle Eastern state. 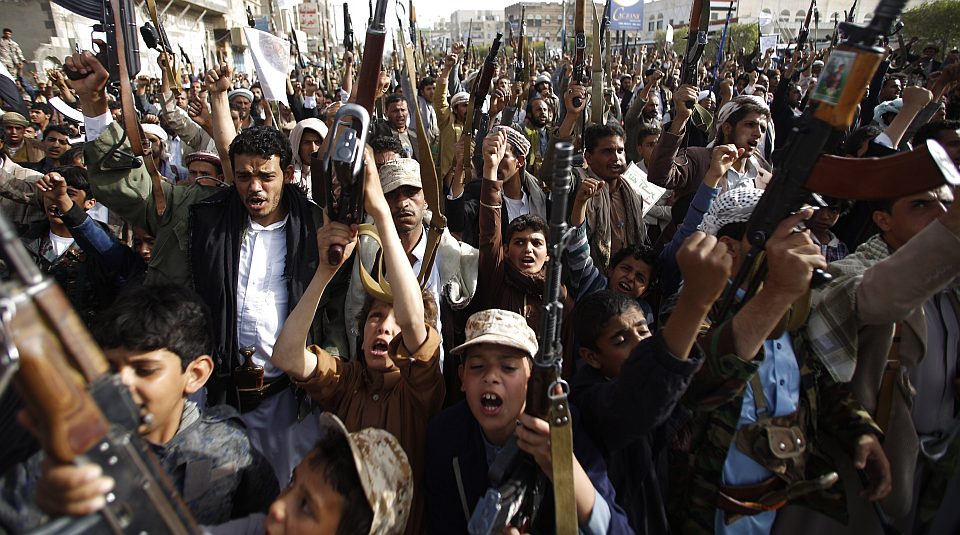 So the unravelling continues. From Libya to Iraq, borders drawn in the sand in the long aftermath of the First World War are being erased. States, for so long held together by assorted military and monarchical strongmen, are disintegrating. Large territorial entities are shattering along tribal and factional lines. And to this list of the unravelled, we can now add Yemen.

In September, the Houthis, a Zaydi Shia movement from northern Yemen, swept into the capital Sanaa, before advancing south towards the Gulf of Aden. Yemen’s ruler since the beginning of 2012, President Abd Rabbuh Mansur Hadi, fled to Riyadh, Saudi Arabia. The Houthis have not been the only ones agitating. Parts of largely Sunni south Yemen are seeking to secede and reinstate some semblance of their former independence. And, as the fighting increasingly collapses along tribal and factional lines, Al-Qaeda in the Arabian Peninsula (AQAP), which has operated an increasingly successful operation in the south and east, and now ISIS, are seeking to pose as the vanguard of Sunni, anti-Houthi resistance. Much of this had passed the Western media by. What didn’t, however, was the response of Yemen’s neighbours and chief sponsor of Haidi, Saudi Arabia. Confronted by a collapsing state on its southern border, the Sauds have been bombing northern Yemen since the end of March. Over a 1,000 Yemenis have been killed during the bombardment, and 4,000 injured.

But what we’re witnessing is not just a localised conflict. Rather, it’s a manifestation of the disordering of the region, a manifestation of the absence of a controlling force, a manifestation of the lack of a dominant power, let alone a legitimate authority. As the shifting shape of Iraq or Syria shows, with groups from the Kurds to Islamic State taking advantage of the collapsing of central state power, it’s all up for grabs now. This is certainly true of Yemen. Assorted factions within, from the secessionist al-Hirak in the south to the Houthis in the north, are grappling for power and territory. And assorted factions without, from the Shia theocracy of Iran to the Sunni monarchies of the Gulf states, with Saudi Arabia to the fore, are seeking influence and, given the rise of such bang-up-to-date stateless terrors as ISIS, security too.

But beyond that, we’re also witnessing the unravelling of the West’s power, the dissipation of its ability to influence and order world affairs. Gone are the days when the likes of America or Britain could carve up the region according to their interests, building kingdoms out of the post-imperial, and in Yemen’s case, post-Ottoman dust. Gone even are the more recent post-Vietnam days when Western powers could shore up a favourable regime with finance and arms, or undermine an unfavourable one by financing and arming its opponents. This isn’t to say the meddling and intervening has ceased. As the past 20-odd years have amply and brutally illustrated, Western intervention continues. But it does so without a clear material rationale, without authority, and without conviction. It is marked by do-gooding postures, and clueless, time-tabled practice.

Yemen is a case in point. Up to the Arab Spring, Yemeni president Ali Abdullah Saleh, the strongman leader of Yemen since its post-1990 unification, and before that the president of North Yemen, had in recent years been a US ally, even allowing the US airforce to use Yemeni airbases as part of the ‘war on terror’. Yet, as resilient as his martially enforced rule looked, like that of Colonel Gaddafi in Libya or Saleh’s one-time ally, Saddam Hussein in Iraq, in reality it was rather more brittle. As one report described the pre-2011 Yemeni state: ‘In many provinces, the Yemeni army has occupied little more than walled military garrisons, and officers often had to ask permission from local sheikhs before embarking on missions.’ Little wonder that when the Arab uprisings spread to Yemen in the Spring of 2011, protesters found that they didn’t have to kick too hard to break Saleh’s door down. As one independent, Houthi-sympathising activist put it at the time, ‘We recognise that we are in a historical moment… All of the traditional power centres are weaker. Everyone is too weak to dominate the others.’

The fact that many in the West were taken by surprise when, one after another, Arab dictators started to fall, shows the waning of Western influence and, pointedly, intelligence. Western leaders were taken aback by the sheer volatility of the situation. They were frightened of its potential to throw up the unexpected, frightened at the extent to which their power and influence had atrophied. Little wonder that the Yemeni uprising in 2011 was soon subject to the constant interference of external agents, from the US to the Saudi-dominated Gulf Cooperation Council.

At the beginning, the US was against Saleh’s overthrow. As one former US ambassador to Yemen put it in March 2011, ‘For right now, he’s our guy’. In fact, as the protests and fighting developed during 2011, US forces, which were already in the region to fight AQAP, were even redeployed to Sanaa to try to quell the uprising. By the end of 2011, future CIA director John Brennan admitted that the ‘political tumult’ had led US forces ‘to be focused on their positioning for internal political purposes as opposed to doing all they can against AQAP’.

But, as it became clear that the Yemeni status quo was untenable, the US, alongside its international and regional allies, including Saudi Arabia, changed tack. They sought to manage the transition. Or, in non-euphemistic terms, they sought to determine the conclusion of the uprising. The result, overseen by the Saudi-dominated GCC and the US-led UN, and agreed in November 2011, was the so-called Yemeni transition agreement, in which Saleh was allowed a dignified send-off, and his deputy, Abd Rabbo Mansour Hadi, took over early in 2012. Plus ca change… As a Houthi sympathiser put it at the time: ‘What is positive about the GCC initiative? Has anything good come out of Saudi Arabia in Yemen? Outside interests generally never serve Yemeni interests. Yemen needs a national programme for change, not the GCC initiative.’ Indeed, if any indication was needed as to whose interests Hadi would have to serve, it was clear from his inaugural presidential statement: ‘Today, we are laying the new basis for the peaceful transfer of power. This rule, which we hope will continue in this manner, is a demand of the Yemeni people. One of the most prominent tasks is the continuation of war against al-Qaeda as a religious and national duty.’ In other words, Yemen was on the US side in the ‘war on terror’.

Guiding Yemen into the post-Arab Spring future, then, was the dead hand of the US and Saudi Arabia. This was an attempt to secure Yemen, to bend the Yemeni state to the will of the West and its regional allies. But, as in Iraq or Afghanistan or Libya, this attempt to direct proceedings from upon high, to order the affairs of a whole people from without, ran up against the reality of such an abstract operation. Imposing a government on a people can’t work. It merely weakens the state further, depriving it of any means to secure some semblance of popular legitimacy. What support it has comes from without, not from within. In the words of a Sanaa-based researcher: ‘[Hadi] has no military power, no real political power, no support base on the ground, no tribal support base. In reality, what’s he got? It’s the international community.’

It was the attempt of the West and its regional allies to truncate the uprising and then direct the course of Yemeni affairs that created the conditions for the Houthis to mount their partial takeover in September last year. They, alongside assorted other tribal and sectional groups, from al-Hirak to al-Qaeda, have responded to, and exploited, the vacuum that is Hadi’s hollow state. Moreover, the power behind the Houthis’ would-be throne is reportedly being provided by Saleh himself. Given that Saleh still commands the loyalty of much of the Yemeni army, that explains why the Houthis were able to move into the capital with so little resistance. As a UN report concludes: ‘[Sanaa] is guarded by no less than 100,000 Republican Guards and reserve forces, most of them loyal to the former president.’

And the internal power vacuum in Yemen is not just sucking in local forces, of course; it drags in external ones, too. Since the Houthis began their assault on Hadi’s limited powerbase, the US and the Sauds have continued to cling to the terms of the transition agreement. ‘We continue to urge all parties to abide by the terms of the Peace and National Partnership Agreement, the GCC initiative and its implementation mechanism’, a US State Department spokesperson said in a press conference at the end of January. Saudi Arabia’s bombing campaign, which is targeting the sections of the army still loyal to Saleh more than the Houthis, is merely the latest stage in the attempt to return Yemen to its US-embossed sticking plaster of a state.

But such is the ruse of interventionist reason, that with every regional and international attempt to influence proceedings, to fill the power vacuum created by years of meddling, the situation becomes more volatile, not less, more messy, more chaotic. Once a conflict is internationalised, other external interests are dragged in deeper and deeper, and internal tensions are exacerbated further and further. So while it’s unclear how much of role Iran has played so far in backing the Houthis, despite the claims of the Sauds, that role is now only likely to increase, much as it has already in Iraq and in Syria. As the Iranian MP Ali Reza Zakani boasted at the end of last year, after Beirut, Damascus and Baghdad, a fourth capital, Sanaa, is now in Iranian hands.

While that’s open to question, what’s not is the West’s continued implication in the affairs of the region, sowing instability and uncertainty in its clueless, often incoherent attempts to influence affairs, blasting bad guys there, and propping up bad guys here, while all the time removing the power of self-determination from the people of the region. It’s a dangerous mess. We are witnessing an unravelling all right – the unravelling of a region’s order, and the unravelling of the West’s capacity to impose order. Not so much because it lacks the might, but because today, purposeless and directionless, it lacks the right.