Smashing statues: the chilling desire to be free from history

The new fashion for defacement is intolerant and vengeful. 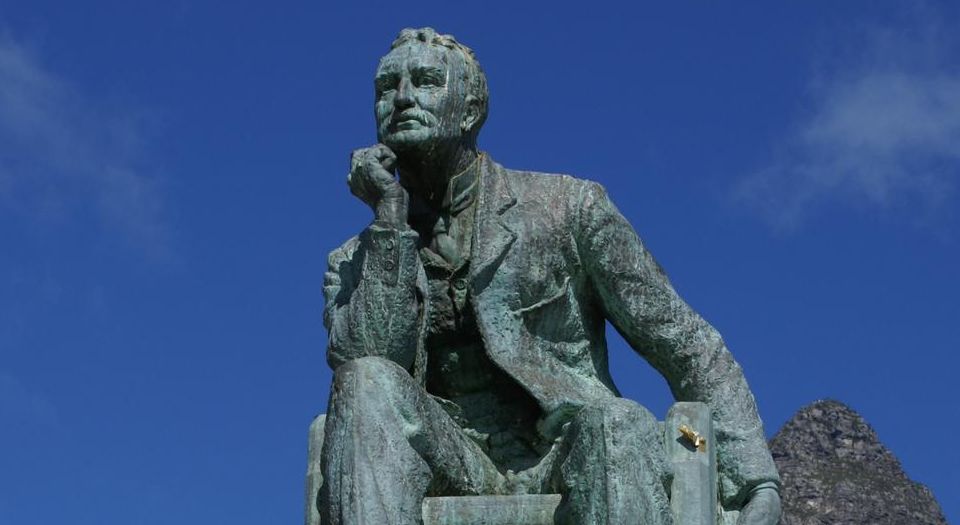 In the previous week, two examples of iconoclasm have been in the news.

In the first, one colonial-era statue of Cecil Rhodes at the University of Cape Town was removed from campus after protests. What’s more, a statue of Queen Victoria, among others, was defaced with paint in the coastal town of Port Elizabeth. The University of Cape Town authorities had initially suggested the compromise of moving the Rhodes statue to a less prominent position. On 8 April, the statue was removed with no agreed plan to have it relocated. The leading activists who are supporting the destruction and defacement of the monuments are members of South Africa’s black majority.

In the second case, the Ukrainian government has passed a law ordering the removal of all Soviet-era statues. (In an audacious display of apparent even-handedness, the government also banned public Nazi monuments – there is none.) All public buildings, spaces and streets named after Soviet figures will be renamed. The destruction began on 11 April, with activists destroying three statues in Kharkov. Although the law had not yet been approved by the president, Ukrainian police did not intervene to protect the statues.

In both South Africa and Ukraine, the iconoclastic activities were instigated for political reasons and were not spontaneous. They were parts of long-term struggles for political supremacy between ethnic factions.

The phenomenon of replacing symbols is not new. Every revolution or change in government is accompanied by some degree of iconoclasm, genteel or violent. This can range from the changing of a royal profile on coinage to the tearing down of the Bastille. Symbols of former political regimes have ever been targets for virtually consequence-free political vengeance. After all, statues do not fight back. Once a statue is destroyed, there is very rarely the social will and financial support to restore it. Inertia has the upper hand. It is always the sign of a regime’s moral and political weakness when authorities overtly or tacitly encourage the suppression of all symbols which seem to contradict its ideology. A confident and secure government – and populace – does not find such symbols threatening.

Ukraine and South Africa in 2015 are not beset by oppressive, insistent symbols of alien ideology in their public spaces. They are not in revolutionary fervour. Both countries have been independent for substantial periods: since 1991 in the case of Ukraine; since 1910, 1961 or 1994 (depending on your preference) in the case of South Africa. Since achieving independence, both have erected their share of new monuments and changed the fabric of their cities for reasons civic, commercial and political. Many symbols of preceding regimes have already been destroyed. What is new today is the concerted urge to erase all monuments of ‘politically objectionable’ eras due to contingent political conditions.

Cultural suppression is a tool used by individuals and groups for immediate political advantage. The instigators of iconoclasm do not face the consequences nor bear the costs. They and their ideas will be gone in 10 or 20 years’ time. What right do they (or we) have to alter the historical record for future generations? Living environments must change, but societies benefit when they preserve certain representative aspects of all eras of their history, even ones that are awkward.

Public monuments are not sacred. When monuments become too decrepit or dangerous, they have to be removed if they are not actively restored. Cities are dynamic environments; monuments have to be removed if street plans are altered or buildings demolished. Some of the more distinguished monuments can be relocated or sold, if they are moveable. The case of site-specific sculptures of recent origin is a different category, legally and aesthetically speaking, and is a subject for debate in itself.

Today, one particular obstacle to preserving unpopular symbols is that moderates and liberals, who might otherwise be counted on to oppose the destruction of cultural history (albeit the subjects under discussion might be closer to propaganda than to fine art), are hamstrung by a reluctance to speak up in a way that could be interpreted as supporting ideas they do not believe in. For example, how is a liberal, white South African able to oppose the defacement of a statue of Queen Victoria without seeming to condone colonial (and, by connection, Apartheid) authority?

Once society deems the current political significance of a monument more important than its historical or aesthetic value, it becomes very difficult to argue in terms of these ‘lesser’ values. A: ‘I oppose the destruction of this monument on cultural grounds, even though I agree it is politically odious.’ B: ‘If you genuinely did believe the politics embodied in this monument are odious, then you would not oppose its destruction. This is a political matter with a political solution: preserve or destroy.’ In such an atmosphere, politics trumps every other consideration. There is little incentive to defend a monument one opposes politically but wishes to preserve for historical and aesthetic reasons, especially if one is in a minority and likely to lose the argument. It is this great difficulty of recognising and responding to others’ mixed and multiple motives that makes honest discussion of this issue virtually impossible.

The destruction of monuments is not a neutral balancing of some ledger of social injustice. It is a form of vengeance designed to inflict suffering on living people, removing from existence a landmark (often a much-loved one) of people’s childhood and youth. Concerted erasure of symbolism is a decidedly petulant form of intolerance. Erasure stamps the power of the current political consensus and erases a marker of a previous era. In 1990, Germany was not unified in a new state. The GDR was simply dissolved and incorporated into the existing West Germany. Not only was the state and ideology of the GDR erased, many of its monuments (even the more apolitical ones) were forcibly destroyed. It was a deliberate act of revenge and contempt on the part of the victorious faction. The removal of monuments necessarily entailed the humiliation of the losing faction. The actions in South Africa and Ukraine are in no sense different to past programmes of political and personal humiliation.

Enforced cultural amnesia diminishes the richness of a society’s own cultural life by excising parts of history that are politically inexpedient. It deliberately distorts history and mutes the voice of a former age. Even if one is opposed to an ideology, one must understand it to oppose it effectively and argue from a position of knowledge. The fear of encountering anything contradictory to one’s worldview is another aspect of the desire to have ‘freedom from speech’, which Greg Lukianoff identified in his latest book about censorship on American university campuses. In the case of the destruction of monuments, this censorious desire is even more extreme. It represents a desire for ‘freedom from history’ – from the speech of dead people and vanished authorities. These modern iconoclasts’ abhorrence of past ideas, and their desire to attack a present-day rival group, means they have a double incentive to remove unpopular symbols.

Groups which seek to destroy public monuments do not feel they have any obligation to present historical periods in a balanced and honest manner. The stiffness, grandiosity and absurdity of the worst excesses in public monuments undermine their own credibility, but, to the censorious mentality, the danger is that if anyone is exposed to it, the monument may plant a seed of support. In the case of Valle de los Caídos, Franco’s gigantic mausoleum, partly built with slave labour, political deadlock in the immediate post-Franco era led to the monument being preserved, though it is deteriorating. It acts not so much as a symbol of glorious Falangist power, but as an eloquent testimony to tyranny and futility, more effective than a blank site or counter monument.

The unreasonable means of defacement, vandalism and destruction (legal or illegal) of monuments is justified in order to further the iconoclast’s just cause. This twisted logic can be applied to words and ideas just as easily to monuments. If a moderate majority fail to oppose this approach here, they will encounter it soon enough in other areas, perhaps more serious. How long will it be before societies which cannot bear the sight of partisan monuments cannot even tolerate the existence of partisan books? Are bigots and demagogues testing how far they can go, by destroying the legacies of the unresisting dead, before they move on to the living opponents of today?