Indiana: why we must be free to discriminate 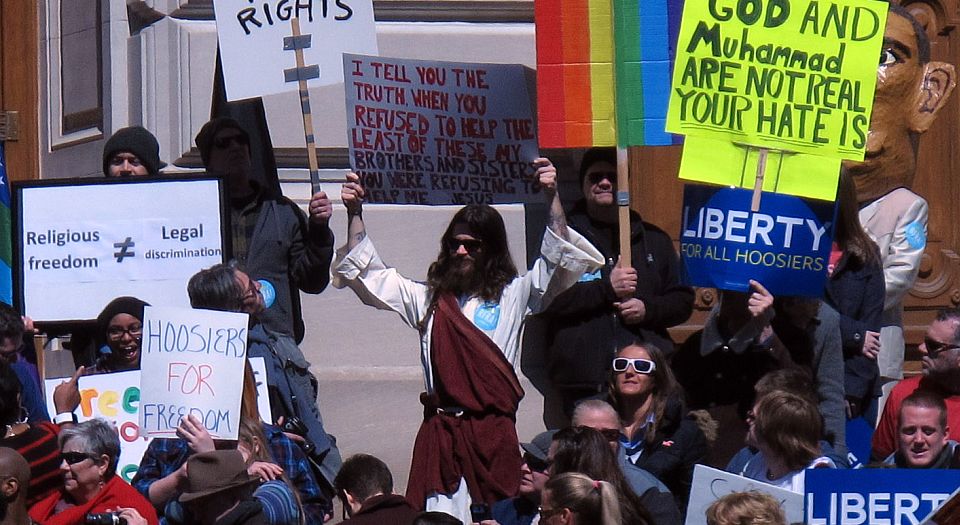 It is a miserable irony today that those who think of themselves as liberal are actively trashing liberal ideals. Of course, they don’t experience their illiberalism as illiberalism. Quite the opposite. As far as they’re concerned, they’re riding on the right side of history, battling bigotry and hunting down hate wherever they suspect its persistence, and leading us all into an ultra-nice rainbow-coloured future. They’re the tolerant ones. They’re the progressives. They’re the good guys.

And yet in their zeal to fight discrimination, often with the law at their heel, they have turned their professed liberalism into its opposite: an unwitting illiberalism, in which key liberal tenets, from freedom of conscience to its corollary, freedom of association, are trampled over in the headlong rush to create a society in their achingly right-on, gay-marriage-supporting, transphobia-fighting image. The road to intolerance, it seems, is paved with do-gooding intentions.

We can see this liberal-illiberal dynamic at work in the US in the furore over Indiana’s so-called religious-freedom law. The Indiana Senate Bill 101, also known as the Religious Freedom Restoration Act (RFRA), ought not to be that controversial. Twenty other states have enacted the RFRA since then US president Bill Clinton introduced it in 1993, a move designed to overturn a 1990 Supreme Court ruling (against a man sacked for using peyote as part of a religious ceremony) that made it easier to restrict religious practices. So uncontroversial was the RFRA at the time that it secured near unanimous, bipartisan support in the Senate. (Read the New York Times’ decidedly unaghast report at the time.)

But today things are clearly different. Liberal principles have been routed by identity politics. Religious freedom, the freedom to act according to one’s conscience, is now considered a problem, an omnipresent threat to the increasingly state-enforced recognise’n’respect-me politics which is now predominant. For too many, the idea of religious freedom merely generates a series of worrying questions: what if individuals have the wrong beliefs?; what if individuals refuse to associate with those they profoundly disagree with?; what if individuals – cue gasps of horror – think gay marriage is wrong? Judgement and discrimination, all part of the exercise of a free conscience, terrify those cleaving to some vague notion of non-judgemental pluralism. Little wonder that Apple CEO Tim Cook was shocked by the idea of ‘allow[ing] people to discriminate against their neighbours’.

Not that Cook was alone. Where the 1993 introduction of the RFRA was greeted by a barely discernable ripple of applause, Indiana’s version has prompted a celeb-packed, Twittered-up meltdownathon, complete with a #BoycottIndiana hastag, and a declaration from a host of city and state politicians to stop government-funded travel to Indiana. Nancy Pelosi, the minority leader of the House of Represenatives, simply said: ‘History will not look kindly on this new Indiana state law, which turns back the clock on equality for all citizens.’

Pelosi’s recourse to the judgement of posterity – ‘history will not look kindly…’ – reveals the extent to which those in a flap over Indiana’s RFRA are absolutely convinced they’re on the side of progress. Tim Cook even went so far as to call the Indiana RFRA a return to Jim Crow-era segregation. Because that is how the idea of discrimination is conceived by those committed to an identity-politics version of equality: as a backward step, a regression, a form of racial atavism with an anti-LGBT twist.

Discrimination appears, then, as an affront to people’s freedom to celebrate their identities, a violation of the universal demand to be recognised for being different. Christian-owned Ashers Baking Company in Northern Ireland discovered this to its cost last summer when it declined an order to make a cake emblazoned with the call ‘Support gay marriage’, a Queerspace logo, and a picture of Bert and Ernie from Sesame Street. The customer-cum-activist may have had his cake and eaten it elsewhere, but that didn’t stop him taking Ashers to court, with backing from Northern Ireland’s Equality Commission, on the grounds that he had been discriminated against because he was gay. Strictly speaking, he had been discriminated against, not because he was gay, but because he wanted a propaganda-cake baked with a message the bakers’ owners disagreed with. But the sheer fact of discrimination was enough. Campaigners, hackles raised and equality laws at the ready, had their good cause.

In the eyes of campaigners on both sides of the Atlantic, discrimination is to be eradicated. To give it a degree of legal protection, as the RFRA promises to do, will mean that Christian bakers won’t have to bake gay-marriage-supporting cakes, that Catholic societies won’t have to embrace adverts for abortion-providers, that, in short, the devout won’t have to break bread with those of whom they disapprove. And that is terrifying. Discrimination – the result of individuals exercising their freedom of conscience – will destroy the social fabric.

This ought not to be a surprising argument. Freedom of conscience, its dominant expression, religious freedom, and its result, the freedom to discriminate, ought to be fundamental aspects of any society that considers itself liberal, or, indeed, tolerant. It means that when it comes to the free association of men and women in society, the civil power, state or otherwise, has no, well, power. People should be free to associate with those sharing the same beliefs, and to exclude those who don’t. This was certainly the view of the Founding Fathers’ great influence, John Locke, who argued in A Letter Concerning Toleration that while the civil power ought to be concerned with protecting civil interests, from individuals’ liberty and health, and ‘the possession of outward things, such as money, lands, houses, furniture, and the like’, it had no jurisdiction when it came to someone’s faith, how they tended to the ‘salvation of [their] souls’. Likewise, it has no power over the ‘voluntary societies of men’, or churches, that were established on the basis of individual’s shared beliefs. Who was to be included and excluded was up to the society itself, not an external body: ‘[S]ince the joining together of several members into this church-society… is absolutely free and spontaneous, it necessarily follows that the right of making its laws can belong to none but the society itself; or, at least (which is the same thing), to those whom the society by common consent has authorised thereunto.’

Or take Hannah Arendt’s criticism of the forced desegregation of schools in Little Rock, Arkansas in the late 1950s. Arendt was a staunch advocate of equality, but only, as she saw it, in its proper sphere – namely, the political. By this she meant universal suffrage, everyone being potentially eligible for office and so on. But outside the body politic, in the social sphere, that intermediate space between the exclusivity of the private realm and the inclusivity of the political, the freedom to discriminate is essential. In that social space, Arendt wrote, we seek out company, pursue a vocation, and, consequently, associate with the people we choose to associate with, while excluding those we choose not to. Arendt, like Locke, did not think the freedom to discriminate, to include some and exclude others from an organisation or customers from a business, was absolute. Far from it. Rather, she was concerned to establish when discrimination is legitimate and when it’s not. She defends, for example, the right to free association of a Jew-only holiday resort, and, of course, segregated schools, but not that of segregated transport, or no-blacks hotels or restaurants in a business district. The latter cases, she argues, whether they involve privately or publicly owned businesses, exist in the public realm, and as such their discriminatory acts clearly inhibit an individual’s ability to pursue his life as he wants to.

But the one thing Arendt was unequivocally opposed to, which today’s self-styled progressives seem to support, was state-driven, legal interference in this social space, turning acts of discrimination which may well fly in the face of prevailing customs or standards into criminal offences. As Arendt put it: ‘The moment social discrimination is abolished, the freedom of society is legally abolished.’

And it is precisely the abolition of social discrimination that today’s identity-conscious, equality-law pushing gangs of the outraged are seeking. In every act of discrimination in the social sphere they see evidence of deviant thought, beliefs that run counter to the consensus, that threaten the consensus, and that therefore must be extinguished. ‘Indiana is not protecting religious freedom’, writes one commentator. ‘[Indiana’s lawmakers] are protecting a very specific brand of zealotry. They are protecting bigotry.’ And bigotry, as heterodox beliefs are now uniformly called, be they religious or otherwise, must be stamped out, ideally with a raft of legislation and the backing of an equalities commission. This is the intolerant trajectory of what passes for contemporary liberalism. As liberals from Locke to Arendt recognised, the assault on social discrimination is an assault on our ability to think and act in accordance with our beliefs.