Politicians are too tied to environmentalism to oppose austerity. 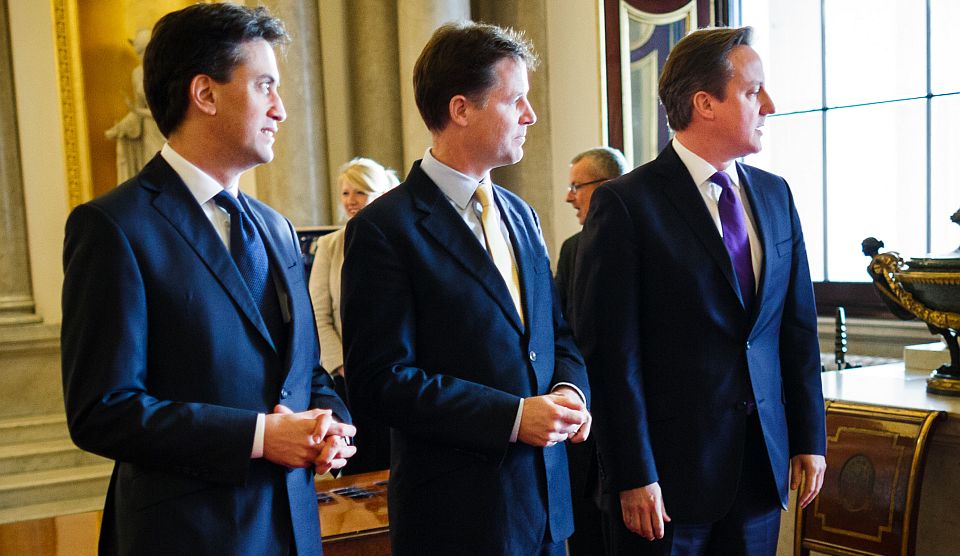 All three of them were there: UK prime minister and Tory leader David Cameron, his deputy and Lib Dem leader Nick Clegg, and Labour leader Ed Miliband. It was only a few weeks ago, too. The General Election was meant to be looming, the arguments and debates hotting up. But, no, there they all were, green NGO lobbyists lurking in the background, signing a joint pledge to fight climate change regardless of who won the election. This was all about agreement, consensus. As far as Cam, Cleggers and the Miliband brother were concerned, the issue of climate change and its policy imperatives, such as carbon budgets and ‘the transition to a low-carbon economy’, were simply not up for argument. In effect, they agreed to put climate change beyond debate.

If you ever needed a more striking example of just how little separates the different brands of the political class, it’s this politics-defying moment: three fortysomething, corporate-suited men-about-Westminster all agreeing that there are some things you just can’t talk about in front of the electorate.

It was a shockingly undemocratic moment. But not a surprising one. The fortunes of what was to become environmentalism may have waxed and waned ever since reactionary cleric Thomas Malthus first suggested, in the late eighteenth century, that there are natural limits to what Enlightenment philosophes’ posited as unlimited social and material progress. But, with the slowdown of Western economies from the 1970s onwards, environmentalist sentiment, the belief that human society has gone as far as it can and should, has gradually come to dominate the worldview of Western elites. Hence it is now effectively the ideology of the West’s clueless, futureless political leaders.

And little wonder. Environmentalism didn’t just rationalise away economic stagnation as something natural (with the growth of the financial services sector, and a series of credit-pumped bubbles providing illusory optimistic interludes). It turned the potential failure materially to advance society, to grow the economy, into something almost virtuous, something that mightn’t be such a bad thing. Born from Malthus’s opposition to Enlightenment reason, an opposition to the confidence in man’s ability to master nature, and to drag society towards a gleaming, ever-more prosperous, ever-freer future, environmentalism, in its late twentieth and early twenty-first-century incarnations, allowed Western leaders to disavow all that Enlightenment baggage, to recast modernity as something rapaciously industrial, tyrannical and hubristic. We should know our place. Not championing growth became virtuous. Not seeking to master nature became wise. And consuming and producing less? That became the dream.

So the fact that the UK’s three party-political amigos showed the depth of their commitment to environmentalism and ‘fighting climate change’ by attempting to de-politicise it was really only to be expected. It is their ideology, their grand narrative. The avoidance of a scorched and sunken dystopia is the closest Cameron and pals have to a big, unifying idea, the end that makes sense of all their low-fi policies, be it diminished energy production, limited house building or no-growth economics. They can as little do without environmentalist sentiment as they can PR consultants. It makes sense of their role.

But there’s something else going on, too. Back in the mid-2000s, when the papers were daily full of green-tinted End of Days predictions, Lord Stern’s economics-of-climate-change dirges excited the Guardian-subscribing classes and people actually bothered to read the latest IPCC report, politicians were desperate to display their climate-change-fighting credentials. So in 2006, a pre-prime-ministerial David Cameron was hugging huskies in the Arctic, a pre-prime ministerial Gordon Brown was making climate change his big cause at the Fabian Society’s annual conference, and a never-to-be-prime-minister David Miliband was talking excitedly of prioritising ‘carbon thrift, as well as economic thrift’. Consume less, cut back and make do – that was the mantra.

The commentariat also seemed militantly environmentalist. A columnist writing in the Financial Times in 2006 argued that ‘rationing provides the best solution to the problem of reducing carbon emissions quickly, dramatically and equitably’. In the New Statesman one writer argued, in a piece called ‘Why we must ration the future’, that because ‘carbon rationing represents a total break with business as usual… it is the only climate-change policy that will work’. In 2007, the Guardian’s George Monbiot boasted that environmentalism was a ‘campaign not for abundance but for austerity’. ‘Bring on the recession’, he said.

But that militancy ceased, and that party-political enthusiasm for all things green became more muted, less strident, as the economic crisis and subsequent recession unfolded. So why has environmentalism retreated behind semi-closed doors? Because it has been a victim of its own miserable success. The limiting, the cutting back, the restraint, the austerity, all of which had been called for with such grim glee before 2008, had now become a reluctant reality. To promote environmentalist thinking with the same vigour in the midst of the recession now just sounds like an endorsement of the recession – which, effectively, it always was. But that poses a problem for politicians who at least want to offer the promise to the electorate, albeit in bad faith, that things might get better. And it poses a problem for reactionary lefties, who embraced environmentalist tropes with such opportunist anti-capitalist glee before 2008, but who now want to challenge austerity. Environmentalism, a theory of natural limits, is intrinsically pro-austerity; to be anti-austerity and environmentalist is a contradiction in terms.

This is one of the great unspoken paradoxes of contemporary politics. Ahead of the General Election, the very same politicians and commentators who once displayed their environmentalist credentials, their restrain ’em and ration ’em sentiments, with such pride, now claim to be vehemently anti-austerity. Miliband recently ramped up his anti-austerity gurning, moaning about how much ‘Tory cuts’ are taking away from British men and women. Monbiot raged against ‘the continued implementation of austerity’. Even Green Party leader Natalie Bennett, who had been let out for the day at the Greens’ spring conference, called for an ‘end [to] the failed austerity experiment’.

Yet, behind the big-spending bluster, through the fug of anti-austerity posing, this same elite network remain absolutely shot through with environmentalist thinking, the same thinking that calls on us to change our behaviour, to ration our consumption, to accept the limits to growth. The same thinking that disavows Enlightenment and modernity as just so much human-centric error. And someone like Miliband asks us to believe he’s opposed to austerity. Is he having a laugh? One minute he’s denouncing the nasty Tories for their austerity regime, the next he’s pledging his commitment to the ‘fight against climate change’ in coalition with Cam and Cleggers.

This isn’t a problem confined to the UK. We’ve seen it in Europe, where parties like Syriza pose as the enemies of austerity while embracing every green-hued prejudice going. It’s a profound and troublesome contradiction, and it’s one that needs to be overcome. Because the biggest impediment to a genuinely anti-austerity, pro-abundance politics is not Cameron or so-called neoliberalism; it’s the environmentalism that, for too long, has held Western political elites in its baleful thrall.