Hating modernity, hating the Jews: a reckoning with Heidegger

Why the German thinker's anti-human ideas live on. 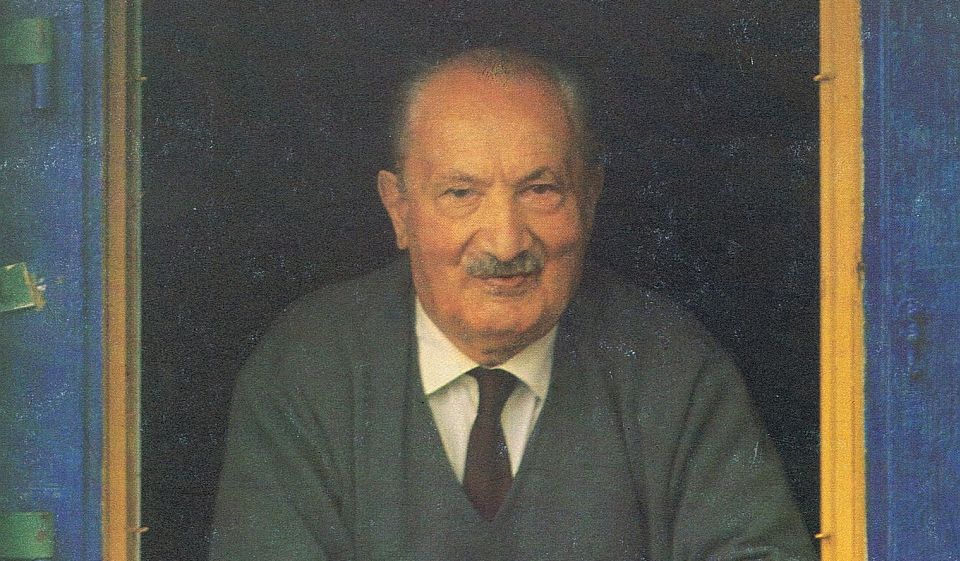 That Martin Heidegger is still frightening the liberals is hardly a surprise. His thought, which blustered and bloomed in interwar Germany, always drew deep on the catastrophic-cum-redemptive impulses of that most excitedly destructive of historical moments. The intellectual air in which Heidegger breathed was thick with heady pessimism. While Oswald Spengler was issuing his downbeat prognosis, The Decline of the West, Max Weber, surveying the ‘disenchantment of the world’, was waxing disappointedly about people’s post-faith entrapment in the ‘iron cage of rationality’. But, as shown by the appeal of the war-worshipping Ernst Junger or the democracy-challenging Carl Schmitt, there was something else in the air, too: revolution, be it of the Bolshevik or, in Heidegger’s case, conservative, anti-capitalist, anti-liberal, anti-modern variety. For liberal democratic society, the end was most definitely felt to be nigh.

This apocalyptic yearning remained opaque in Heidegger’s opus Being and Time, published in 1927. But by the time of Heidegger’s year-long rectorship of the University of Freiburg in 1933, it was clearly National Socialist. He spoke in praise of Nazi icon Leo Schlageter, a swastika often adorned his lapel, and each one of his famous lectures was prefaced by a whole-hearted Heil Hitler. What’s more, through his virulently anti-Semitic wife, he informed his one-time mentor, the Jewish philosopher Edmund Husserl, that he agreed with the ‘hard new law, rational from Germans’ point of view’, which excluded Jews from university teaching. He may have retreated from the frontline of Nazi politics in 1934, but his card-carrying commitment, which lasted until the bitter end in 1945, was as unstinting as his friendship with Eugene Fischer, director of the Berlin Institute for Racial Hygiene.

All of which would have been unremarkable if Heidegger’s work wasn’t so remarkable. ‘The secret king of thought’, Hannah Arendt called him. Her assessment is not far off the mark. His vision of the possibility of an authentic existence ran through French postwar existentialism; his ‘destruktion’ of Western metaphysics inspired any number of structuralisms, post- or otherwise; and, more broadly, his probing, elusive critique of modernity seduced large swathes of the intellectual left, emboldened the resolutely conservative, and revitalised the elusively theological. For thinkers as diverse as the French Communist Louis Althusser, the proto-neoconservative Leo Strauss, the countercultural inspiration Herbert Marcuse, or the godly Emmanuel Levinas, Heidegger was the devil in their detail.

But with the immense debt owed to Heidegger’s thought has come a ceaseless reckoning with his politics. Between 1945 and 1948, Les Temps Modernes, edited by Sartre, Merleau-Ponty, and de Beauvoir, dwelt, defensively, on the relation between Heidegger’s thought and the advent of Nazism. A few years later, the French journal Critique pursued the same question. In the mid-1980s, Victor Farias’s muckraking Heidegger et le Nazisme reignited the controversy, and Hugo Ott’s soberly scathing Martin Heidegger: A Political Life, published in the mid-1990s, fanned the flames. More recently, with Emmanuel Faye’s assiduously researched Heidegger: The Introduction of Nazism into Philosophy to the fore, the question of whether this massively influential thinker was also a massively Nazi thinker has been asked with increasing urgency.

Now, with the German-language publication of several volumes of Heidegger’s Schwarze Hefte (the ‘Black Notebooks’) from the 1930s and 1940s (he carried on writing them up until the 1970s), the focus on Heidegger’s putative Nazism, and especially his anti-Semitism, has intensified. Which is hardly surprising given the frequency with which Heidegger bemoans ‘Jewry’s temporary increase in power’, and their ‘tenacious aptitude for calculating and profiteering and intermingling’ in a series of entries from the late 1930s and early 1940s. So unvarnished, not to mention banal, is Heidegger’s anti-Semitism, that earlier this year the University of Freiburg philosopher Günter Figal resigned as chair of the Martin Heidegger Society. ‘After reading the Schwarze Hefte, especially the anti-Semitic passages, I do not wish to be such a representative any longer’, Figal said. ‘These statements have not only shocked me, but have turned me around to such an extent that it has become difficult to be a co-representative of this [society].’

Heidegger has not been without a defence. Philosophers Jonathan Rée and Bernard-Henri Lévy have been quick to point out that although Heidegger may have been a nasty man, his thought still demands attention. Others, such as Domenico Losurdo, defend Heidegger against the wilful self-incrimination of the Schwarze Hefte by pointing out that his Nazism has long been public knowledge. And, to an extent, his defenders have a point. Heidegger’s thought is too significant to be ad hominemed out of the canon. And Heidegger’s commitment to Nazisim was as plain as the Hitler-era tache on his face. After all, in a lecture from 1935, Heidegger spoke plainly of ‘the inner truth and greatness of National Socialism’. And, more disconcertingly, in a 1949 lecture, which would be reworked in 1953 as The Question Concerning Technology, he asserted: ‘Agriculture is now a motorised food industry – in essence the same as the manufacturing of corpses in gas chambers and extermination camps, the same as blockading and starving of nations, the same as the manufacture of hydrogen bombs.’ Just in case you missed that: Heidegger thought that mechanised food production is, ‘in essence’ (a favourite Heidegger move), equivalent to the systematic extermination of Jewry.

But in an important way, the eternally recurring Heidegger controversy always misses the point. There is no doubt he was a Nazi. There is no doubt he was an unapologetic anti-Semite, right to the last. He was ‘a small man’, lamented George Steiner. But the point at issue, the point that we must grapple with, is the relationship between his anti-Semitism and the thought that has entranced so many.

For Heidegger, Western civilisation, from Plato and Aristotle onwards, has forgotten the question of being, the Seinsfrage. ‘The being for whom being is a question’, as he put it in Being and Time, has taken to accepting easy answers. Why? Because we have inherited this metaphysical idea that man is a rational animal, a zoon politikon, and, as such, we have tended to view the world instrumentally, as something which we can know and use for our ends. Man is assumed to be the measure of all things. And as humanity has ‘grown up both into and in a traditional way of interpreting itself’, with each generation advancing the course of Western metaphysics, extending this way of seeing and using the world, so we have lost ourselves, have forgotten to ask what it is to be. The modern age is merely the latest, most dangerous instalment in this history of ontological forgetfulness. Technological and instrumental, rational and calculating, the modern way is assumed to be the only way. Even our language has been reduced ‘to being an instrument of domination over beings’, as Heidegger put it in the Letter on Humanism (1946). Heidegger continued this criticism of humanist instrumentalism in The Question Concerning Technology: ‘[We put] to nature the unreasonable demand that it supply energy which can be extracted and stored as such.’ We no longer let beings be – we enslave everything to our ends. And that, argues Heidegger, goes for other humans, too. We are ‘subservient’ to ‘enframing’ – subservient, that is, to the rational, technological, calculating imperatives of modernity. We have become, like all other beings, a mere means for rational, technological, calculating ends. ‘“Life” is a business’, notes Heidegger in Being and Time, ‘whether or not it covers its costs’.

And this is where the Schwarze Hefte are revealing. Heidegger’s anti-Semitism is not incidental to his critique of modernity and the instrumental reason which is destined to hold us in its thrall. It is essential. For Heidegger, Jews, alongside Bolsheviks, are the agents of modernity, and, as such, they are the harbingers of our destruction, the ‘type of humanity’ that has assumed ‘the world-historical “task” of uprooting all beings from Being’. Jews, he continues, belong to ‘the metaphysics of the West’. They have helped to spread both ’empty rationality’ and ‘a capacity for calculation’, and they are intent on realising ‘a rootless, homogeneous, technological mass society’.

What the Schwarze Hefte show, then, is that Heidegger’s anti-Semitism was entwined with his anti-modernity. His critique of the modern world, which was so attractive to so many, always went hand in hand with his critique of the Jews, which has proved discomfiting for so many. But his anti-Semitism can’t be ignored. Only when this association is grasped, only when Heidegger’s identification of Jewry with everything that he loathes about the modern world – its rootlessness, its instrumentalism, and, yes, its human-centredness – becomes clear, does his initially shocking suggestion that the Jews effectively brought the Holocaust on themselves make sense. If the systematic extermination of Jewry is presented as the logical endpoint of humanity’s rootless, technological, calculative trajectory (our ‘destiny’), then the Jews, as the agents of rootless, technological calculative rationality, are indeed the architects of their own downfall.

It’s a revealing moment for those accustomed today to rehearsing platitudes about how meaningless, unfulfilling and destructive the modern world is. Environmentalists and avowed lefties love to spew out sub-Heideggerian theses on the irrational rationality of economic development, of people’s duped immersion in an unsustainable way of life, and of our impending climate-driven comeuppance. But is there not another echo of Heidegger’s thought in that strange, obsessive antipathy towards Israel which is so prevalent among the right-on and left-leaning? If there’s a stench of anti-modernity among too many of today’s self-styled radicals, is there not also a whiff of that peculiar brand of Heidegger-style anti-Semitism, too? Strangely enough, then, the Heidegger case sheds light on a contemporary species of anti-Semitism. It’s not the biological version, in which certain races are deemed superior to others. It’s not even the ‘Jews control the world’ one, although that persists. No, it’s the sense that at some level, Jews, in the form of Israel, embody modernity, embody, that is, the very things – the cruel rationality, the uprootedness, the technological ambition, the comfort with capitalism – that so many just love to loathe. Hating Jews, then, still goes hand in hand with an intense disillusionment with modernity.