The best reason to kick Cameron out? Libya

Why the hell of Libya isn't on the election agenda. Why it should be. 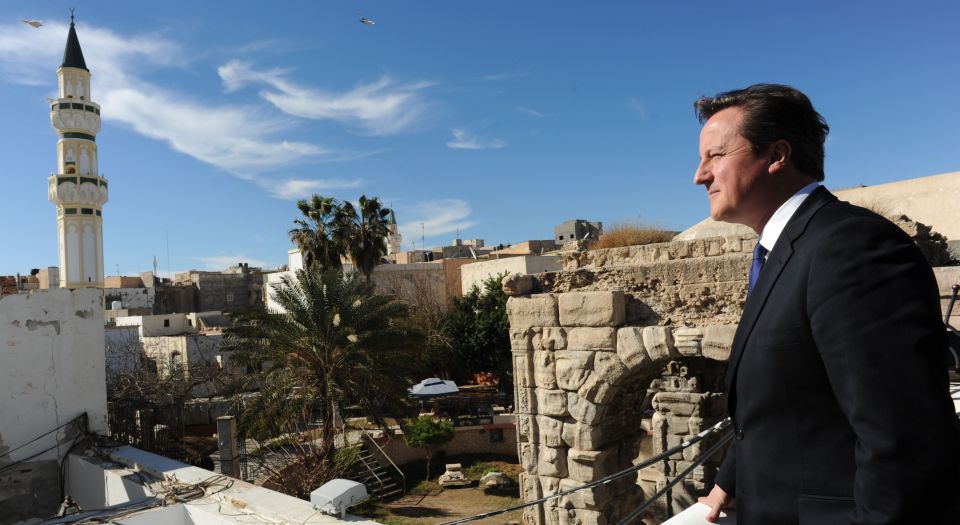 There are many good reasons to boot David Cameron out of Downing Street in May. Here’s one of the best: Libya.

In September 2011, Cameron, flanked by then French president Nicholas Sarkozy, gave a speech in Benghazi at which he congratulated both himself and the Libyan people — but mainly himself — for liberating Libya. NATO airstrikes, which had started six months earlier, had helped rid Libya of Gaddafi and created the conditions for ‘building democracy’, said Cameron. Where Gaddafi had threatened to turn Libya ‘into a hell’ and a ‘failed pariah state festering on Europe’s southern border’, our airstrikes saved it, unleashing a ‘new era’, Cameron trilled — to the cheering not only of Gaddafi-hating rebel groups, but of the British press, too. The Guardian congratulated Cameron for ‘changing the course of history’. ‘It is [now] difficult to argue with the stance Britain and France took on Libya back in March [2011]’, said its chief political correspondent.

And now? Three-and-a-half years on, how’s life in the nation which, according to Conservative Party insiders, the PM thought of as his ‘happy place’, the one unquestionably good thing he did in power? It isn’t happy, that’s for sure. It’s a disaster zone, a deeply divided, collapsing state in which vast swathes of territory are controlled by Islamists and even groups with links to the Islamic State. It is, in short, the very thing Cameron said he’d prevent it from becoming: ‘a hell’, a ‘failed pariah state festering on Europe’s southern border’.

The recent beheading of 21 Egyptian Christians by a Libyan group claiming links with the Islamic State, and the subsequent Egyptian airstrikes, have focused global eyes on ‘liberated Libya’. The same narrative is being pushed in much of the Western media and by Western politicians: a story of the spread of the Islamic State, its leaking from Iraq across the Middle East and north Africa, as if it were a Crusades-in-reverse, marching, black flag in hand, across the Muslim world towards the top of Libya and the Mediterranean, eyeing Europe. Such a narrative misses the real dynamic here, which is not the strength of the Islamic State but rather the vacuum-generating interventionism of the West, the gaping absences of power left by strategy-free Western action, most recently in Libya, into which Islamist forces gratefully and opportunistically move. The hell of Libya isn’t a story of an IS takeover, but one of the West’s evacuation of the one solid source of authority in Libya, which acted as a green light to all kinds of divergent actors to make a stab for influence.

If IS is now active in Libya, this represents merely a mutation of a situation that’s been brewing in the three years since Cameron’s ‘liberation’, rather than signifying any dramatic new development. The new era in Libya is one of vicious factionalism, war and a massive exodus — it’s estimated that, incredibly, almost a third of the country’s population has fled to Tunisia over the past 18 months. Libya now has two governments, with a third possibly emerging. Libya Dawn, an Islamist-dominated outfit, rules in Tripoli, the capital, and considers itself the legitimate government. Dignity, a largely secular grouping, is based in the eastern port city of Tobruk, and claims to govern the country from there. Dignity is recognised as the legitimate government by the international community. This despite the fact that the June 2014 election that it won had a turnout of 18 per cent, down from the 60 per cent of the first post-Gaddafi elections of 2012 (‘reflecting growing disgust with the authorities’ failure to govern’, said The Economist), and despite the fact that many Libyans were prevented from voting in that election for ‘security reasons’: conveniently enough, these were mainly Libyans based in unstable Islamist strongholds, very unlikely to vote for Dignity. As of May 2014, these two ‘governments’ have been at war, with an incredible patchwork of armies and militias pitched against each other. Everything you need to know about the West’s favoured government, Dignity, and about the West’s creation of a ‘new era’ in Libya, is contained in the fact that Dignity now meets in a heavily guarded former Greek car ferry in Tobruk harbour. It’s far from dignified.

Then there’s the third ‘government’, the radical Islamist one. Based in Benghazi, this is a self-styled emirate, declared by the jihadists of Ansar al-Sharia after they seized Benghazi last summer. Elements of Ansar al-Sharia now swear loyalty to the Islamic State and control some important zones, including the eastern coastal city of Derna — hence this development being more a mutation of the post-2011 disarray rather than an IS takeover. As of summer last year, the West’s favoured, ferry-dwelling government of Dignity has been locked in a brutal conflict with both the Islamist-leaning Libya Dawn ‘government’ in Tripoli and with the emirate of Benghazi and numerous other jihadist forces in the east. Three thousand people have died; millions have fled.

All of this is a direct consequence of the West’s bombing campaign. In sweeping aside the one force that had, for better or worse (worse, in spiked’s view), demonstrated a capacity over 40 years for holding together the various tribes and groupings of Libya under a system of three-pronged federalism — that is, the Gaddafi regime — without giving a moment’s thought to what system might replace it, Britain, France and the US turned Libya from a functioning authoritarian state into a gaping hole in north Africa, bereft of the old institutions and open for power grabs of an inevitably violent nature.

This was entirely predictable. Indeed, we at spiked, on the very day the bombing started in 2011, described this act of Western intervention as ‘the barbarism of buffoons’ and said it would be ‘bad for the Libyan people and for global stability’. This is not because we held a candle for Gaddafi — far from it — but because we recognised that external powers’ overnight removal from power of a man and a system that influenced every aspect of politics and public life in Libya, with no devotion of resources to the cultivation of any convincing alternative, was a recipe for profound disarray. The intervention in Libya exposed the extent to which Western foreign policy has become unanchored, cut adrift from any clear strategies or aims on the part of Western governments or from any cool calculation of what is in their best geopolitical interests – hence the Libya venture benefitted neither the Libyan people nor Western powers.

But it’s even worse than the West creating the ground for war: the West has also exacerbated the war now ripping Libya in two. The Dignity ‘government’ on its ferry is cajoled both directly and indirectly by Western forces. When it launched Operation Dignity in May last year — its large-scale assault on Islamist groups, primarily the ones in Benghazi — the US ambassador to Libya said ‘[Dignity’s] enemies are our enemies’. Dignity also receives weapons and air back-up from America’s allies of Egypt and the UAE, most likely with America’s approval. Having created the conditions for instability, outside forces now deepen that instability through pushing their preferred Libyan element to push into Benghazi and then after than onwards to Tripoli.

So, this is Cameron’s ‘happy place’. This is the humanitarian interventionists’ latest humanitarian achievement: a torn-assunder nation in which thousands are dying and millions are fleeing. If your ‘humanitarianism’ creates such spectacular humanitarian crises, you need urgently to rethink everything about your life. And it isn’t only Cameron: 557 MPs voted for his Libya campaign, with only 13 rejecting it – so all the parties backed the bombing. Both the right-wing and liberal media backed him, too — the former hoping this would be the Tories’ ‘Blair in Kosovo’ moment, the latter believing we were seeing a return to what they view as the pre-Iraq, pre-Bush ‘good wars’ which, in the words of the Guardian, mean it is often ‘right to intervene in the affairs of a sovereign state’. All these people, all these nodding MPs and iPad imperialists, have big, bloody questions to answer.

But they aren’t answering them. Or even asking them. This is perhaps the most shocking thing about the Libya disaster: the lack of debate, its glaring absence from the pre-election discussion. To plummet a country into a nightmare of war and exodus is bad enough — to fail to take responsibility for having done so is worse. This unwillingness to reckon, to discuss, to admit, cuts to the immoral heart of ‘humanitarian interventionism’. Such meddling is driven, not by realpolitik or clear, self-interested geopolitical aims, but by narcissism, a need among both Western politicians and observers for some momentum in this era of otherwise flat politics and unstable public life. With domestic public life increasingly bereft of the old certainties, and even of any accepted view of what’s right and wrong, many in the West seek to perform big, meaningful politics on the rubble-strewn stage of other people’s conflicts — ‘we intervene not to save others, but to save ourselves’, as Michael Ignatieff put it. And when that’s the driving force — the short-term need for a moral thrill among at-sea Western observers, not any longer-term plan for reorganising foreign affairs to old-style Western interests — then no reckoning is necessary, or even possible. For in terms of providing the iPad imperialists of the West with some momentary meaning, a brief ‘happy place’, the attack on Libya was, perversely, a success.

For spiked, the problem with such ‘humanitarianism’ is that it’s the polar opposite of humanism. Humanism recognises that people, being conscious agents of change, subjective actors, have it within their power to transform their circumstances and create new, better, democratic nations; indeed, democracy is precisely something that a people creates for itself, in the very act of fighting for and designing it. ‘Humanitarianism’, in stark, bloody contrast, treats people not as the subjects of history but as the objects of misfortune, battered beings in need of saving by outsiders. It reduces them to the geopolitical equivalent of those white-furred seals requiring rescue from the hunter’s club. It’s paternalistic, anti-human, and far from saving the objects of its globe-trotting pity it condemns them to yet more war and illiberalism, as in Libya. It has dire, barbaric consequences that we should be talking about. Forget the NHS, the tax-dodging controversy, and all the small-fry stuff — if you want to punish Cameron, punish him for this, for destroying a country, condemning its inhabitants to live in chaos, and then not even having the moral backbone to talk about it.