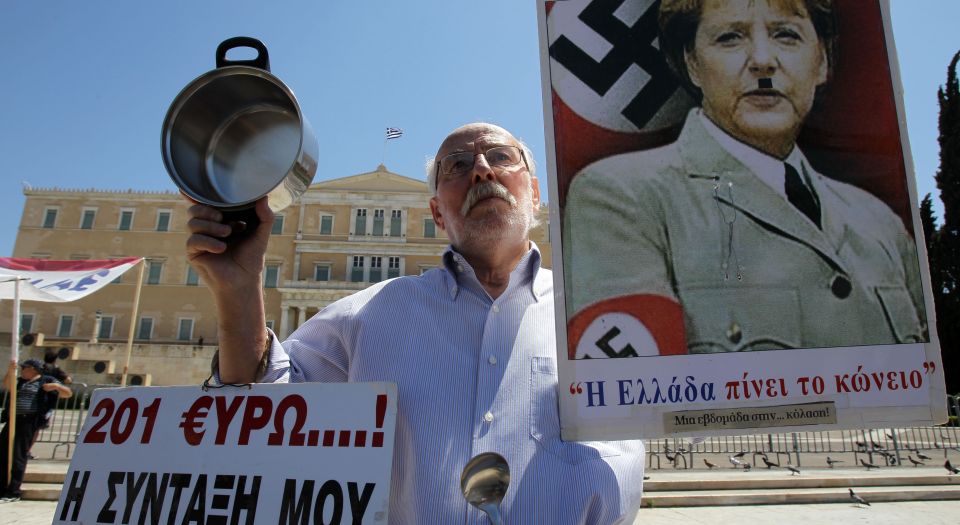 ‘I can’t overlook what is an ethical duty, a duty to history… to lay claim to the wartime debt.’ Greek prime minister Alexis Tsipras’s decision to ask Germany for billions of Euros worth of reparations for events during the Second World War may have been a political stunt, but it shows he knows his Europe-wide audience. He played on the prevailing anti-German narrative. That’s the one in which Germany, the dominant, bullying presence in the EU, is set on sucking the economic and political life out of its Eurozone subalterns; the one in which Germany, as George Soros put it a couple of years ago, ‘is seen as an imperial power that will not be loved or admired by the rest, but hated and resisted’. It’s the story, in other words, in which Germany’s twentieth-century ignominy still looms large

Not for nothing have Greek protesters dressed up as Nazis and strutted their anti-Troika message through Athens in recent years. Because that is how contemporary European history is supposedly being repeated – as a farcically sinister re-enactment of Germany’s past. The systematic barbarism of Nazism may be absent this time – Germany is keener on imposing austerity across Europe, rather than racial hygiene. But too many are willing to assume a continuity. Germany remains the conquesting, domineering presence of old, bending other nations to its iron will. As the left-leaning UK magazine the New Statesman put it in 2012, Germany’s chancellor Angela Merkel is ‘the most dangerous German leader since Hitler’. Or as Ulrich Beck remarked a year later, ‘Germany is a political monster’.

And there is, of course, some truth to this view of Germany. In the context of the EU and the Eurozone, Germany is now the dominant state. It is the most powerful economically, and increasingly, politically. As such, as the leading nation in the Eurozone, it has sought to manage the crisis in its own interests, enforcing austerity on the periphery, with Greece the most prominent example, in order to maintain a degree of economic stability at the centre. The cost hasn’t just been monetary: it’s been political. From Greece to Ireland, democracy has repeatedly come second to the interests of an EU elite in which Germany plays a key role.

So Germany’s role is problematic. But then, the EU itself is a product of what some still call the German problem. Remember, the EU’s postwar precursor, the European Coal and Steel Community, was established to rein Germany in, and immerse it in supranational structures, and thereby neuter it – an outcome aided by Germany’s postwar division into East and West. Even the Euro itself was the result of European and, in particular, French anxiety about the threat of a re-unified Germany, which economically and culturally was still the powerhouse at the centre of the continent. The price Germany had to pay for reunification in the early 1990s, exacted by then French president Francois Mitterand, was being bound to a single European currency, and, in effect, deeper trans-Europe political and economic structures. But, as we now can see, the problem of Germany’s economic and cultural sway in the context of a weak Europe has not gone away; it has simply re-emerged in a new, Eurozoned form.

So there are serious questions to be asked here: questions about Europe-wide economic stagnation, about EU-denied democracy, and, yes, about the role of Germany. And these are questions that spiked has never stopped trying to answer, from our defence of the Greek and Irish people’s democratic rights to our interrogation of Germany’s position at the centre of the EU.

So an honest, sober political debate needs to be had, a debate about the very meaning and purpose of the structures of the EU. But the debate we are too often seeing right now, in which Germany is characterised as little more than a fancy-dress-shop version of its 1930s self, is not that debate. It prevents that debate. It allows too many to settle on the simplistic story of bad Germans doing bad things to poor Greeks or Spaniards, or whoever is next up as Germany’s victim of the month.

This is captured by a typically shrill column from one of the most vocal of Syriza’s hangers-on. This UK-based columnist began by asserting that ‘Angela Merkel is the most monstrous western European leader of this generation’, before likening ‘the EU’s high priests of austerity’ to Charlie Chaplin’s The Great Dictator. That is how Merkel is seen by the historically shallow – on a par with Hitler and Stalin. Even those less inclined to hysterical analogy can’t resist the demonisation of Germany. As an observer writes in the Guardian: ‘Germany is eating itself over Greece. It is eroding its moral authority, and seems prepared to destroy the Eurozone’s integrity just to make a point.’ Writing in the Washington Post, another commentator asserts that Germany’s policies are ‘more destructive and dangerous than those of any other nation’.

Given the prevalence of such Germany-blaming sentiment in the so-called respectable Western press, is it any wonder that the likes of Syriza play the Nazi card to the gallery? Tsipras and pals know it will get applause. They also know blaming Germany will get them off the hook, just as it got other national elites, from Ireland to Spain, off the hook. After all, there’s no need to take responsibility for not facing up to the problems of fostering a debt-fuelled credit boom when the blame for the death of the Celtic Tiger or the explosion of the Greek economic myth can be laid at the Great Dictator Merkel’s feet.

But like the original outbreak of fearful anti-German sentiment in Europe at the end of the nineteenth century, be it Edwardian ideas of Germany’s ‘hidden hand’ in England or the Dreyfus Affair in France, today’s updated version, in which Germany is still behind everything wrong in the world, mystifies and exaggerates the real problems. Because it is those we need to face up to, from a stagnant, unbalanced economy to the democracy-evading impulse of the EU. Bashing Germany is not just cynical; it’s a fatal distraction.