Bitter Lake: searching for meaning in the Afghan abyss

Adam Curtis’s latest is a Heart of Darkness for the post-9/11 era. 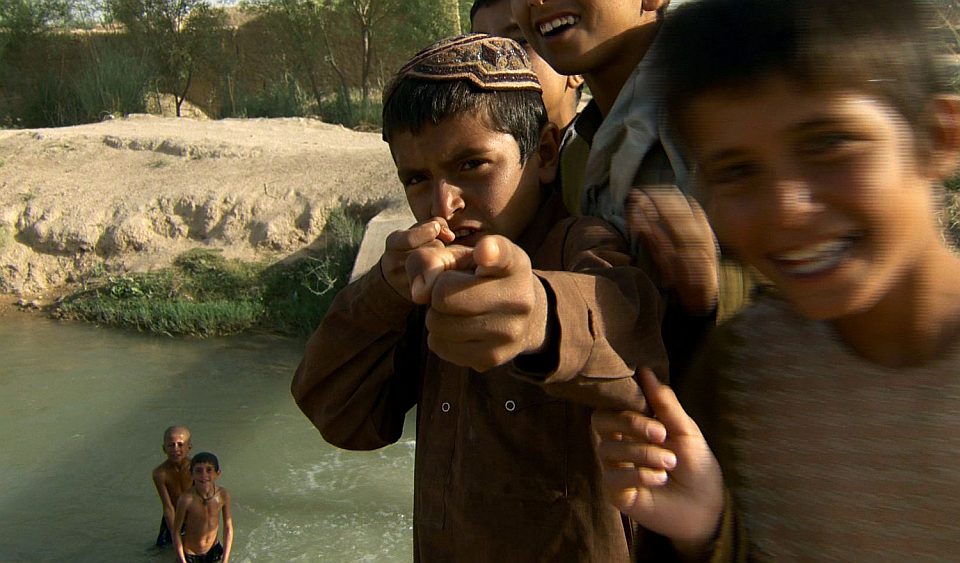 So shouts a disabled Russian serviceman to a woman who has asked him to stop his ranting and raving about the Afghan War of the 1980s on a subway train. The scene appears halfway through award-winning BBC filmmaker Adam Curtis’s latest piece, Bitter Lake. Afghanistan was the Soviet Union’s heart of darkness – the place where a crumbling empire sought to rediscover a last gasp of purpose. More recently it was the West’s apocalypse now.

The film, lasting over two hours and only officially available on BBC iPlayer, is ostensibly a search for the meaning of the absence of meaning that afflicts contemporary Western society. It is told through the prism of the West’s engagements with Afghanistan – specifically Helmand Province – over a 60-year period, as mediated by relations with Saudi Arabia and occasionally reaching back as far as the Anglo-Afghan wars of the nineteenth century.

As with all of Curtis’s work, certain aspects beg contestation and clarification. ‘Those in power tell stories to help us make sense of the complexity of reality. But those stories are increasingly unconvincing and hollow’, he begins, seemingly unabashed at the single narrative he, too, is about to tell. But while replete with contradiction, he does have a point. Authorities increasingly talk of the need for narratives today – unaware, it would seem, of the need for material and ideological drivers that might determine such narratives.

It is the first Saudi monarch, Ibn Saud, whose machinations serve as the start for Curtis’s narrative. According to this tale, Ibn Saud was supposedly involved in hoodwinking an ailing President Roosevelt in the closing days of the Second World War. Roosevelt was allegedly tricked into turning a blind eye to the Kingdom of Saud’s religious radicals in return for Saudi oil. The negotiations, held on the USS Quincy at Great Bitter Lake on the Suez Canal, provide both the film’s title and the deus ex machina for its plot.

A smug Saudi oil minister, Sheikh Yamani, then lectures the West on the need to get used to the new normal in the aftermath of the 1973 oil-price hike designed, in part, to chill American support for Israel. The glut of petrodollars that ensued had to find a new home, and it is here that Curtis’s second bête noir – international investment bankers – comes in. The funds were invested primarily in armaments, a ruse to support ailing Western economies. And the weapons produced were sold back to the same Arab leaders who needed to keep their neighbours and domestic populations in check.

So far, so simple. Except that surely Curtis, too, is eliding the odd complexity here?

Because two years before the oil crisis of 1973, the US had unilaterally terminated the convertibility of the dollar to gold, thereby ending the Bretton Woods agreement on monetary management and injecting considerable uncertainty into the markets – including the oil market. This, in turn, had been driven by the relentless printing of dollar bills to fund the Vietnam War and – more significantly – by the steady exhaustion of the US economy in the aftermath of the postwar boom. Unable to invest at home, capital was flooding overseas. Dubious allies were a consequence, not a cause, of America’s economic woe.

But the tendency for the rate of profit to fall never seems to make as good box office as bloody Arabs and greedy bankers. Fortunately though, Curtis does note the extent to which the bankers were then encouraged in their profligacy by Western leaders desperate to make ends meet and devoid of any political vision or agenda. But those leaders largely escape judgment in Bitter Lake.

It is probably Curtis’s bleakest vision yet, punctuated by a typically insistent soundtrack, new musical additions and copious quantities of silence. Images are made to speak for themselves – a drop of blood working its way down a camera lens, a terribly injured Afghan girl dressed up by her father as a princess with a tiara to meet the press, and a scene lasting over two minutes of a fully-kitted soldier picking up and stroking a somewhat ragged-looking dove. Such footage would usually have been left on the cutting-room floor. You wonder what Nietzsche would have made of the scene in which the squaddie stares increasingly meaningfully into the dove’s eyes.

Atrocities abound – some young Afghans unselfconsciously confirm their part in the stoning of prisoners, and US Marines joke about the number of unofficial rounds, including fatal ones, they have fired. But only the most naive or innocent would be shocked by these tales. As to the inevitable question as to what the overall montage means, surely the right response is to point to the total absence of purpose or meaning in the Afghan War itself.

The overall effect of the film is both disorienting and dispiriting. How did the West come to abandon its 1950s-era optimism, when it wanted to construct dams in Helmand to help build a modern state? Why did it opt instead to chase shadows (a British Army captain admits to defining any opposition as ‘the Taliban’)? A crisis of nerve, built on the inability to define and develop a new project for humanity in the shadow of political and economic exhaustion, was the real answer here.

By the 1970s, rich, hippy kids were travelling from the West to Afghanistan in search of authenticity. It spoke volumes about their inability to find meaning domestically, and more so of the failure of Western elites to promote a purpose for them. A decade later, when wealthy US socialites like Joanne Herring were sent to Afghanistan to connect with the Mujahideen, her Orientalist fantasies about saving ‘these people who believed so much in their God’ sound as shallow and libidinal as those of Joan Sims in Carry On Up the Khyber, which Curtis uses clips from.

Repeating one of my contributions to his 2004 three-part, BAFTA award-winning TV documentary series, The Power of Nightmares, Curtis notes how we in the West no longer believe in anything anymore. It is to compensate for this that thousands of young people in the West now seek to find meaning in Islam – with some embracing particularly backward versions of it. But it was really 40 years earlier that the rot set in, as the sons and daughters of the well-to-do paved the way for today’s Islamist meaning-seekers with their own hippy-ish escapism.

It may well be – like the Russian soldier railing on the subway – that elements of the Afghan abyss will come back to stare into us here. But, as in Joseph Conrad’s Heart of Darkness, it seems more likely that it is we who will have ended up exporting our confusions over there.

Along with the army of security consultants, legal advisers and civil-society reformers who fleeced the fledgling Afghan state of its funds in recent years, the West also sent some ‘experts’ to improve Afghans’ wellbeing and culture. So it is that the abiding image of the film for me is that of an English art teacher enthusiastically extolling the meaning of Marcel Duchamp’s conceptual artwork, Fountain, an inverted male urinal, to a group of recently liberated and incredulous Afghan women.