Boris: the only Brit allowed to point a gun at the Islamic State

Pretending to fight IS is fine – actually doing it apparently isn't. 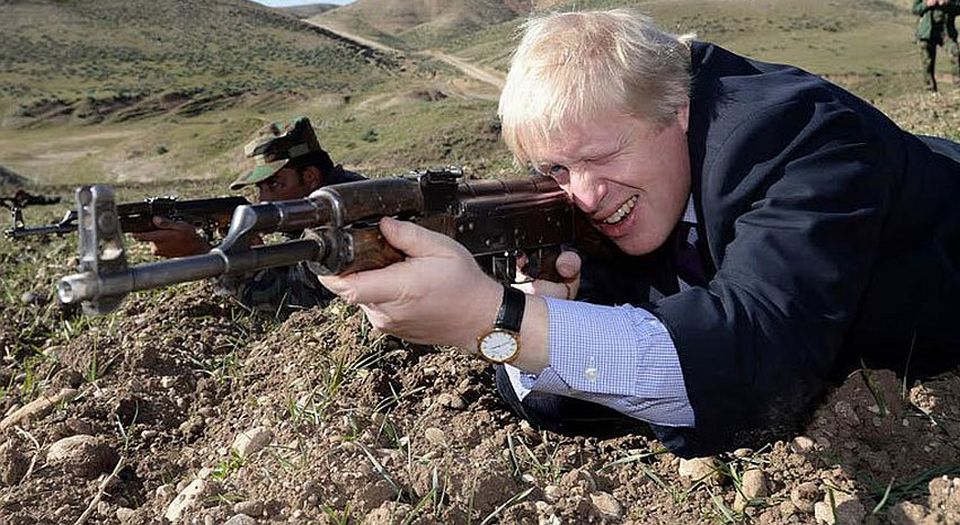 If you’re a Brit and you’re planning on taking up guns against the Islamic State, make sure you have blonde hair, a suit and tie, and that your gun-pointing at IS forces is an ironic photo op — everyone will lap it up. Don’t, whatever you do, be a Kurdish teenager from north London who takes aim at IS actually to try to kill some of them, and in the process to protect Kurdish life and liberty, for then you risk being treated as a criminal.

That’s the lesson from the past week. Today, the media and Twitter have gone into meltdown over some staged photos of everyone’s favourite buffoon, the London mayor Boris Johnson, looking down the barrel of an AK47 during his visit to Erbil in Iraqi Kurdistan. One newspaper has even launched a caption competition. Maybe he’s saying, ‘Haven’t used an AK47 since Eton’, says one hilarious wag. Yet a few days ago, an 18-year-old woman of Kurdish descent from Highbury in north London — patronisingly referred to in media coverage as a ‘London schoolgirl’ — was arrested after arriving back from a visit to Syrian Kurdistan, on suspicion of having done what BoJo only pretended to do: take up arms against the Islamic State.

Silhan Ozcelik left London in October. According to her family, she travelled to Syrian Kurdistan to volunteer as a humanitarian worker for the beleaguered Kurds, but the British authorities suspect her of having trained with an all-female Kurdish military wing to do battle with IS forces. To which the only response, if this were proven to be true, would be: so what? Or actually: good on her. Silhan is said to have called her family in November and told them ‘forget about me’. A family friend at the time said that ‘seeing the attacks on [Kurdish] women and children could have been the final thing to make her go’. It remains to be seen why she has now come back, and whether she did indeed fight alongside Kurdish women or just did humanitarian work, but her arrest at Stansted, followed by her being bailed, is bizarre: the British authorities insist the Islamic State is wicked and must be defeated yet arrest and interrogate citizens who (allegedly) try to help defeat it.

The Boris / Silhan contradiction captures something of the schizophrenia of Britain’s attitude to the Islamic State. On the one hand, British politicians tell us IS is evil and dangerous, a threat not only to Kurds, Iraqis and Syrians but also to the West itself; yet on the other hand they don’t want to commit a massive amount to the fight against it. Certainly they don’t want anyone from Britain to risk life or limb in this apparent civilisational war between a progressive West and a backward gang taking over chunks of Syria and Iraq. So while Boris is talking trade deals with the Iraqi Kurds, and Cameron has okayed the despatch of British troops to help train Kurdish forces, they also make it clear that no Brit will take any big risk in the battle against IS. As Cameron said at the end of last year, ‘we should act — but act differently’. By which he meant, no boots on the ground, no all-out war, no long-term commitment — just some training for Kurds and a few airstrikes in the hope this might usher IS off the global stage. And this means, bizarrely, that Brits who do put their boots on the ground to fight IS risk being arrested.

Unlike Cameron and Co, Silhan Ozcelik had the courage of her convictions — whether those convictions were to do humanitarian work for the Kurds or to wage war on IS. And now she’s under investigation. But as her brother said, ‘I think she’s a good example to many young people, doing something good for the world’. He was talking about what he insists was her humanitarian work — but his words would still stand if she really had fought with Kurdish women against IS.