Paris and beyond: Europe is at war with itself

What lies behind the so-called Islamisation of Europe. 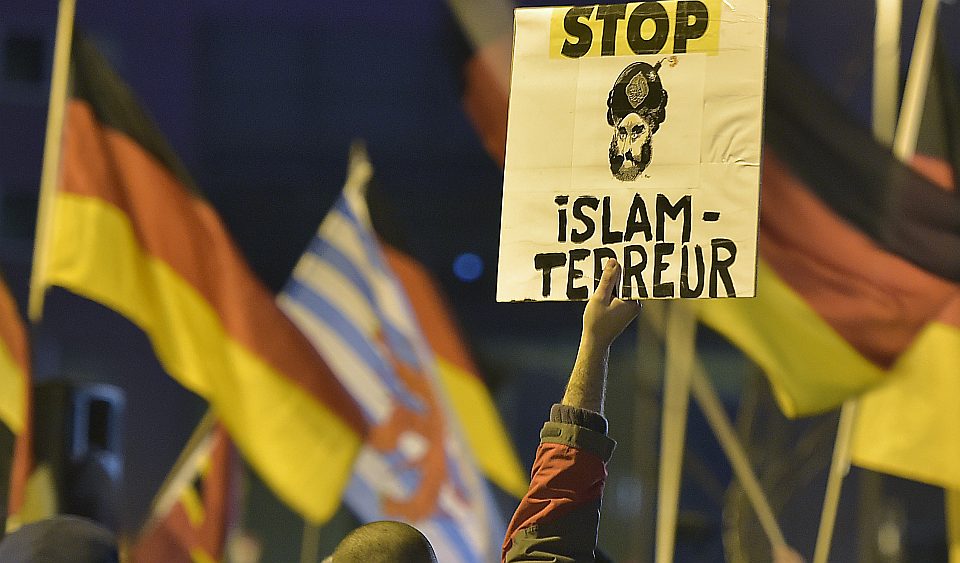 Across Europe, the spontaneous demonstrations of solidarity with the victims of the Charlie Hebdo massacre show that people intuitively understand that something more is at stake than the tragic loss of 12 lives – people also feel that a fundamental part of their lives is under threat. It is clear, however, that the French and Europeans more widely are struggling to put into words the object of their anxiety.

It is not just the man on the street having difficulty making sense of this awful event. Political leaders and commentators are also finding it hard, and appear confused and evasive. To the question of who was responsible, news outlets have opted to speculate about the role of exotic foreign connections. Yemen, Syria, even Pakistan have all been mentioned as places where the plot may have been hatched. Some point the finger of blame at al-Qaeda. Others insist it was the Islamic State (IS). And the killers are cast as highly trained, disciplined soldiers with considerable experience on the battlefield. Although the narrative about the killers is still developing, reports increasingly suggest that it was a threat that came from ‘over there’.

But the real threat is not from ‘over there’. The killers spoke perfect French. They were familiar with the streets of Paris. And, given that they are yet to be caught, they certainly knew where to flee and find refuge. Yes, they may have spent time in the Middle East but they are as much a product of French society as were the people they murdered.

France, like many West European societies, finds it difficult publicly to acknowledge the fact that millions of its citizens feel estranged from the cultural traditions and way of life of their homeland. That in some cases this estrangement has crystallised into loathing and hatred for La Patrie is even more difficult to admit – especially in public. As a result, European leaders choose to dodge, externalise or dismiss the question of why so many feel alienated from their own societies.

The official response to such domestic hostility towards European society and culture is to say, ‘Let’s not talk about it’. This is because officialdom fears that an open discussion of the cultural threat facing European society would only strengthen support for both radical Islamists and right-wing nationalists. That’s the main reason there was so little discussion of the implications of an ICM poll that showed 16 per cent of French citizens had a positive assessment of IS – among 18- to 24-year-olds, this rose to 27 per cent. The poll also revealed that seven per cent of British and German citizens supported IS.

Of course, opinion polls are often unreliable and tell only part of the story. But it only takes a few chats with young Muslims to grasp their psychic distance from the way of life of their host societies. In some cases, this distance has turned into hostility and hatred. Policymakers and commentators often try to blame this emergent hostility on the influence of jihadist websites and other Islamist organisations operating in the Middle East or Asia. But the problem is not really from ‘over there’. Rather, the appeal of anti-Western sentiments to many young European Muslims represents society’s failure to socialise these young people.

And why is society increasingly unable to socialise sections of its youth? Because it has lost confidence in the intellectual and moral legacy of European society. This is why schools have difficulty teaching Enlightenment values to some of their Muslim pupils. French historian Georges Benoussan noted that, in the 1990s, ‘teachers began to encounter verbal violence while trying to teach the Holocaust in schools with large concentrations of North African students’. Benoussan said ‘students would stop the teachers and say, “This is an invention”. I know of cases in which the teacher mentioned Auschwitz and Treblinka, and students clapped.’ (1)

That relatively young pupils already held a counter-narrative to French society’s version of the recent past shows that France is conflicted from within. But rather than face up to the problem, the French establishment has decided to evade it. Consequently, many more youngsters now clap their hands at the mention of Auschwitz.

British schools have followed the path of their French counterparts. A report published in the aftermath of the race-related disturbances in Bradford in 2001 found that ‘some teachers in Bradford consider the Holocaust to be a difficult subject to approach with Muslim pupils’. The Historical Association’s report, Teaching Emotive and Controversial History, even gave the example of a ‘history department in a northern city’ which ‘avoided selecting the Holocaust as a topic for GCSE coursework for fear of confronting anti-Semitic sentiment and Holocaust denial among some Muslim pupils’. It also mentioned another history department in which ‘the Holocaust was taught despite anti-Semitic sentiment among some pupils’. However, the same department deliberately avoided teaching the Crusades at Key Stage 3 because teachers’ ‘balanced treatment of the topic would have directly challenged what was taught in some local mosques’.

These reports show that too often schools are reluctant to challenge the cultural and ideological attitudes of Muslim pupils. The very fact that even a ‘balanced’ treatment of the Crusades is avoided so as not to offend cultural sensitivities highlights the defensive moral and intellectual climate that pervades European schools. If a discussion of the Holocaust can be evaded, what other subjects are likely to be open to negotiation? What these reports also suggest is that secular schools have lost confidence in their own values. They are no longer prepared to engage with the battle of ideas that is silently raging in their society.

Yet despite the official silence on such profound cultural antagonisms, many people are aware that something is not quite right. And in the absence of a grown-up public discussion of our culturally divided society, most people are lost for words. Too often, reactions to the threat of radical jihadists assume a simplistic apocalyptic form. Last year, the publication of Le Suicide Francais by Eric Zemmour, which suggested French society and culture faced annihilation, touched a raw nerve. Over-the-top and scaremongering, Zemmour’s book was typical of the way in which the threat to French culture tends to be expressed. Michel Houellebecq’s recently published novel, Submission, is similar in attitude to Le Suicide Francais. It imagines France in the future as an Islamised nation that has lost touch with its Enlightenment values.

In Germany, a new ‘anti-Islamisation’ protest movement, Patriotic Europeans Against the Islamisation of the West (PEGIDA), has emerged in response to public fears about militant Islamic groups. PEGIDA’s claim that the future of Germany and the West is Islamic has prompted a great deal of public attention. That the projection into the future of an Islamic Europe excites so many people’s imaginations exposes deep insecurities about the meaning of Germany’s way of life. PEGIDA’s founder, Lutz Bachmann, even invokes the tradition of humanism and the Enlightenment.

PEGIDA is an inevitable reaction to the absence of sensible debate on Islam and European society. It seems that the official silence has only encouraged uncertainty, confusion and fearful dramatisations of the threat of radical Islam. Europe is simply lost for words when it comes to making sense of the threat it faces.

The idea of the Islamisation of Europe is just as evasive as the official rhetoric of multiculturalism. The real threat facing Europe is not that of an external force or the irresistible attraction of Islam. The real problem is that the political and cultural elites of Europe are struggling to give contemporary meaning to their cultural and historical legacy. Europe’s embrace of multiculturalism has been inspired by a variety of different calculations. However, its principal driver has been European societies’ difficulty in providing their ways of life with positive and forward-looking values. Opting for the ‘multi’ has spared governments the difficult task of elaborating and upholding a common foundation for communal life.

Multiculturalism, then, has served as a form of political evasion. But it has also encouraged the destructive process of cultural segregation. Such segregation means that dialogue now only takes place within parallel communities. Not surprisingly, young people growing up within a community that is relatively untouched by the values of officialdom will have their views and prejudices affirmed and echoed by others. The pool of knowledge on which millions of young Muslims now draw is very different to that of other communities. But the emergence of views that run counter to those of the host society is rarely noticed by the media because there is no dialogue that transcends the multicultural divide.

The sentiments that drove thousands of European youths to fight in Syria have been produced by confusions and tensions generated in Europe. Opinion polls indicate that IS is supported by a far higher percentage of young Muslims in France and other parts of Europe than in the Middle East. That shows that the source of anti-Western sentiments should be located in Europe, not ‘over there’.

The chain of events that led to the massacre in Paris may well have been sparked off by a classroom discussion in the banlieus of Paris or Marseilles. Some pupils were no doubt certain that the Holocaust was a myth. And the defensive way their teachers dealt with their points would only have strengthened their conviction, itself informed by their older peers at home. Throughout their teenage years, their alienation from French society would have gained in force. They then encountered radical Islam, a medium to express their alienation, and the rest is history. But if Europe wakes up, this won’t necessarily be the future.