Tommy the chimp is just an animal, not a prisoner

The campaign to give a chimpanzee ‘legal personhood’ is ludicrous. 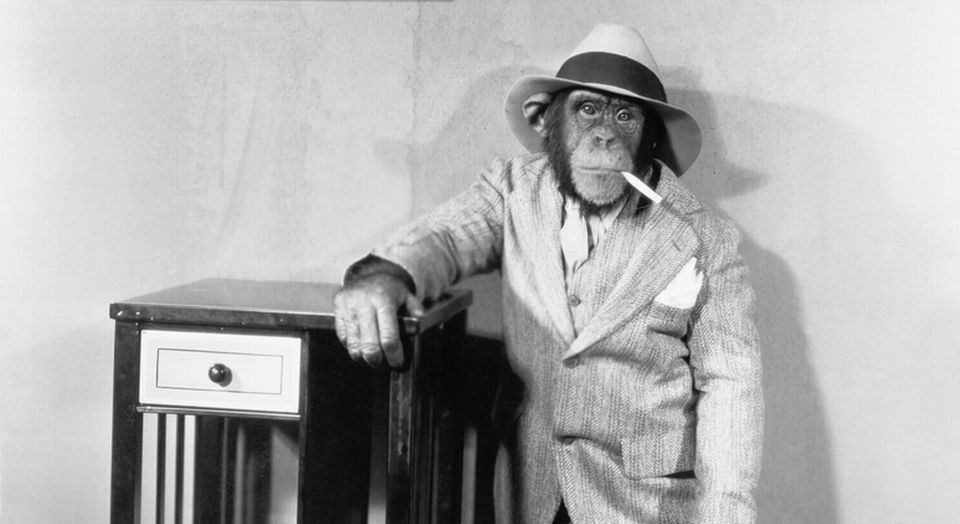 A New York appeals court is currently being asked to consider whether a 26-year-old chimpanzee should be entitled to ‘legal personhood’. Tommy, a retired circus performer living in a cage in upstate New York, is represented by lawyer Steven Wise of the Nonhuman Rights Project (NhRP). The NhRP’s argument is that animals with ‘human qualities’, such as chimps, should have basic rights – including freedom from imprisonment.

One such ‘human quality’ that the NhRP highlights is apes’ purported capacity to empathise. Research by scientists at the University of Amsterdam shows that ‘both chimpanzees’ and humans’ eyes mimic the pupil dilation of the images they were shown’. But is this really evidence of empathy? There is a world of difference between an instinctual connection between organisms and an ability to identify with and understand another’s situation, feelings, and motives. There is no convincing research that demonstrates any species apart from human beings is able to understand the mental states of others. We continually reflect on the internal life of other humans. Through poetry, literature, music and other works of art we attempt to explore and make sense of the emotions, motives and intentions of our fellows. If one reduces everything to its simplest form – such as the involuntary matching of another individual’s pupil size – then one can, of course, find parallels between humans and other animals. But this kind of philistinism does not deepen our understanding of human beings, or indeed animals.

As I argue in my book, Just Another Ape?, science has provided strong evidence that the differences in language, tool-use, self-awareness and insight between apes and humans are vast. A human child, even as young as two years of age, is head-and-shoulders above any ape intellectually. The claim that apes are cognitively more advanced than other animals is also questionable. Much has been made of chimps’ tool-using abilities, but recent discoveries show that the tool-making and tool-use of some birds equals, or in many cases betters, anything observed in chimpanzees. So should we therefore be granting the ‘right of personhood’ to birds as well?

Of course we shouldn’t. Birds, like apes, would be incapable of exercising those rights. Rights have been fought for by humans throughout our recent history. They are premised on the idea that autonomous individuals should have a say in how they live their lives, how society is organised and who should be treated as equals before the law. Animals are not capable of taking responsibility for their own actions, never mind having a say in how society is run. And they cannot consciously subordinate their individual natural drives and needs to the interests of society as a whole.

Granted, the NhRP is not asking the New York courts to grant chimpanzees ‘full human rights’. Rather, it is arguing for Tommy to be given the right not to be imprisoned against his will (quite how it knows Tommy’s ‘will’ escapes me). On its website, the NhRP outlines its mission ‘to change the common law status of at least some nonhuman animals from mere “things”, which lack the capacity to possess any legal right, to “persons”, who possess such fundamental rights as bodily integrity and bodily liberty’.

So is it proposing that Tommy should be given ‘bodily liberty’ and be set free? Well, not quite. The NhRP proposes to move Tommy from the cage he currently inhabits to a chimp sanctuary in Florida – where, of course, he would not be at liberty to come and go as he pleases. As one of the panel of judges quite rightly asked Wise: ‘Aren’t you asking that Tommy go from one form of confinement to another?’ The long and the short of it is that Tommy would still be held in captivity – albeit in ‘a condition that is as close to the wild as is possible in North America’. A move from a cage to an outdoor sanctuary cannot, by any stretch of the imagination, be described as providing a ‘fundamental right’ of ‘bodily integrity and bodily liberty’.

Really what this case boils down to is the quality of Tommy’s living conditions. Patrick Lavery, Tommy’s owner, has insisted that the chimp is comfortable in his environment – ‘a spacious $150,000 facility with a door to an outside area’. Wise, however, repeatedly refers to Tommy as living in ‘solitary confinement’. Whether it would be better to move Tommy to the sanctuary is open to debate. But arguing that Tommy should be entitled to ‘legal personhood’ and ‘bodily liberty’ is a no-brainer – rights are something that only humans can understand and exercise.

Helene Guldberg is author of Just Another Ape?. Visit her website here.