The Cold War organisation’s crisis of purpose is playing itself out in Ukraine. 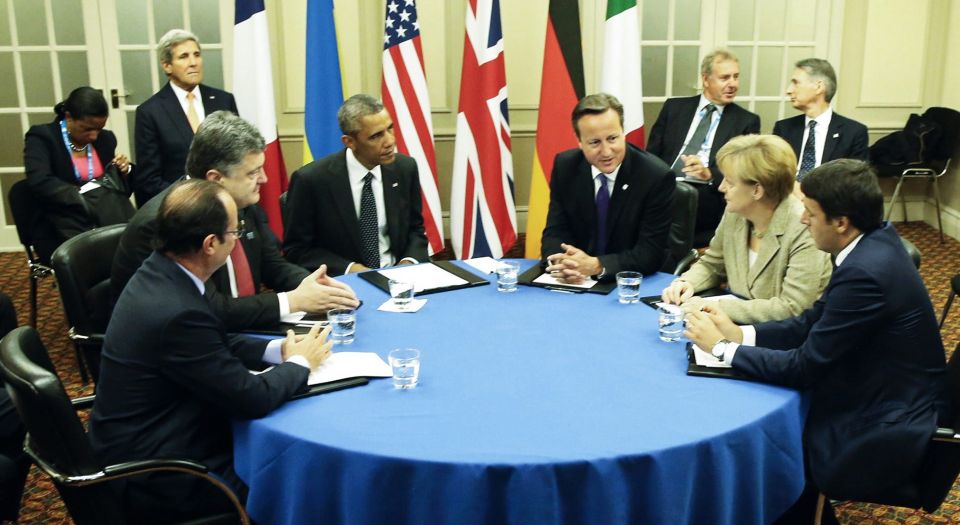 Ukrainian prime minister Arseniy Yatseniuk, speaking as fighting continues in eastern Ukraine despite the putative ceasefire, clearly knows his audience in the West. ‘[Russian president Vladimir Putin’s] aim is not just to take Donetsk and Lugansk’, he said at the weekend. ‘His goal is to take the entire Ukraine… Russia is a threat to the global order and to the security of Europe.’ This, you see, is the familiar narrative of the conflict propagated in the US and Western Europe: namely that Ukraine is a victim of Russia’s grand imperial designs, of Putin’s desire to resurrect a Russian empire to rival the Soviet version to which he remains stubbornly, fatally in thrall. As one US magazine put it, ‘the Empire strikes back‘.

But these dark-ish, Star Wars-inspired imaginings couldn’t be more misleading. It’s not Russia’s delusions of empire that are the problem here; rather it’s the confusion of that Western remnant of US imperialism, NATO, that has helped foment the conflict in Ukraine. Ever expanding its membership eastwards towards the Russian border, showing a willingness to intervene in territories picked almost at random, from Kosovo to Afghanistan, and regularly announcing its intention to ‘promote’ security and stability throughout ‘the globe’, NATO has acted increasingly provocatively and recklessly towards Russia. And what’s more, it has done so not because it has a clear strategy to ‘encircle’ the old enemy, as some critical commentators have speculated; rather, its two-decades’ worth of hyperactivity is born of a crisis of purpose, an absence of strategy. Confused about its role, it has had to search for and invent one instead – a process that is now causing havoc in Ukraine.

Up until the 1990s, of course, the North Atlantic Treaty Organisation was far from confused. Established in 1949 to forge a cross-Atlantic military alliance between the US, Canada, the UK, France and eight other European states, its reason for being was clear: to contain the putative threat of the Soviet Union. Over the next 40-odd years, NATO’s role was defined by the Cold War it helped to frame. Consequently, it didn’t really do or change much during that period. Yes, West Germany joined in 1955. And France left in 1966. But that was about it. It didn’t try to enlarge itself to any great degree, and it didn’t launch any military action.

The fall of the Berlin Wall, and the end of the Cold War, changed things; it deprived NATO of its reason to be. Yet – and this is the twist – NATO continued to be. That is, after the end of the Cold War, after the demise of the threat it was ostensibly set up to ward off, it continued, as a military alliance in want of a purpose. Over the past 20 years, then, NATO, once a front for US interests, has become a front for working out what exactly US interests are. And as such, it has become a walking, shooting expression of the profound crisis of purpose that has gripped Western political elites since the demise of the Soviet Union.

Just look at NATO’s reckless, Russia-baiting development over the past couple of decades. When the Berlin Wall fell, and the Soviet Union finally disintegrated, NATO’s role was the subject of high-level talks between Western leaders and Russia. At the time, then Russian president Mikhail Gorbachev was insistent that ‘any extension of the zone of NATO is unacceptable’. From a Russian perspective this was understandable; it didn’t want the US and its allies rolling through the now-defunct Eastern bloc. Aware of Russian anxieties, and not wishing to provoke its long-time adversary, Western leaders agreed. Then US secretary of state James Baker told Gorbachev in 1990 that ‘there would be no extension of NATO’s jurisdiction for forces of NATO one inch to the east’. Hans-Dietrich Genscher, the West German foreign minister, went further and told his UK counterpart, Douglas Hurd, that NATO should issue a statement saying ‘NATO does not intend to expand its territory to the East’.

By the mid-1990s, however, NATO was not only still in existence – it seemed intent on doing exactly what its leading members had told Russia it was not going to do: expand eastwards. Speaking at his first NATO summit in 1994, US President Bill Clinton announced that ‘it was no longer a question of whether NATO would enlarge but how and when’. By 1997, Hungary, Poland and the Czech Republic had signed up, with Clinton continuing to insist: ‘The bottom line is clear: expanding NATO will enhance our security. It is the right thing to do.’

That last clause is telling: NATO, no longer an anti-Communist protectorate, was redefining its role along new, but vague lines – this was ‘the right thing to do’. NATO members still talked of the organisation’s role in terms of security, of safety, but the threats were now seen as nebulous and proliferating, and as such, demanded a more active, interventionist orientation. After all, if the ultimate objective is simply ‘security’, then for as long as there are threats, let alone the infamous unknown unknowns of Donald Rumsfeld, then there needs to be action. ‘We must not fail history’s challenge at this moment’, wrote Clinton in 1997, ‘to build a Europe [that is] peaceful, democratic, and undivided, allied with us to face new security threats of the new century – a Europe that will avoid repeating the darkest moments of the twentieth century and fulfil the brilliant possibilities of the twenty-first.’

So, fresh from interventions in the former Yugoslavia against the Bosnian Serbs in 1994, and then in Kosovo against Serbia in 1999, NATO continued its activist, expansionist trajectory. This wasn’t a surprise: NATO was no longer justifying itself on the grounds of protecting a limited group of nations against a definite, specific threat; it was justifying itself on the grounds of protecting a rapidly expanding group of nations against an unlimited, indefinite series of threats. Hot on the heels of the NATO invasion of Afghanistan, former Soviet satellites Lithuania, Latvia and Estonia were admitted in 2004, and, in 2009, Croatia and Albania joined.

It wasn’t a surprise when, in an interview in 2010, Ronald Asmus, a former US deputy assistant secretary of state for European affairs, voiced what many in the Kremlin already feared. ‘We should be investing more, we should be more present and active on the ground in Ukraine, in Georgia, and all these places’, he said, before adding, ‘without triggering the Russian hyper-reaction’. A 2012 strategy statement echoed Asmus’s sentiments: ‘[NATO’s] goal of a Europe whole and free, and sharing common values, would be best served by the eventual integration of all European countries that so desire into Euro-Atlantic structures.’ You don’t have to be Vladimir Putin to see the problem such a goal poses to Russia.

NATO’s development has been something of a paradox. When its role was clear, it did very little. But during the period in which its role has become increasingly unclear, indeed, during the period in which it has been confronted by its own obsolescence, it has done far too much. Expanding here, and intervening there, it is now, with its promise to integrate Ukraine, almost unwittingly provoking a conflict with Russia. After all, it is doing so not because it has concrete, material objectives, but because it is trying to answer vague, almost existential questions about its, and by association, the US-led West’s role in the world.

So at last week’s NATO summit in Wales, UK prime minister David Cameron even talked of the crises in Ukraine and Iraq as an opportunity to ‘reinvigorate and refocus’ the alliance. Continuing this rather introspective, navel-gazing theme, NATO secretary general Anders Fogh Rasmussen said that ‘Russia’s aggression against Ukraine is a wake-up call’, a prompt for NATO-allied nations ‘to reconsider defence investment because it’s now obvious that we cannot take our security for granted’. The immediate result of such feelgood posturing will be a 4,000-strong rapid-reaction force based in ‘Eastern Europe’ ‘to reassure existing members near Russia that the principle of collective defence remains sacrosanct’. So much for the ceasefire.

Having poked and prodded Russia for the past two decades, offering invitations to its one-time allies to join the West’s military club, it sometimes seems as if NATO is intent on reinvigorating that old Red-hued enmity. But that is to give NATO too much credit. It is NATO’s quest for its own purpose, which, having mutated into an unlimited, interminable demand for security and safety, has led it almost unthinkingly into a confrontation with Russia. It is blundering rather than belligerent; clueless rather than calculating. And that, in many ways, is far more dangerous.