And the fate of the Union rests with… Alistair Darling

So weak is the pro-Union side that all its hopes now rest on a political sad-case. 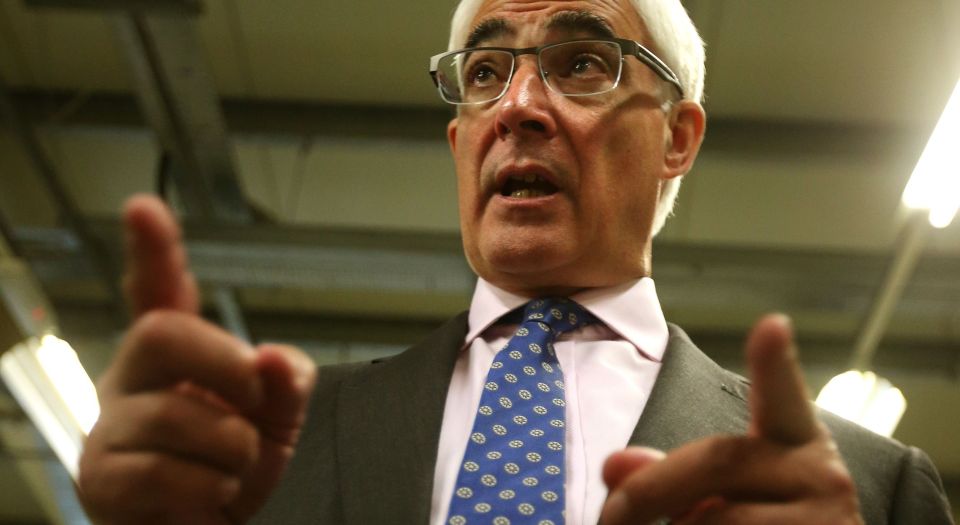 Even as UK chancellor of the exchequer during a period in which the economic excrement not only hit the fan but concealed its whereabouts, Alistair Darling never received the kind of attention he is now receiving. He may once have been just about holding the UK economy’s reins as the various financial services galloped into the debt-ridden present, but Darling was never the centre of national media attention to the extent he is now. But then again, perhaps his current role as chair of the pro-Union Better Together campaign merits the focus. After all, he is, to all intents and purposes, the man tasked with defeating the pro-Scottish independence side at this month’s referendum.

Just look at the volume of praise which came Darling’s way after he bested his arch-rival, Scotland’s first minister and leader of the Scottish independence campaign Alex Salmond, in the first televised debate between the two earlier this month. One pundit was moved to write that ‘the Union is not yet safe but it is safer than it has been at any previous point this year’. As many observers saw it, Darling, with his Big Book of Facts close by, was able to expose the shallow, ill-thought-through nature of the nationalists’ case. To Salmond’s appeal to Scottishness, and vague gestures to some sort of currency union with England (even if his side won the referendum), Darling responded with waspish putdowns, and grim, stat-packed prognoses for an independent Scotland’s future. Where Salmond appeared slightly clueless and light on substance, Darling seemed in-control and semi-authoritative. He had found the chink in the nationalists’ armour: that their case was based on little more than a feeling.

But on Monday, when the pair faced off again, Darling came off far worse against Salmond’s combination of belligerence and urbanity. The gnashing of teeth among the pro-Union commentariat was audible; Darling had let everyone down. ‘Darling, billed in the past as a solid if unflashy old pro, knew his lines, but the delivery was often poor’, wrote a Guardian columnist: ‘Curiously, the former chancellor’s strengths first time round (chiefly currency) appeared hackneyed and weak.’ In The Times, a similarly plaintive refrain sounded: ‘This, Mr Salmond said, is “our moment… our time”. A simple declaration of infinite possibility: “let us do it now.” It capped a forceful, winning performance by the first minister. By the end of the evening, Mr Darling’s repeated concentration on the risks of independence began to feel a little weary, a little frayed, a little stale.’

Others noted how ‘agitated’ Darling had become, how flappable this supposedly unflappable fellow now was. An academic in the Herald pointed out that Darling’s problem was that ‘he does not have the immediate instincts for solidarity and struggle which would have let him take advantage of the many open goals that Alex Salmond left’.

In effect, went the pro-Union advocate’s sigh, it’s not me, Darling, it’s you. You’re not charming enough, not popular enough, not politically good-looking enough. All of which must have been familiar music to Darling’s burning ears. As a ‘Tory source’ told the Daily Mail back in December, senior figures on the pro-Union side were anxious about Darling’s lacklustre campaign. ‘[Darling] is comatose most of the time’, whispered one source. Another senior parliamentary party figure chimed in, saying Darling was ‘useless’ and ‘not a very good communicator’.

Yet amid the focus on Darling, on his strengths and on his weaknesses, what no one seems to be asking is why he of all people has found himself in this position? Why are so many resting their hopes and fears on Darling’s slender shoulders? Yes, he’s the ‘chair’ of the Better Together campaign, but given this is a cross-party campaign group, supposedly drawing support from all three of the UK’s main parties, why is everything falling to Darling?

This, remember, is hardly an unimportant political debate. Later this month, Scottish residents will be voting on whether to dismantle the Union, and with it, 300-odd-years worth of state- and institution-building. They will be voting on whether to break-up something that for centuries has been an article of faith for Britain’s ruling class, and an idée fixe for the Tories in particular. As Margaret Thatcher proudly told devolutionists in 1979: ‘The United Kingdom as a whole is, and always will be, greater than the sum of its parts. Divided we are diminished, both individually and collectively.’

And yet, between the Union and its disintegration, the main political parties, many of which have been historically betrothed to the Union, have placed Darling. Which is really strikingly odd, when you think about it. Because the man upon whom the fate of the Union seemingly now rests, the man now standing almost alone against the opportunists north of the border, men like Salmond who are all too keen to take advantage of the British state’s evisceration is also something of a political sad case. He’s not a dweeb of Ed Miliband proportions, but, as his performance in this week’s debate showed, he’s up there in the awkward, voice-stuck-in-the-throat stakes. This, after all, is the man who was voted ‘Britain’s most boring politician’ – for two years running. This is the man whose main political claim to fame was being in situ as the economy began to crash in 2007, and not really realising anything was wrong until the Royal Bank of Scotland’s Fred the Shred paid him a night-time visit in 2008. And this is now the man standing between Union and disintegration. With defenders of the Union like this, who needs an independence movement?

And why has this happened? Why has Darling, a man who looks and acts as if he has just been struck by lightning, assumed the role of defender of the Union, the man to fight back the tide of identity-politics backwardness north of the border? Because everyone, be they Tory or Labour, has virtually withdrawn from the fray. They might talk fondly of the Union, they might invoke holidays to Scotland or highland flings, but they seem unwilling, when Salmond’s push comes to shove, to stick their heads above the parapet and make a strong, principled political case for the Union. Where are the leaders of the Labour Party with just a few weeks to go before the vote? Where, indeed, is UK prime minister David Cameron, the leader of the party most closely entwined with unionism? We know where he is, because the Tory press office let everyone know: he’s shuttling between London and Cornwall in a suspiciously warm wetsuit, and ‘didn’t have time’ to watch Monday’s debate. He might watch the highlights, apparently.

Alistair Darling is a weak ‘leader’ of the Union side. His arguments for the Union, which are really just arguments against independence, consist of little more than fearmongering about what might happen should the Scots vote ‘Yes’. Yet Darling, resplendent in his weakness and awkwardness, is more than that: he is a symbol of the British state’s inability to stand up for its own institutions. In Darling, the British elite’s own disintegration, its own lack of political verve, is writ large.