Sorting fact from fiction in Ferguson

Same old racism? Actually the riots show how much has changed in the US. 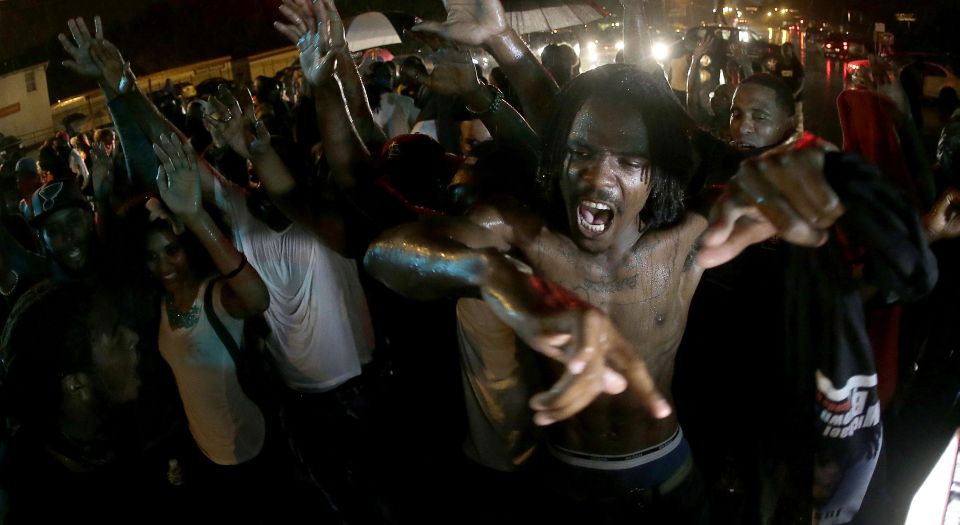 As I write, on Monday 18 August, the small American town of Ferguson, Missouri faces the prospect of another evening of protests, rioting, looting and battles with the police. Missouri’s governor, Jay Nixon, has lifted a midnight curfew, but has called in the state’s National Guard. Logically, this nightly ritual has to end, but right now it’s not clear when or how that will happen. Chaos reigns and there is concern that events could spiral further out of control.

As this story has become a leading news item both in the US and globally, many know that events in Ferguson were sparked by the police shooting of Michael Brown, an unarmed black teenager, on 9 August. The demonstrations that followed were largely peaceful, but were accompanied by rioting and looting. The police adopted a military-like response, with armoured vehicles, tear gas and rubber bullets, which swept up both rioters and protesters, and increased tensions further.

Many have sought to fit events in Ferguson into old, longstanding narratives. It’s America’s inherent racism, the continuation of slavery and Jim Crow, say some; it’s a criminal element run amok, say others. Neither of these ‘explanations’ are particularly insightful. If we’re honest, we’d admit that there is much that is unknown, and that there are aspects that are new and which challenge existing assumptions. We don’t know what exactly happened in that tragic confrontation between Darren Wilson, the police shooter, and Brown (and may never know). It also isn’t obvious why this incident led to rioting and heavy-handed police action, and why it has touched a national (and international) nerve. Rather than jump to conclusions, it would be better to pause and try to work out what is specific about today’s situation.

In that spirit, here are some provisional observations regarding the issues raised by events in Ferguson.

The focus on ‘militarisation’ misses the mark

The most commented-on feature of Ferguson has been its so-called ‘militarisation’. As many have noted, watching TV scenes of armed men in tank-like vehicles amid smoke and shots firing, viewers could be forgiven for mistaking Ferguson for a battlefield in Gaza or Ukraine. (But, in my view, actual news commentators who have claimed that Ferguson really is a war-like situation on a par with those in the Middle East or Eastern Europe should be spared no forgiveness.) The deployment of military-style gear is indeed striking and relatively new, and problematic. As recent reports have highlighted, much of this equipment was provided to towns by the federal government, and increased after 9/11, in the name of fighting terrorism.

‘Militarisation’ definitely has a ring of truth to it, and has the virtue of trying to identify a new feature. But on closer inspection, it really doesn’t hold up as an explanation or solution. The fact that US politicians from every perspective – from Republican Rand Paul to Democrat Claire McCaskill – have embraced the term ‘militarisation’ to describe the police response in Ferguson is a giveaway that this is an overly simplistic diagnosis. ‘Take the toys from the boys’ becomes the rallying cry, as if the hardware itself is behind the unrest in Ferguson, and, absent that, all would be fine. The fact is that policing in Ferguson is a problem not only because the police have used certain weapons, but also because they have treated citizens like an enemy. Pointing rifles at protesters is a problem, whether they are high-powered or regular ones. Banging on about ‘militarisation’ ultimately is a displacement activity that avoids having to confront more intractable issues.

Since the process of ‘militarisation’ has occurred in police units across the country, this concept doesn’t explain why conflict has specifically taken off in a place like Ferguson. For that, we might look more closely at the underlying social relations in the community. After all, as bad as the shooting of an unarmed teenager is in itself, it is not a given that such an incident would necessarily end in protests, rioting and charges of racism.

We’re used to hearing about unrest in cities, but what’s different is that Ferguson is a suburb. We’re also familiar with the story of ‘white flight’ from cities, but Ferguson is a case study in white flight from a suburb, which is a newer phenomenon. The change has been exceptionally rapid: in 1990, Ferguson was three-quarters white, but today it is about three-quarters black. The relatively recent arrival has meant that there are not many black civic organisations with deep roots. Moreover, blacks are not represented in positions of authority: the mayor and most politicians are white, and the police chief and all but three of 53 police officers are white.

Of course, demography is never destiny. In many towns across the US, irrespective of the ethnic composition, many people feel they don’t have a stake in their community or control over their personal fortunes. This often means that people are estranged from authority figures, and possibly in outright conflict when it comes to the police. In towns like Ferguson, where those in power are white and the majority is black, these everyday conflicts can more readily take a racial form. This does not mean that nothing has changed since the 1960s – Missouri is not a Jim Crow state, and there is a genuine desire from nearly all to see justice in cases like Michael Brown’s – but it does mean that racial tension persists, especially when it comes to the police.

The militarised approach stems from a position of weakness, not strength

When one sees the militarised police forces in Ferguson and elsewhere, the immediate thought is that it must represent overwhelming power and strength. But while it clearly does mean greater firepower, it is important to note that the adoption of such an approach actually originates from a position of weakness.

Police in Ferguson have shown themselves to be distant from the population, and fearful of it. They did not engage with people – not in a community-policing way, nor by traditional means of crowd control. It was as if they imagined that simply turning up in a tank and military gear, and setting off tear gas, would be enough to scare off rioters. Meanwhile, the Starship Trooper-looking police did little to stop the looting of stores (reminiscent of how London police stood by during the riots in 2011). By posturing and wielding big sticks without clear purpose, the police in Ferguson turned a protest into a breakdown in civic order.

In a number of ways, the Ferguson police appeared like inept Keystone Kops – such as when they detained journalists, or held multiple press conferences to correct earlier statements – and looked like the smalltown force they are. But, in its aloofness from the masses and defensiveness, the Ferguson department actually shares much with its counterparts nationally.

There is a clear leadership vacuum

One of the most striking features of Ferguson – yet infrequently noted – is the stunning inability of political and community figures to provide leadership. Of all the factors, this leadership vacuum is probably the most important in turning a protest into a crisis. The mayor, James Knowles, has hardly been seen. Nixon, Missouri’s governor, took days to respond to the unrest, and then only issued statements from the sidelines. We have not seen Nixon, or other state representatives like Senator McCaskill, walking the streets of Ferguson. No townhall meetings, no promises of reviews or reforms, nothing.

Black leadership in the town has also been ineffectual in giving direction or controlling the rioters. As the New York Times reports: ‘As demonstrators gather each evening, it is not unusual to see some people carrying handguns while only a block away parents push their toddlers in strollers. Neither the peaceful protesters nor the hotheaded elements appear to have any direction or a unified leadership. Many of those on the street say they have shrugged off guidance from elders in the African-American establishment, and even from the Brown family, which has repeatedly pleaded for calm.’ Fox News anchors might get worked up over the arrival of ‘race agitators’ like Al Sharpton or Jesse Jackson in Ferguson, but these two are largely seen as irrelevant by black youth.

Outside intervention will not solve the problem

As the unrest continues, and local leadership appears wanting, there have been calls for the White House to intervene in Ferguson. President Obama has ordered a Department of Justice (DOJ) investigation for possible civil-rights violations, and has sent in the DOJ ‘community-relations service’ to ‘foster conversations among the local stakeholders and reduce tensions among the community’. He has also sent the attorney general, Eric Holder, to Ferguson. However, calls for federal intervention in cases such as Ferguson often assume that local government (and state-level government) is irredeemably corrupt and racist, which itself reflects a low opinion of local people generally.

Furthermore, to date outside intervention in Ferguson has not helped the situation, and arguably has made things worse. The media have created a circus, with crews typically outnumbering pedestrians during the daytime (and certain reporters making the story all about their own allegedly heroic stands). The media attention has attracted provocateurs and others wanting to make a statement or throw something. As one local newspaper columnist put it, ‘The longer the national spotlight is on us, the more nervous we get’. Bizarrely, events in Ferguson have even become internationalised, with Amnesty International announcing that it will send observers for the first time to the US.

National (and international) intervention is not good for building robust communities. It suggests that people are simply victims in need of rescue, and are incapable of sorting out their problems. The circus will eventually leave town, and the community will need to rely on its own organic relationships and moral resources to move forward.

Right now, there is a lack of trust in Ferguson. Our support for the people of Ferguson can begin by trusting that they have the capacity to work things out, and don’t need an army of crusading journalists, international NGOs or federal institutions to ‘save them’.