Your pity for Palestinians is making things worse in Gaza

Western thirst for images of the dead could be contributing to the bloodshed. 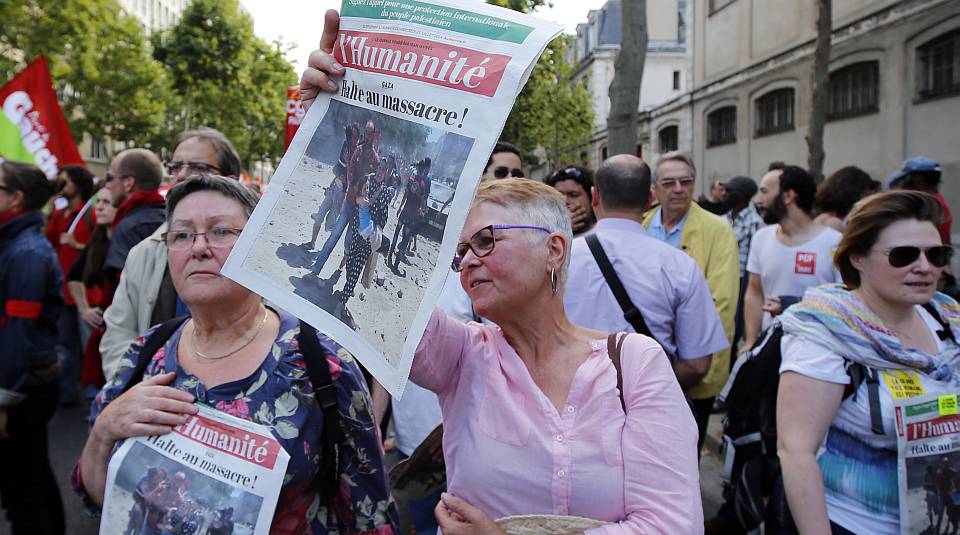 In the war of words over the war between Israel and Hamas, one question is asked time and again: why does Hamas put the civilians of Gaza in harm’s way? Hamas at least stands accused by some of encouraging Palestinians to act as human shields against the rockets from Israel and storing weaponry in civilian buildings. This week the UN Relief and Works Agency for Palestinian Refugees reported the discovery of Hamas rockets in a vacant school, in between two buildings housing 3,000 displaced Palestinians. Certainly when Palestinians are killed, Hamas’s leaders swiftly organise photo opportunities for foreign observers, giving rise to a situation where, in one journalist’s words, ‘wounded and dead women and children [are paraded] in front of the cameras’. The Israeli PM Benjamin Netanyahu caused a storm when he referred to these unfortunate souls as ‘telegenically dead’ Palestinians, publicly displayed by Hamas to ‘garner international sympathy’.

Various explanations have been offered for Hamas’s alleged endangering of Palestinian life. It does it because it is cynical, wicked, so determined to depict Israel as the monster of the Middle East that it’s actually pleased when Gazans get killed, commentators claim. But there is something else, too, another side to this sordid story, another aspect to these allegations about Hamas’s complicity in, or lack of care about, the rising death toll in Gaza. And that is the question of what urge, what audience, Hamas is allegedly trying to satisfy with its imagery of dead Palestinians. The answer is us, individuals in the West who cannot get enough of horror stories of Palestinian victimhood, campaigners and journalists over here who now barter in gory images of killed Palestinians and who promote and share such images both to demonstrate their own emotional intelligence and to put pressure on international institutions to rein in Israel and recognise Palestinian statehood.

That is, it’s all well and good to criticise Hamas for its supply of images of ‘telegenically dead’ Palestinians, but we also need to interrogate the demand side to this relationship, the thirst that exists here in the West for graphic proof of Palestinian victimhood, and the way in which this demand might, perversely, be contributing to the bloodshed in Gaza. Is it possible that modern-day Palestinian solidarity campaigns, which now almost exclusively use images of victimised Palestinians as leverage against Israel in international forums, are implicitly inviting the Palestinian leadership itself to provide more such images, and possibly more dead?

Hamas’s suspected endangerment of civilian areas of Gaza is not taking place in a vacuum. It’s occurring at a time when imagery and reports of Palestinian suffering have extraordinary clout, becoming a kind of currency in international media and campaigning circles. The Western appetite for pictures of and information about Palestinian suffering is vast. Media outlets and pro-Palestinian campaigners count and even name every Gazan killed in rocket attacks. The hashtag #GazaUnderAttack has become one of the busiest on Twitter, being used hundreds of thousands of times to share graphic images of dead Palestinians. Some newspapers have broken their own taste guidelines in order to publish photographs of dead children. When an Israeli rocket hit a beach and horrifically killed four children, images of the kids’ dead bodies were widely shared, one of the surviving boys was interviewed on primetime news shows, and anti-Israel memes were created calling on outsiders to do something to stop Israeli militarism.

The message that all this morally pornographic promotion of images and reports of Palestinian death sends to Hamas is this: victimhood works. The feverish Western marshalling of emotive imagery of Palestinian corpses to the political end of seeking sanctions against Israel or greater international protection for the Palestinian territories surely has the effect of encouraging Hamas to try to provide more of the same, more ‘telegenically dead’ Palestinians. There is a logic to Hamas’s alleged encouragement of great risk among the Gazan civilian population and certainly to its ‘parading’ of dead bodies before the press: it’s a response to the grotesque Western fashion for looking at, sharing and using as political tools images of dead Palestinians. Hamas is best seen as a kind of drug pusher to those in the West who have developed a very ugly habit of exploiting images of brutalised Palestinians both for their own needs (to advertise their emotional awareness) and for political purposes (to exert pressure on our leaders to condemn Israel).

The rise of all this dead child porn among pro-Palestinians in the West speaks to a profound shift in Palestinian solidarity campaigning. In the 1970s and 80s, Palestinian solidarity campaigners in the West tended to emphasise the capabilities of Palestinians: their ability to run their own state; their capacity to determine their affairs; their bravery (particularly in relation to the young men who took part in the First Intifada that started in 1987). More recently, Palestinian solidarity has come to be entirely focused on accentuating the incapacity of Palestinians: their weakness; their status as the world’s greatest victims; their inability to run their affairs without the huge number of Western NGOs that now swarm the Palestinian territories in order to treat mental illnesses or raise political awareness. Western supporters of the Palestinian cause have gone from emphasising the agency of Palestinians to demonstrating as much as possible Palestinians’ lack of agency, their childlike status, their need for help from the institutions of the West.

On one level, Palestinian leaders’ promotion of their victim status merely speaks to changed realities – to the fact that in the post-Cold War moment the Palestinian campaign for national liberation, like many others around the world, was on the defensive and was isolated, leading to Palestinians entering into structures and institutions that fell far short of their original demands. That is, they are politically weaker than they have ever been. But on another level, Palestinian leaders’ willing embrace of this new role as the professional victims of the Middle East also reveals a new and poisonous relationship between the contemporary politics of victimhood here in the West and the tendency of Third World groups to play up to this politics in a desperate bid to win the favour and patronage of concerned Westerners who are less and less interested in offering engaged solidarity to foreign peoples that are using their agency to win change, and are far more keen on offering ostentatious pity to, and demanding expert external assistance for, what they consider to be agency-less peoples in dark, weird, faraway places.

It isn’t just Hamas that plays this game. In recent years we’ve seen the rise of a global trend of self-victimisation, where national groups of people emphasise and even exaggerate their victim status in order to win international support and potentially intervention. In Darfur, for example, during the conflict in 2006, Darfurian groups used what a New York Times writer called ‘strategic victimhood’ as leverage against Khartoum: they actually sought to ‘provoke genocidal reaction’ from Khartoum in the hope that such government attacks on them might encourage the West to intervene and ‘pressure Sudan to hand [Darfurians] control of their region’. Other groups seeking ‘humanitarian intervention’ have done likewise, either implicitly inviting attacks against themselves or certainly devoting great energies to advertising such attacks and their own pathetic, helpless status. And now Hamas uses ‘strategic victimhood’, too, promoting to a willing audience of Western observers gruesome imagery of every attack carried out by Israel and possibly even contributing to the worsening of some of those attacks.

What this fundamentally reveals is a tectonic shift in global affairs over the past 20 years, from a world organised around the ideals of states and sovereign equality to a new era of ‘humanitarian interventionism’ which in contrast emphasises the role of the international community in rescuing suffering peoples from harm. In the older world of states, national groups that wanted to be taken seriously on the world stage had to demonstrate their abilities, their strength, their military and political capabilities. In stark contrast, in the new world of ‘humanitarian interventionism’, where international affairs are based on a belief that the West must save and protect certain peoples from victimisation, national groups that want such intervention must emphasise their patheticness, their weakness, their inability to survive without external assistance. And thus we have the growth of strategic victimhood, even of self-victimisation, where national groups and peoples are implicitly invited to emasculate themselves in order to win international pity and possibly protection.

This is what we’re witnessing under Hamas’s rule in Gaza – attacks by Israel, yes, but also the self-emasculation of the Palestinian people as part of an effort to satisfy the pitying instincts of Western campaigners and win the backing of the self-styled saviours of the international community. With Western friends like this, who are only interested in Palestinians when they are weeping, bleeding, dying and revealing their weakness, the Palestinians really don’t need any more enemies.