The vanished and the defaced

In Stalin’s Russia, the camera was frequently made to lie. 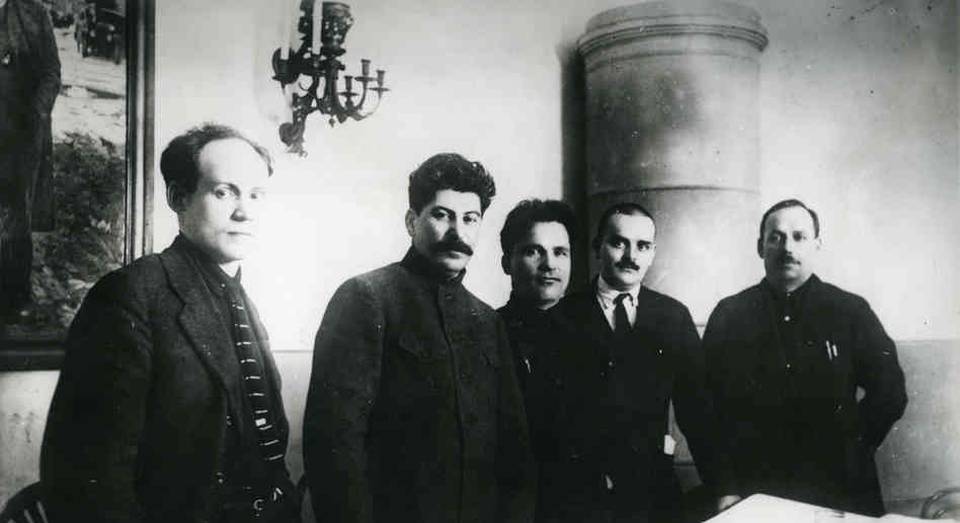 When we think of images of the revolution of October 1917, we often think of the running figures on Nevsky Prospekt, Petrograd and soldiers lining up to fire on demonstrators outside the Winter Palace. However, although the former is a genuine reportorial photograph, the second was a staged reconstruction. Our most immediate associations and impressions are visual rather than verbal or statistical. Canny propagandists have long known that. Part of the work of totalitarian regimes has been not just the creation of useful lies but the suppression of uncomfortable truths. It is an oft-repeated truism that we so easily overlook the appalling famine in China during the Great Leap Forward (1958-61) which claimed the lives of between 18 and 45million people because there is not one verified photograph of the effects.

Beginning in 1917, the Bolsheviks in Russia – in addition to a military campaign – deployed falsehoods in order to win the civil war. The doctoring of published images was one way of ‘correcting’ history as it was being written (and ceaselessly rewritten). By the time of Stalin’s ascent in the early 1920s, it was already common practice to suppress and alter images. What changed under Stalin was the scale and the necessity of such alterations. One by one, Stalin eliminated old opponents and comrades alike. Being faithful to the party line or being close to Stalin was no protection. Stalin’s paranoia struck down the loyal comrade just as his jealousy struck down the popular comrade. Occasionally the disgraced comrade’s entire family would be liquidated for good measure.

David King’s newly updated edition of The Commissar Vanishes presents us with original group photographs of revolutionary leaders and the subsequent published versions, where the liquidated were airbrushed out of history. Often it was simpler for compositors to crop a photograph ever closer to The Boss.

The Communist Party published grand photographic albums documenting the lives and work of the heroes of the revolution. Often, even as the books were printed, individuals described therein as selfless champions of the people were denounced as spies, revanchists and common criminals then arrested and imprisoned or executed, with or without the intervening stage of a show trial. Librarians, schoolchildren and private citizens (not that any citizens in the USSR could be properly described that way) were instructed to deface their copies of books which mentioned or showed photographs of the traitors. Failing to do so could entail arrest, detention and worse. The scratchings and excisions in these books are perfect visual analogies for the program of torture, execution and disappearing that targeted people essentially at random.

One of the most chilling images is the reproduction of a tattered photograph that once belonged to Prokopy Timofeyevich Zubarev. It shows 24 members of staff in the People’s Commissariat of Agriculture, circa 1933. Zubarev has scratched out then inked over four faces in green and on another occasion defaced two with purple ink. One wonders if Zubarev, who appears in the back row of the photograph, had an inkling of his own fate as he scrubbed out the faces of his colleagues. On 13 March 1938 he was condemned to death and two days later shot. The identities and fates of the defaced are unknown.

There are some photographs where almost all the figures except for Stalin were defaced or deleted. ‘Stalin with his Marshals’ needed ‘correction’ after he executed 30,000 personnel, many at the higher ranks. King provides names, fates and dates in numbing lists: shot, shot, demoted, imprisoned, shot, suicide, fate unknown…

As the Catholic Church had its index of banned books, so did the USSR. Every month, librarians consulted the ever-growing list, and pulled from the shelves condemned titles for burning or pulping. The auto-cannibalistic fire consumed even devoted acolytes. Authors of books denouncing Trotsky found their own titles banned; simply to mention the name of Trotsky, enemy of the people, was to risk imprisonment. In addition to campaigns of defacement and outright destruction, drives for pulping books, newspapers and journals to combat a chronic shortage of paper led to many older publications being destroyed. In some cases barely a handful of unaltered original printings survive, sometimes by chance, sometimes because copies found their way to foreign collections.

Besides the Stalinist system’s sinister absurdity, there were occasions of outright farce when painters producing didactic paintings in the approved Socialist Realist style received word that one of the figures in the picture had become an unperson. As in life, so in art. Barely before the paint was dry, artists were instructed to paint over the figure. If an offending painting were already in a museum or public building then a team of restorers could be deputised to do the work. If the correction was too complicated then the painting was simply taken off the walls and burned or banished to a cellar. No painter was allowed to control his work in the USSR; in the same way no person was allowed to own the truth.

In the era of digital manipulation of photographs, such alterations are easy matters. With digital storage we have the possibility of making invisible changes to documents and falsifying history more easily than ever before. No longer do we have tens or hundreds of thousands of printed documents circulating, preserving the unaltered original. Instead we have unverifiable copy-and-paste quotes, unsourced versions of photographs and ‘dead links’ on the internet. Today, digital defacement is barely detectable and there are no master copies. If, while reading The Commissar Vanishes, you are tempted to feel as though we live in a superior age where such crude doctorings could never go unnoticed, remember that The Commissar Vanishes only exists, to give witness to the treachery and insanity of Stalin’s Russia, because some original, unaltered images survived in print form. The preservation of printed documents is a pressing issue for historians today more than ever.

The Commissar Vanishes: The Falsification of Photographs and Art, by David King, is published by Tate Publishing. (Buy this book from Amazon(UK).)