Why did another football bribery scandal become huge news? Soccerism. 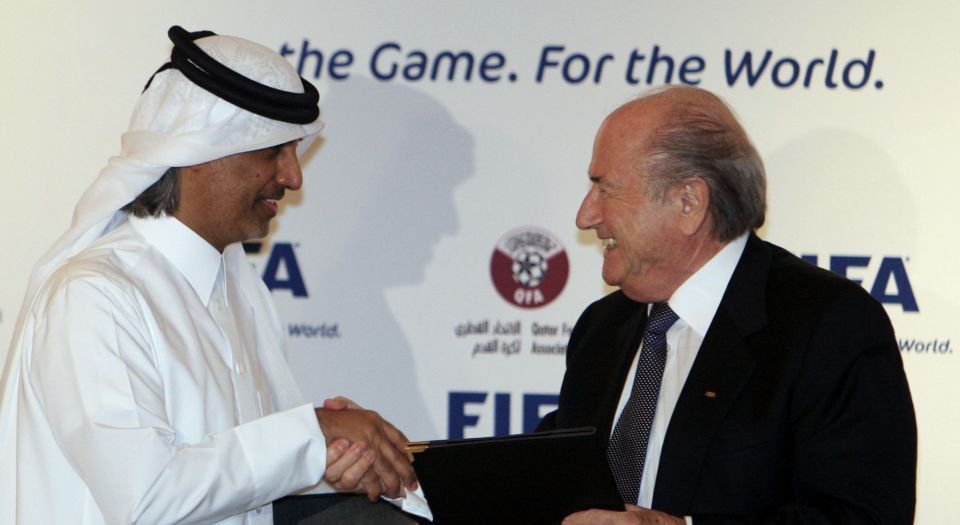 Is the bidding process for the World Cup really corrupt? Is the Pope of Football, FIFA president Sepp Blatter, a Catholic? And do FIFA executive committee members crap in free five-star hotel suites?

Only somebody as unworldly and football-ignorant as UK deputy prime minister Nick Clegg could seriously declare that The Sunday Times’ allegations of dodgy payments helping to secure the 2022 World Cup for Qatar are ‘shocking’ (no doubt Clegg was also shocked that his despised Lib Dems lost the recent elections). So why is this dog-bribes-man story apparently the biggest global news today?

Welcome to the world of Soccerism, where the status of football has been overinflated to fill the gap in our society where anything more substantial ought to be.

It is common knowledge that FIFA and Blatter have been caught up in one corruption scandal after another in recent decades, not least around alleged payments for votes in the World Cup bidding processes. The way that the biggest and richest sporting event on Earth is handed out on the say-so of a handful of unaccountable FIFA officials/presidential placemen, meeting behind closed doors and voting in secret, makes the World Cup a prime target for both financial and political corruption. There is nothing particularly new about that. There have been shenanigans surrounding the staging of World Cup tournaments from the start of the competition in 1930.

The award of that first-ever World Cup to Uruguay (the Olympic football champions) caused almost as much outrage in European football circles as the decision to stage the 2022 contest in the Qatari desert, with several countries refusing to travel to South America (even though the Uruguayan government offered to pay all expenses to smooth their feathers). Benito Mussolini ensured that Italy was the only big-money bidder to stage the second World Cup in 1934, which Il Duce saw as a footballing showcase for fascism. When FIFA then awarded the 1938 World Cup to another European nation, France, rather than alternating with Latin America as earlier agreed, Argentina and Uruguay boycotted the tournament in protest. Rival bidders Nazi Germany and Brazil were denied the chance to compete for FIFA’s favours over staging the aborted 1942 World Cup by the intervention of a real world war. But political and financial skulduggery recommenced alongside the football after the Second World War. And so it has gone on ever since, the alleged use of backhanders and arm-twisting growing bigger along with the World Cup itself.

(Any readers wondering why England were not involved in those early World Cup power struggles might note that the English FA did not deign even to enter the competition until 1950, having previously declared the Home Internationals against Scotland, Wales and Northern Ireland to be a truer ‘world championship’ than the fancy foreign version.)

If anything is new or surprising about the latest FIFA scandal, it is not the allegation that something about the awarding of a World Cup tournament smells as fishy as a sardine in the desert. What is different is that such an everyday tale (well, every four years tale anyway) of football folk behaving badly should now come to dominate the news agenda. The allegations that a former Qatari official and candidate for FIFA president paid $5million in bribes to executive members is apparently a bigger deal than anything else from Europe to the Middle East, the row over who should stage the 2022 World Cup displacing crises, coups and armed conflicts in the headlines.

Indeed, the way that, even without overt scandals, the awarding of future World Cups has become such a global media circus offers a remarkable contrast with the past. Back in 1960 when England, the ‘home of football’, was finally given the nod to stage the 1966 World Cup, there were no national celebrations. Instead, this was how it was reported on page four of The Times (23 August 1960 edition):

‘England today won by a close vote the right to hold the 1966 World Cup Association football tournament, and it will become a part of the celebrations of the Football Association’s centenary which falls in 1963. Sir Stanley Rous, secretary of the FA, said that June had been the month suggested for the competition and that the games would be played in the evening. England were awarded the tournament after gaining 34 votes to West Germany’s 27.

‘Mr P Follows, the English delegate, stressed at today’s meeting of the FIFA that the English FA was the oldest football organisation in the world, and was fully capable of organising the competition. He said that the games could be played in such cities as London, Manchester, Sheffield, Liverpool, Newcastle, Sunderland and Birmingham, and that competing teams would have all facilities put at their disposal for training. The meeting also decided that the 1962 FIFA congress would be held in Chile.’

And that was that. Two short paragraphs on an inside page announcing the biggest event in English sporting history. But then in those days, football was still widely seen as just a game (albeit the greatest game on Earth), rather than a cross between religion, politics and royalty.

The rise of Soccerism has changed all that. It is not just that football and the World Cup have become multi-billion dollar businesses. More importantly, it is that the cultural and political importance attached to football has been blown up out of all proportion, as the rest of society’s public life has deflated in meaning. With the withering of churches, social movements, political parties and much else, football often appears to be almost the only remaining ‘institution’ that can command mass loyalty and excite public passions.

The new Soccerist elites have seized upon this in an effort to use football as an instrument of social cohesion and control, a rare means of connecting with and re-educating the ignorant masses. On one hand that means setting footballers up as ‘role models’ for our children, and indeed setting up football itself as a role model for society, that can teach us all the PC values of the elite. On the other hand it means seizing upon anything that goes wrong in football, from the behaviour of fans and players to the dubious dealings of FIFA, and turning it into a public morality play that allows the likes of Nick Clegg and Greg Dyke to don a pristine white shirt and pose on the moral high ground, above the muddy goalmouth scramble below. That is why a football scandal about alleged dodgy payments to a few FIFA committee men can become the biggest news story since the last one.

Soccerism has also turned football into a global political football, a player in the great games of geopolitics. Of course, there has always been a political dimension to the World Cup, with international football treated as what George Orwell called ‘war without the guns’ every four years. Now, however, football can become the stuff of diplomatic conflict even without a ball being kicked. Thus the controversy over the award of the 2022 competition to Qatar has quickly led to demands for a review of how the 2018 World Cup was awarded at the same FIFA meeting. And which country just happened to have won the contest to stage the 2018 tournament, a decision now being called into question without any evidence of wrongdoing? It was Russia, the current bête noire, or Joey Barton, of international relations, a state which many Soccerists in the West would love to give the red card. If we can’t stop them taking back Crimea, let’s take our football back home!

That bidding process for the 2018 competition was also, of course, the scene of England’s latest World Cup humiliation. The English FA’s bid to host the tournament was fronted by a star-studded line-up of prime minister David Cameron, Prince William and David Beckham, all of whom travelled to the FIFA beano and lobbied the delegates. Having been apparently promised enough votes to be serious contenders, England ended up with just two, one of which was from their own delegate. Reflecting this week on that experience in light of the latest revelations, Cameron inadvertently revealed the pathetic way that the powers-that-be will now grasp for a touch of football to boost their moral authority, boasting that ‘Beckham said to me: “I can cope with being lied to, but I can’t cope with people lying to the prime minister and the future king.”‘

Expect more such execrable Soccerist crap as the real thing kicks off in Brazil next week.