UKIP: the revolt of the ‘left behind’

Far-right fearmongering mars a decent attempt to explain the rise of UKIP. 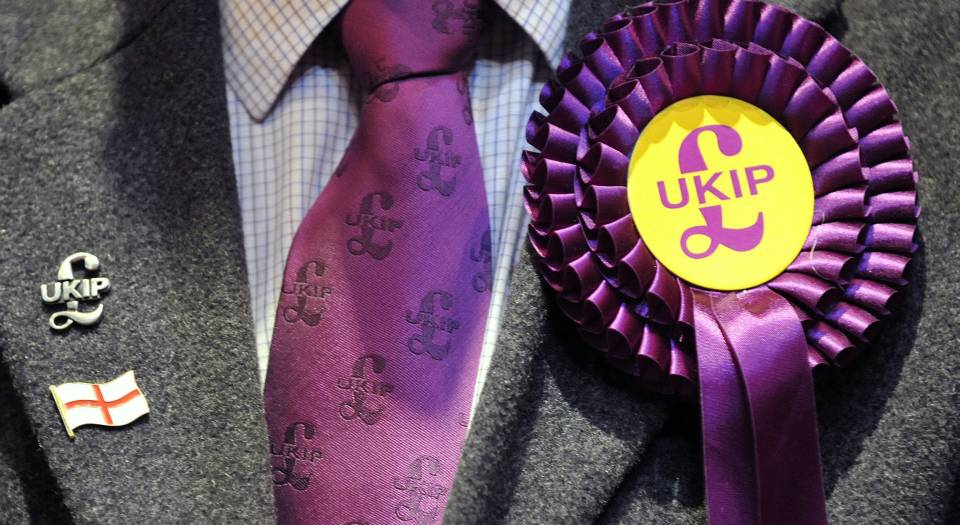 Going by the title of this new book by UK-based academics Robert Ford and Matthew Goodwin – Revolt of the Right – Explaining Support for the Radical Right in Britain – you could be forgiven for thinking that this was yet another shrill, fear-flecked treatise on Britain’s far right, a political spectre that looms far larger in the liberal imagination than on the actual streets – as the British National Party’s vanishing act demonstrates. But it’s a misleading title. As suggested by the front-cover image, showing UKIP leader Nigel Farage in full Farage mode – guffawing, quaffing and smoking – this book is really about the rise of UKIP, ‘the most significant new party in a generation’.

And as such, it does contain a great deal of insight. There are attitude surveys, there are demographic analyses, and there are supporter polls. And there is also historical backstory and an attempt at context. Plus, Ford and Goodwin have interviewed both UKIP voters and the major players in the UKIP story, from its original intellectual father, Alan Sked, a historian at the London School of Economics, to Farage at his expletive-laden best.

From this wealth of data and anecdote, an interesting portrait of British society emerges, one that does help to explain the emergence of UKIP as a genuine political force. Because what Revolt of the Right captures is a society that, politically speaking, is cleaving along new lines. These lines are not those of nineteenth- or twentieth-century class-based politics; and the political vernacular is not that of socialism and capitalism, of left and right.

The emergent picture, rather, is of a society dominated by a financially secure, university-educated middle class. And more importantly, it is a society dominated by the values of this class. Ford and Goodwin namecheck Adam Przeworksi’s Capitalism and Social Democracy when describing these values as ‘post-material’, encompassing such concerns as the environment, civil liberties and global social justice. But there’s more to this ruling outlook than new left verities. It is seen by its possessors as progressive. They are pro-gay marriage, and against all forms of nastiness. They are cosmopolitan, and against all forms of narrow-mindedness. They are for the European Union, and against all forms of Little Englander sentiment. In short, their values and attitudes are, in the own minds, completely and utterly the right values and attitudes. Their ground is the moral high ground.

But just as this social stratum has come to dominate British public life, to fill public space with its sense of progressive self-righteousness, so other sections of society, from older generations of Britain’s working class to shire Tories, have experienced a shutting out, a quick-quick-slow assault on their values, attitudes and experiences. These people, then, are not simply the Daily Mail-reading Home Counties stereotype, trotted out by too many a complacent London liberal; they number, as Goodwin and Ford make clear, a large section of Britain’s working class, too. And not only do they feel under cultural attack, not only do they feel that even raising the issue of immigration, for example, is ‘politically incorrect’, not only do they feel that they are constantly being told that their values and beliefs are wrong, or backward; politically they have no representation, no voice.

As Goodwin and Ford point out, none of the mainstream parties try to appeal to this ‘left behind’ section of society. More importantly, given the deracinated, relatively memberless nature of the modern political party, which has deeper roots in Oxford University’s politics, philosophy and economics course than in society at large, they have virtually no connection with the so-called left behind. As Ford and Goodwin put it: ‘[The left behind] look out at a fundamentally different Britain: ethnically and culturally diverse; cosmopolitan; integrated in a transnational, European political network; dominated by a university-educated and more prosperous middle class that holds a radically different set of values, all of which is embraced and celebrated by those who rule over them. This is not a country that the rebels recognise, nor one they like.’

What you have, then, is not a political conflict, but a culture war, a face-off between two sets of values and attitudes, with each competing for moral authority. Yet so far it has been a largely one-sided battle, with a self-styled progressive middle class, represented fairly uniformly by a political and media cohort, telling the ‘left behind’ that they’re, well, wrong: that their ‘bigoted’ views are wrong; that their fags and fatty-foods are wrong; that their whole being is, somehow, a bit wrong. The discourse is intemperate and condemnatory, personal and insulting.

And this is where UKIP comes in. ‘The divisions between the left behind and the British mainstream have existed for decades, but until now they have had no effective political outlet’, write Ford and Goodwin. ‘UKIP, a party formed for a very different purposes which initially appealed to very different voters, has, almost by accident, stumbled across this potent new social division and given it a voice.’ Indeed it does look accidental. UKIP, remember, was a party formed in 1993 from the dregs of the terribly titled Anti-Federalist League, a pet project of Sked. In fact, it was a party that only really became a political party proper, with a focus on broader domestic issues, with the second coming of Farage in 2010, following the ill-fated leadership of TV presenter Robert Kilroy-Silk and the awful, Islam-obsessed leadership of Lord Pearson of Rannoch. And yet, through accident rather than design, UKIP has touched upon, and given representation to, a cultural conflict in British society. This is why UKIP’s central message is not really about the EU or even immigration; it is about not being ‘them’, the elite, the arbiters of right. As Farage put it in a speech back in September last year: ‘[UKIP supporters] are fed up to the back teeth with the cardboard cut-out careerists in Westminster. The spot-the-difference politicians. Desperate to fight the middle ground, but can’t even find it. Focus groupies. The triangulators. The dog whistlers. The politicians who daren’t say what they really mean.’

UKIP really does appear to have channelled the estrangement of a hitherto subdued mass that goes well beyond its tweeded and pinstriped bedrock of support in southern England (excluding London, where UKIP has made few inroads). In 2012, Lord Ashcroft, a Conservative Party bigwig, polled 20,000 people and held focus groups with UKIP voters and found that ‘UKIP’s support was heavily concentrated in more disadvantaged and insecure groups in British society’. Ford and Goodwin’s own research supports Ashcroft’s conclusions: ‘Blue-collar UKIP voters outnumber their white-collar counterparts by a large margin: 42 per cent of these voters work in blue-collar jobs or do not work at all, while a smaller percentage of 30 per cent hold professional middle-class jobs. This picture is reversed in the main parties, where the middle classes dominate: 44 per cent of Conservative supporters are middle class, and 28 per cent are working class… In Labour, historically the party for the workers, the middle classes have a narrow 36-35 lead.’

This idea that UKIP has happened upon a section of society to which it has almost inadvertently given a voice is backed up by Farage himself, who tells Ford and Goodwin: ‘It’s tough to define but [there is] a sense that we’re speaking for them. That the rest of the political class don’t even speak the same language.’ Or as the authors put it themselves: ‘Support for UKIP does not line up in a straightforward way with traditional notions of “left” and “right”, but reflects a divide between a political mainstream dominated by a more financially secure and highly educated middle class, and a more insecure and precarious working class, which feels its concerns have been written out of the political debate.’

And that is what UKIP is doing. With its boozing and smoking leader to the fore, representing a lifestyle that is frowned upon by the great and the good of the mainstream, it is writing the concerns of a large number of people back into the political debate. The political class’s failure to speak to this section of society, its failure to do anything but dismiss it as the land of bigots and racists, has paved the way for UKIP’s relative success.

But despite the myriad insights on offer, what mars the book, what, at points, turns its insights into deadening platitudes, is the determination to fit UKIP, and what it represents, into the scaremongering narrative about the rise of the far-right – hence the misleading title. Throughout, UKIP is constantly compared to the BNP – ‘the contrast with the BNP is instructive’, runs a typical refrain. So rather than question the current anti-UKIP campaign, whereby the entire political establishment is eagerly dismissing UKIP as ‘racists’, the authors unthinkingly endorse it. This runs against the grain of Ford and Goodwin’s own research. They have talked to UKIP’s senior figures, they have talked to UKIP voters – one of whom explains he could never vote for the BNP because they’re ‘Nazis’ – and yet they can still cynically suggest that UKIP’s public face is a mere ‘reputational shield’.

No doubt this is partially because both Goodwin and Ford have spent a large portion of their careers obsessing about the far-right, with Goodwin particularly vocal about the pantomime Nazis in the BNP. The BNP’s implosion, and the English Defence League’s evaporation, has clearly left a hole in the lives of anti-fascist academics. Still, it’s a shame. A sober analysis of UKIP’s rise really can tell us something about the nature of politics today. But too often, those doing the analysing content themselves with rehearsing the politics of the past.

Revolt on the Right: Explaining Support for the Radical Right in Britain, by Robert Ford and Matthew Goodwin, is published by Routledge. (Order this book from Amazon (UK).)