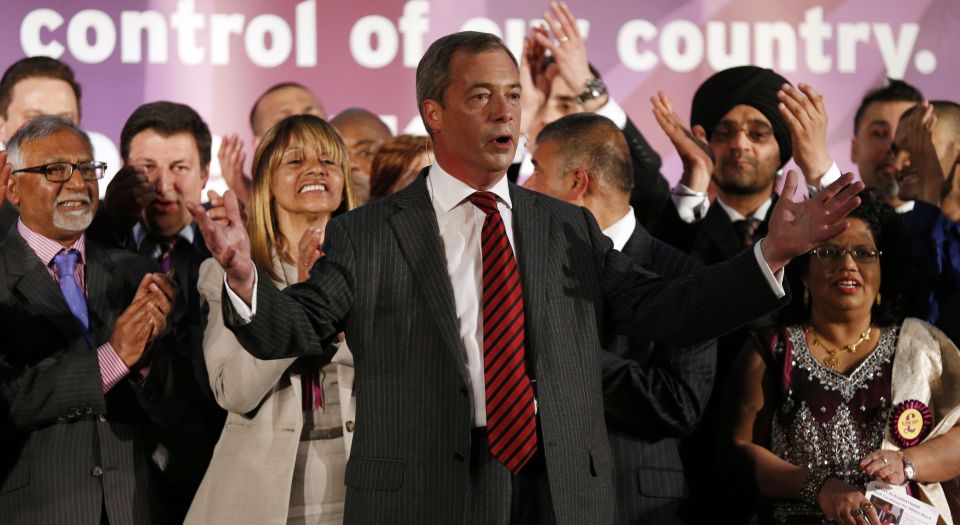 The self-styled anti-fascist protesters gathered outside UKIP’s public meeting in Westminster, central London, last night, certainly made the queuing up that little bit more exciting. Or perhaps that should be egg-citing, given the student-looking types’ proclivity for chucking their nominally left-wing ire at attendees in shell and yoke form. Either way, a smashing time was had by all.

When the protesters weren’t throwing things, they were hurling insults. ‘Bunch of bigoted wankers – that’s what you are’, said one charming young gent manning a stall adjacent to the queue. Meanwhile, his colleagues in the fight against UKIP were singing their disapproval, aided by a sound system emitting noise akin to an air-raid siren – an attempt, perhaps, to provide protesters’ Second World War blarney about the battle against fascism with a Second World War soundtrack.

But to understand the strangely bilious protests against UKIP last night as the work of ‘spoilt middle-class children who have nothing better to do’, as Paula McQueen, a black Jewish UKIP candidate in the upcoming Euro elections, put it, is to miss the real meaning of such demonstrations. It wasn’t the voice of the extreme left, to use UKIP leader Nigel Farage’s description, that could be heard outside this Westminster venue; and it wasn’t the righteous anger of self-proclaimed radical students driving the heckling from within. Rather, these egg-chucking anti-UKIP protesters are best understood as the vanguard of the political establishment’s anti-UKIP campaign. They are the youthful face of the political and media classes’ attempt to deal with UKIP, and to cope with the crisis that UKIP’s emergence as an electoral force represents. The protesters are the anti-UKIP campaign’s dreadlocked shock troops.

After all, the chants about UKIP supporters being racists are straight from the mainstream songbook. Barely a day passes without a UKIP-is-racist story appearing. It could be a media outlet publishing a tale of some UKIP member or supporter tweeting something ‘inappropriate’ about black people or Muslims; it could be a commentator calling UKIP’s election posters, yep, you guessed it, ‘racist’; it could be a cross-party campaign group accusing UKIP of, er, ‘racism’; or it could even be commentator announcing that, yes, he now thinks UKIP ‘is an overtly racist and extremist party’. (All of which goes to show the debasement of the meaning of racism rather than racism’s prevalence.)

So, despite the protesters’ left-wing pretensions, despite their delusions of political radicalism, their attack on UKIP was entirely in keeping with the establishment line. Indeed, they are, ideologically at least, part of the establishment. Listen to the words of the most-chanted song: ‘UKIP is a bigoted party, shame on you, shame on you…’ What’s striking is not just the now-familiar accusation of racism; rather, it’s the demand that those supporting UKIP, those thinking of voting UKIP, should be ashamed. They should be embarrassed by their choice. Their faces should be reddening at their political faux pas.

This has been the overriding objective of the anti-UKIP campaign – to portray UKIP, and those who support it, as beyond the pale, as people to be cast out of polite society and polite parliamentary politics. ‘Bigoted people’, to use former prime minister Gordon Brown’s fateful words. To support UKIP, so its establishment opponents imply, is to become a pariah, a person whose values and attitudes ought to be source of social shame. This is not an attempt to win over those now warming to UKIP with counter-arguments; it is an attempt to shame them into keeping their views to themselves. Rather than debate UKIP, the political class, supported by the media, and their willing fools on the ‘anti-fascist’ left, are trying to stigmatise it instead. In short, what should be a political battle has become a culture war between the ‘correct’ values and attitudes of the metropolitan, right-thinking classes and the ‘wrong’ values and attitudes of those ‘shameful’ creatures from out in the sticks now gravitating towards UKIP.

All of which makes the reality of UKIP all the more disconcerting. While outside last night’s meeting, the conflicts of the 1930s raged in the minds of anti-fascist protesters, inside the meeting room the reality of UKIP proved rather more prosaic, and dare I say it, mainstream. Female genital mutilation was denounced; inclusion and integration were praised; and a war on knife crime was declared. So far, so The Times.

Yes, various speakers spoke against the EU and of the importance of democracy and sovereignty, with the impressive Steven Woolfe surprising some by invoking the English Revolution and the Chartists. But even UKIP’s supposedly hot-button issue – immigration control – is hardly horse-frighteningly extreme. In fact, its calls for a points-based system of immigration control, echoed by Farage during his popstar turn last night, is rather more New Labour than neo-Nazi.

But it wasn’t really the specifics of UKIP policy that swelled its supporters’ chests last night. It was the sense that they were part of something, that they had some sort of political identity. Hence the roaring standing ovations didn’t follow policy points, but the declamations of identity: ‘We are not a racist party’; ‘We are ordinary people’; and most prominent if unspoken, ‘We are not them’ – the political class, ‘the college kids who went to the same schools, went to the same universities, and who have never done a day’s work in their lives’, as Farage put it.

And that’s the irony to the anti-UKIP campaign. UKIP’s appeal rests in what it is not, rests in the fact it appeals to those whose values and attitudes have been disregarded, and pushed to the margins, by an increasingly monotone and myopic political and media culture. The endlessly negative media coverage, the cheap political shots, and the shrill protests don’t prompt doubt among UKIP’s support – they galvanise it. ‘They hate us, and we don’t care’ best captures the mood of defiance apparent last night.

If the protesters’ actions were any indication, however, it seems UKIP’s opponents are content to try to shout and shame it into obsolescence. ‘We have open meetings so that people can debate the arguments’, said Woolfe after two protesters tried to shout down a speaker. ‘But if you feel you can’t…’. But it was too late. Another man had erupted in paroxysms of anti-UKIP ire. It was that kind of night.