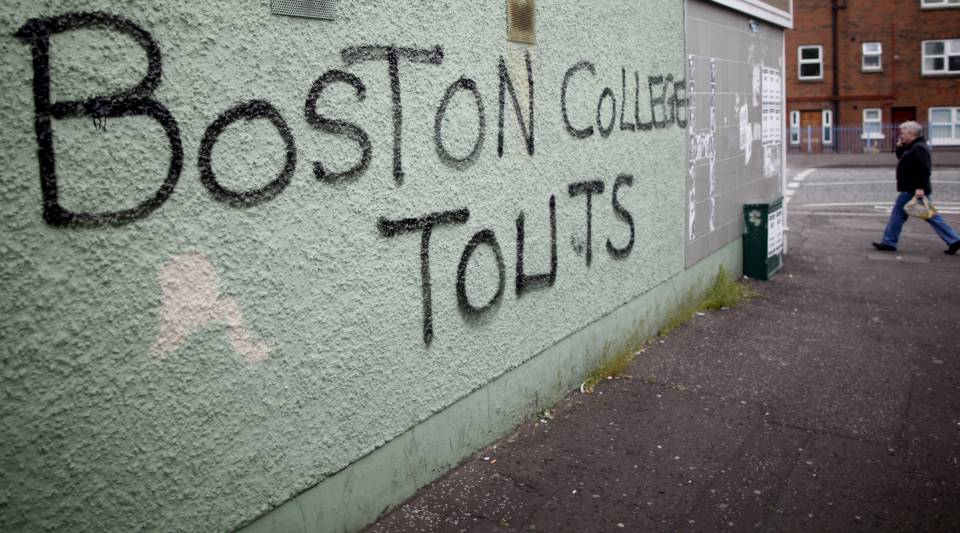 He might have been kept away from his family for four nights, and he might have found the prison food impossible to digest, but Gerry Adams isn’t actually the main victim of the British authorities’ latest raking-over of certain historical events of the Troubles. No, academic freedom is. It is the ability of academic researchers to gather information on testy, controversial issues, on matters of conflict and crime, that has been thrown into jeopardy by the British authorities’ rather zealous reopening of cases from Northern Ireland’s past.

To many observers, the arrest and questioning of Sinn Fein president Adams on suspicion of involvement in the murder of Jean McConville in 1972 is a simple case of the authorities discovering more information about that killing and deciding to act on it. Mrs McConville, a mother of 10, was killed by the IRA on suspicion of being an informer. Her body was not found until 2003. New facts, or rather claims, have come to light, news reports tell us, hence the questioning of Adams. But it’s the question of how these claims came to be public property, how they came to land in the hands of Northern Irish police, that should concern anyone who believes in the right to carry out independent thought and research free from state peering.

‘This could all have a serious, serious impact on academic freedom’, says Anthony McIntyre, the former IRA member turned political researcher and critic of Sinn Fein whose work for Boston College in America led to the arrest of Adams. In 2001, McIntyre, together with the journalist Ed Moloney, started work on The Belfast Project at Boston College. The aim was to create a new ‘oral history’ of the Troubles through carrying out extensive interviews with former members of the IRA – it was a ‘truth recovery process’, McIntyre tells me, before that truth was ‘gone forever’. Keen to get the most candid commentary possible from their interviewees, and conscious that the Troubles are very recent history, with many of the protagonists still alive, McIntyre and Moloney promised their subjects that their interviews would remain under seal until the time of their deaths. Those were ‘the conditions under which the archive would be maintained’, McIntyre says.

But then, in 2010, it was revealed by a newspaper that Dolours Price, a former IRA member imprisoned in the 1970s for detonating a car bomb outside the Old Bailey in London, had said she was the driver in the kidnap and killing of McConville in 1972 and that her IRA Officer Commanding at the time had been Adams. Adams denied this. The Police Service of Northern Ireland (PSNI) believed Price had important information about the killing of McConville, and that she may have offered up that info in her interviews for The Belfast Project, and so it asked the US authorities to step in.

The US Department of Justice demanded that Boston College turn over its taped interviews. Initially, the college said no, saying ‘our position is that the premature release of the tapes could threaten the safety of the participants, the enterprise of oral history, and the ongoing peace and reconciliation process in Northern Ireland’. But when a federal judge in Boston subpoenaed the college, insisting it turn over the relevant interviews, it caved – it proved itself a bunch of ‘pushover professors’, says McIntyre, angrily. And so did the police in Northern Ireland gain access to ‘narratives’, as McIntyre calls them, that former IRA members had given in good faith, confidentially, for the purposes of oral history and academic research only, and on the basis that they would not be released in their lifetimes. It is this court-ordered information, these stories illiberally grabbed by the PSNI working with the American state, that led to the arrest and questioning of Adams.

McIntyre, who, together with Moloney, tried his best to build an international campaign to prevent Boston College from handing over the research materials, says this case could have a terrible impact on independent academic assessment of history. ‘Other projects that involve the disclosure of information in a confidential way [could now] be sabotaged’, he says. He says Boston College’s compliance with the authorities – its ‘total spinelessness’ – is ‘totally detrimental to independent research’. ‘This affair could have a serious chilling effect on academic freedom’, he tells me.

He points to other academic fields in which research would become all but impossible if the authorities could barge into an institution at any moment and demand the handing over of materials. ‘That would destroy many aspects of criminology, for example. How could criminologists begin to talk to people who have been involved in illegal activities, whether it’s drug-dealing, political violence or back-street abortions, if they feared that their materials [might be] subpoenaed? That kind of research could seriously be closed down.’

McIntyre says Boston College’s behaviour is indicative of a broader culture of cowardice in the modern academy, an unwillingness to allow, far less stand up for, potentially controversial research and investigative study. Too many universities are now driven by an ‘institutional instinct for self-preservation’, he says, meaning that if one of their researchers causes a storm or looks into something edgy or unpopular then ‘the institution will protect itself and abandon the research – and more importantly abandon the research participants’. Indeed, universities are awash with ethics committees these days, yet they seem incapable of preventing themselves from committing what, in the academy’s eyes, should surely be the worst ethical crime of all – failing to provide a space for potentially controversial research and protecting that research from the grasping and exploitation of officialdom. What Boston College did is only a more extreme example of today’s broader lack of regard for the freedom of thinkers and researchers to try to discover the truth without having the police or judges breathing down their necks.

Probably the most worrying impact of this case is that it undermines the right of individual researchers to try to arrive at an understanding of history that differs from officialdom’s. One of McIntyre’s aims with The Belfast Project was to collect together narratives from the Troubles that would counteract any single ‘victor’s story’ of that war. But now those narratives have been commandeered by the authorities and used to pursue political or legalistic ends. ‘Now what we’re going to get is a law-enforcement view of the past’, says McIntyre, ‘and that is a very limited, self-serving view’.

This case sets an extremely dangerous precedent. One of the alleged interviewees of The Boston Project, Ivor Bell, a rare Protestant member of the IRA in the past, has also been arrested and questioned. What participant in a recent political conflict will now agree to take part in an oral history project, if he thinks he runs the risk of arrest and potentially imprisonment for sharing his assessments of that conflict? What’s more, the academic’s, and the journalist’s, right to keep their sources secret, to carry out interviews without needing to tell the whole world who the interviewee was, has been called into question by the Boston College scandal. Historical research, academic investigation into conflict, independent analysis of recent wars and tensions – all of these have just been made potentially a whole lot difficult by the actions of the British and American states in relation to the Boston College tapes.

After the arrest of Adams, McIntyre finds himself worried for his safety. Grafitti in republican Belfast says: ‘Boston College touts.’ (A tout is an informer.) McIntyre is referred to by some Sinn Fein supporters as ‘Anthony McIntout’. There is a sense of menace in the air, he says. Here, a political researcher is accused of being an informer simply for carrying out in-depth interviews with former members of the IRA, and then watching with horror as those interviews were grabbed by the authorities. Ironically, Sinn Fein and the Northern Irish authorities share something in common – a hostility to independent academic analysis, with Sinn Fein treating it as tantamount to squealing, and the authorities viewing it as something they should have the right to access, read and use as they see fit.