The eco-hysteria of blaming mankind for the floods

Blaming storms on human industry is as backward as blaming them on gays. 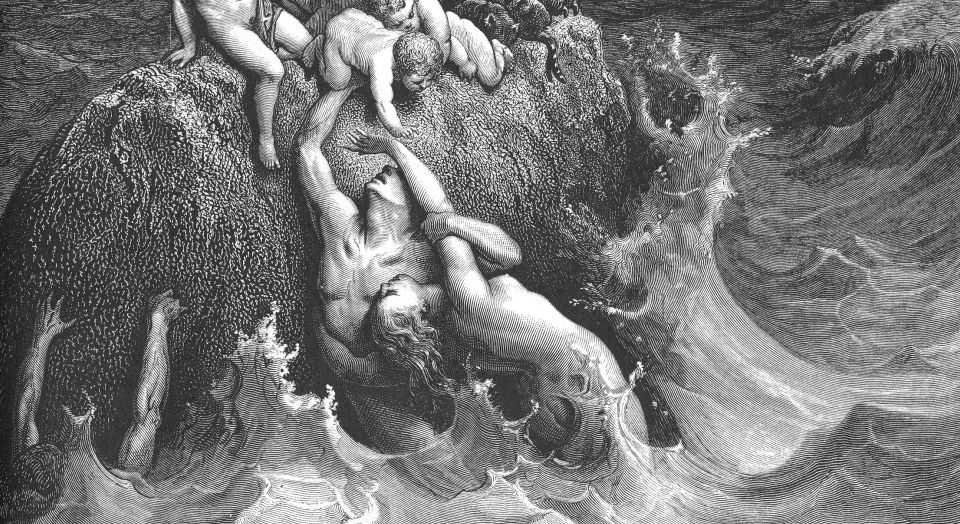 What a laugh we all had a few weeks ago when that UK Independence Party councillor, David Silvester, said floods in England were caused by gay marriage. Remember the merriment? The eccentric (I’m being polite) Silvester wrote to his local newspaper in Oxfordshire to say that the reason we are ‘beset by storms’ is because PM David Cameron acted ‘arrogantly against the gospel’ by allowing gay people to get hitched, and the internet exploded into guffaws. Silvester became the subject of witty memes, mocking tweets, and searing newspaper critiques. He was eventually ditched by UKIP. Everyone asked the same question: ‘In the twenty-first century what sort of person seriously believes that natural calamities like floods can be blamed on allegedly “sinful” behaviour?!’

Well, now we know. Now, as flooding in the south-west of England has intensified in recent weeks, we know that it isn’t only strange men who take the Bible literally who see floods as some form of payback or punishment for humanity’s deviant behaviour – so do the supposedly rationalist, secularist sections of society, the very people who just three weeks ago will have had a good old hoot bashing backward Silvester’s moralisation of floodwaters. Even the right-on moralise the weather today, treating it almost as a sentient force, a lecturing force, a vengeful force, and viewing hard rains and gushing waters as a slap on the wrist to wicked mankind – no, not for being gay, but, in essence, for being greedy.

Over the past week, as more and more towns and areas in England have become flooded, the hunt has been on for proof that it’s the fault of manmade climate change – that is, of man himself, of polluting, thoughtless, fossil fuel-using man. So former Conservative environment secretary Caroline Spelman says the floods should be a ‘sharp reminder’ to climate-change sceptics that they are wrong and stupid – ‘what is happening now relates to what we were doing two decades ago’, she said, referring to humanity’s increasing emission of greenhouse gases. Nicholas Stern, treated by many greens as a god-like oracle warning us all of future manmade doom, says the floods were caused by ‘human activities’. From the fawningly faithful reporting of his words, you could be forgiven for thinking Moses himself had published some new tablets about man’s wrongdoings. Other observers say man’s behaviour, his emission of CO2, is ‘loading the dice’ of nature’s fury, making floods more likely and more epic. One says our ‘wild weather’, the reason ‘people’s lives and properties [are] at stake’, is because of manmade climate change.

Labour leader Ed Miliband explicitly moralised the weather yesterday, when he told the Observer that ‘people’s homes, businesses and livelihoods [are] coming under attack from extreme weather’, as if the weather were some kind of military force. ‘The science is clear’ as to why this is happening, said Miliband – because man’s activities have rattled the climate and we are now ‘sleepwalking into a national security crisis’ (there’s that militaristic metaphor again). One broadsheet columnist bizarrely makes a link between the floods and human behaviour that he clearly just doesn’t like, suggesting our ‘extreme weather’ could be down to ‘the undeniable waste of energy in British cities, where office lights shine through the night and supermarkets pump out hot air at open entrances and cold air in their freezer sections’. This is pretty blatantly just another variant of blaming man’s bad behaviour for floods, albeit a more PC version than David Silvester’s – the more secularist flood-exploiters see storms as a consequence of industry, of the thoughtlessness of office bosses, of the electricity use of big, fat supermarkets, where the more religious flood-exploiters see them as spin-offs of gay behaviour.

Ah, the allegedly rationalist ‘man causes floods’ lobby will say, but we have science on our side whereas Silvester just had the made-up stories of the Bible. Do they really have science on their side? Some pretty high-calibre experts have actually said there is ‘insufficient evidence’ to draw any direct line between climate change and particular floods or weather events. And as more sensible heads have pointed out, levels of rainfall in England have long been pretty unpredictable, and parts of England have always been prone to flooding. To declare that these floods are definitely a product of manmade climate change, of ‘human activities’, of ‘what we were doing two decades ago’, is as fact-lite and driven by underlying moral prejudices as was Silvester’s claim that gay marriage stirred up the storms.

Yet across the media, blogosphere and Twitter, numerous people are hunting high and low for some graph or factlet that might ‘prove’ that climate change – which is, of course, just code for man’s exploitation of natural resources for the purposes of economic and industrial growth – is to blame for these floods. These individuals are driven by precisely the same urge as Silvester was: a longing to marshall the weather to their pet cause of chastising mankind for what they view as his immoral behaviour. Even if scientists did find some connection between climate change and general increased rainfall, we should remember two things. Firstly, it would still be the case that the urge to draw a direct line between our industrialised, relatively comfortable lives and natural disaster, between supermarkets and floods, between the fact many of us live in buzzing cities and the recent outbursts of stormy weather, would be a fundamentally moralistic rather than scientific project, motored way more by personal distaste for human behaviour than by anything remotely resembling scientific fact. And secondly, mankind more than has the capacity to protect against increased rainfall and floods, to build new towns and cities that can withstand such natural whims, by making use of the very ‘human activities’ – ambition, growth, exploitation of natural resources – that the eco-miserabilist lobby sneers at and blames for every natural disaster that befalls us.

Every time floods happen these days, eco-obsessives say the same thing: they are punishment for ‘our unsustainable lifestyles’ (a Guardian writer in the year 2000); they offer a ‘glimpse of a possible winter world that we’ll inhabit if we don’t sort ourselves out’ (a green author, 2007); they are a sign that ‘Poseidon is angered by arrogant affronts from mere mortals like us’ (Mark Lynas in his book Six Degrees). Rough translation? Mother Nature is punishing us for being bad, for being arrogant, for failing to ‘sort ourselves out’ and to behave in a fashion that the eco-meek lobby considers correct and pure. No amount of pseudo-scientific chatter or grasping at graphs that supposedly reveal the ‘truth’ of these floods can disguise the fact that, like Genesis before them, and David Silvester last month, these green-leaning politicos and campaigners are using weather to warn us out of our wickedness. Who’s backward now?