The hysteria over Sochi confirms that the Culture Wars have gone global. 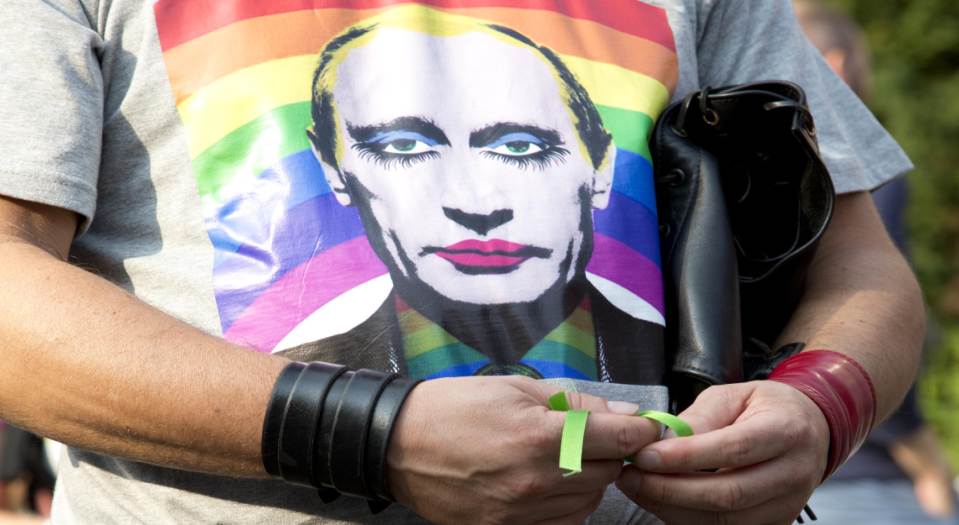 Have you tweeted, Facebooked, Instagrammed, YouTubed, blogged or in some other fashion publicly declared your love for gays and your loathing of Vladimir Putin? If not, why not? Everyone who’s anyone is at it. No sooner had the Winter Olympics in Sochi been declared open than Western newspapers and magazines were redesigning their mastheads to include the gay rainbow flag, Google was splashing the gay colours across its homepage, Channel 4 was running an archly camp skit featuring a fat man in hotpants dancing to Russian-style music, globally famous authors were penning angry letters about Putin, and virtually everyone with access to social media was making their profile pic super gay-friendly or was frantically sharing Buzzfeed’s ‘16 Most Homoerotic Photos of Vladimir Putin’. Forget curling or luge – the main event at this Winter Olympics is the mass wrestling match between gay-loving Westerners and redneck Russia.

The thoroughness with which Sochi has been turned into a platform for a showdown between enlightened Westerners who like gays and wicked Ruskies who apparently do not, with a vast outpouring of ersatz homophilia from every Westerner with a conscience and an internet connection, confirms that the Culture Wars have gone global. The increasingly bitter lifestyle spats that have been a feature of domestic Western politics for at least 30 years – pitching liberals against conservatives, the gay-friendly against the traditionalist, the cosmopolitan against the parochial – have now well and truly broken through to the international stage. Westerners’ pointing of a big fat finger at allegedly homophobic Russia – a gay-coloured, comedy-sized foam finger, of course – shows that now even between nations the politics of lifestyle trumps older realpolitik matters. Where once the West would have sought to assert its superiority to Russia in economic or ideological terms, now, like a bespectacled East Coast American liberal looking with horror upon redneck Southerners who, shudder, do not support gay marriage, it tries to get one over on Russia through the issue of lifestyle, through culture, through waging a Culture War rather than a political one.

The nodding-dog enthusiasm with which virtually every Western institution and publication has embraced Sochi as an opportunity to lambast backward Russians, and more importantly to demonstrate their own gay-friendly decency, has been extraordinary. Every day brings news of another corporation or outlet waving the gay flag, ostensibly to express fury with Putin’s recent passing of a deeply authoritarian law that forbids the promotion of homosexuality to under-18s, but really as a way of saying: ‘Look at me! I like gays! I am good!’ This Will and Gracing of the modern political sphere can be seen in the Guardian’s and New Statesman’s gay-themed refashioning of their mastheads for Sochi, in the furious spread around the internet of a meme showing Putin wearing lipstick (like a gay person!), in a hipster British brewer’s release of a ‘queer beer’ called ‘Hello, my name is Vladimir’, in Toronto City Hall’s raising of the gay flag for the duration of Sochi, in the United Nations’ decree that everyone in the West should ‘raise their voices’ for the gay community, and – get this – in Jon Snow’s decision to wear a gay flag-coloured tie on Channel 4 News during Sochi. If that doesn’t topple Putin, I don’t know what will.

What is striking about this coming together of the corporate, political, media and activist spheres in a collective expression of gay-friendly angst with once-Communist, still-backward Russia – kind of pinks against pinkos – is how little practical consequence it is designed to have. So Toronto may have raised the gay flag, but there is no discussion of Canada breaking off relations with Russia. The UN has made gay-friendly comments about Sochi, but Russia remains a permanent member of the UN Security Council. Google made its logo gay-coloured for Sochi, but it won’t be pulling out of the Russian market. Every Western commentator and campaigner keen to be thought of highly has added the gay flag to his or her Twitterfeed, Facebook page or Tumblr, but this will of course have zero impact on Russia’s internal politics. This disparity between the intensity of Western displays of Sochi-related gay-friendliness and the likely impact they will have on the ground in and around the Kremlin is striking: it suggests we are witnessing the emergence of a new form of international politicking, one designed not to achieve tangible political or territorial goals but simply to send a message across the internet, through the media, into the ether, effectively, about ourselves and our cultural superiority to the backward hordes. All that rainbow flag-waving is really about drawing attention to us, and our goodness, not to Russia or its gays.

What we are witnessing is a real-world version of that old TV show Queer Eye for the Straight Guy in which five camp, well-dressed men would tell straight fatties with beards to lose weight, clean their teeth and invest in a Prada shirt. Over Sochi, the same sense of camp disgust with gruff blokes is being expressed, only this time an army of both straight and gay Westerners are wagging a finger at the backward antics of super-hetero Putin and his dumb, automaton supporters among the Russian masses. The Queer Eye vibe of the Sochi protests can be seen in the now incredibly popular pastime of Western journalists complaining about their hotels in Sochi, which has given rise to the exact same joke on every Twitterfeed in Christendom: ‘If you scare off gays, interior design goes to hell.’ Geddit?! Because gays are really good at interior design and Putin has gotten rid of all gays! This sort of shallow global posturing doesn’t only vastly exaggerate what Putin has done to Russia’s homosexuals – no, Stephen Fry, they do not face Nazi-style extermination – but it is also incredibly patronising to homosexuals. They wear lipstick, they dance about in hotpants, they are brilliant at decorating living rooms, and Russia will be really, really drab until it embraces them – that is the message of much of the gay-friendly uprising of Westerners against Putin.

The self-promoting nature of the Sochi protests speaks to a broader truth about today’s Culture Wars in the West: these conflicts over lifestyle and identity are driven less by a serious attachment to universal values or proper liberalism than by a desire to demonstrate one’s superiority over Others, over communities whose traditions and ways of thinking one judges to be lesser, backward, dangerous. Across America and increasingly in Europe, too, the big divide within various nations is no longer between left and right or between different economic classes, but rather between lifestyle tribes and cultural groups. Our cultural outlook, our beliefs on matters such as gay marriage, abortion, gun ownership, immigration and so on, have been dramatically politicised in recent years, to the extent that a person’s entire moral worth can now be judged by whether he is pro- or anti-gay marriage, with no regard whatsoever to his economic views, his broader ideological beliefs, or his class attachments. Increasingly, people are judged, sorted into boxes marked ‘Good’ or ‘Bad’, according to the position they take on relatively isolated issues of culture and tradition.

This has nurtured gaping, often bitter new divides, between those presumed to be culturally enlightened and ‘white trash’, between cosmo EU-lovers and rude blokes who wave their national flag, between people who are pro-gay marriage and religious folks who are not (‘bigots’, as Britain’s deputy PM Nick Clegg calls them). The politicisation of culture, and the use of such cultural issues to demarcate oneself from the ‘swivel-eyed loons’ who dare to believe differently, has nurtured an increasingly tempestuous, even spiteful political landscape, in which, ironically, liberals behave increasingly illiberally by insisting that we cannot tolerate the intolerant (ie, those who don’t conform to the apparently right way of thinking). Where once those who think of themselves as liberal would have made the case for the universalism of values such as freedom and choice, now their Culture Warmongering is driven by precisely the opposite urge – by a belief that universalism is impossible in a society peopled by so many unchangeable, unthinking bigots, and by a desire to advertise their own particularism and superiority through the politicisation of lifestyle.

The gay issue has in recent years been absolutely central to the ramping up of the Culture Wars, to the fashioning of a new divide between allegedly enlightened elites and apparently bigoted mobs. In Western societies, being gay-friendly has become absolutely the least controversial stance a politician or corporation can take. Indeed, gayness has become a kind of sacred symbol of moral authority, and celebrating it has become a means of winning almost instant media and activist support. Supporting gay issues has become the key mechanism through which modern Western leaders do that thing they’re all so keen to do – distance themselves from traditionalism, from the past, from what are now viewed as outdated ideas and institutions, such as old-style marriage, long-term commitment, traditional family set-ups. The reason the gay-marriage campaign has been feverishly embraced by everyone from President Barack Obama to David Cameron to Goldman Sachs to Google and Coca-Cola (both of which kicked off 2014 with adverts depicting gay marriage) is because this most highly politicised of cultural issues is a shortcut to the moral highground as defined by the media and political classes, and it allows political parties to jettison their more traditionalist supporters and constituencies in favour of garnering favour with urbanites, younger voters, and the upwardly mobile.

And now, through Sochi, the Culture Wars in general and the politicisation of gayness specifically have gone global. A West bereft of its old economic clout and lacking serious ideological beliefs now attempts to assert its moral authority in global affairs through tangential cultural issues, and most notably through being gay-friendly. So the UN is forever drawing up lists of non-gay-friendly countries, Washington has threatened to cut off aid to countries that are not gay-friendly, and Russia is today demonised not on the basis of its economic manoeuvring or ideological positioning but because of its attitude to gays. Where once the world was divided between the civilised and the savage, now it’s split between the gay-friendly and the homophobic. Welcome to the era of Queer Imperialism. How long before a Western nation goes so far as to bomb a country that is insufficiently gay-friendly? Don’t laugh. Serious commentators already referred to America’s war on Afghanistan in the early 2000s as one ‘in which gay America can take a proud and central part’ on the basis that it routed the Taliban, who of course were homophobic. Up next on the international stage: Straights Die for the Queer Guy?