The dangers of demonising Russia

The bombings in Volgograd show how foolish it is to politicise the Sochi Games. 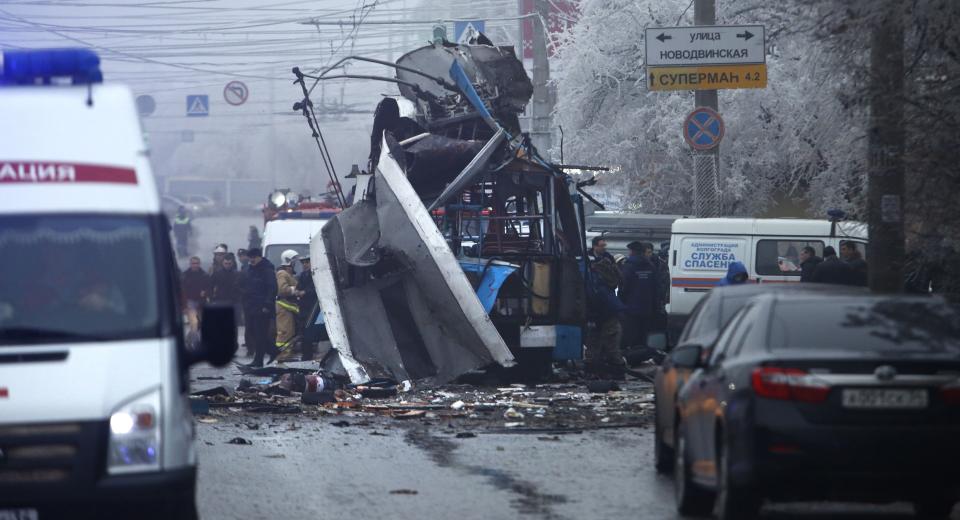 The horrific bombings in Volgograd in southern Russia have got people wondering if the anti-Russian Islamists of the Caucasus region are planning to ‘ramp up violence in the run-up to the 2014 Winter Olympics in Sochi’. The Sochi Games start in just six weeks’ time. And some think the Volgograd bombings – one of a train station, one of a bus, leaving at least 30 civilians dead and many more injured – confirm that Islamists are plotting a spate of ‘Olympics terrorism’ in order to cause maximum political embarrassment and harm to President Vladimir Putin in the coming months.

If that is their plan, is it surprising? The Sochi Games have, after all, been relentlessly transformed by influential Western NGOs, campaigners and officials into a platform for criticising and ridiculing Putin’s Russia. The Games have been thoroughly politicised, by everyone from human-rights groups to gay activists, turned into what one observer calls an ‘unlikely platform [for] world condemnation’ of Russia, a condemnation which in recent months has reached ‘fever pitch’. If Islamists think Sochi represents a good opportunity for attacking Russia, maybe they’ve been influenced by powerful Western elements who for the past year have been using Sochi to precisely those ends.

The most striking thing about the Western response to the savage attacks on civilians in Volgograd is how little sympathy there has been. There’s even a powerful hint of ‘You had it coming’ in the editorialising on the bombings. The Times’ leader on the attacks, headlined ‘Tsar Vladimir’, focuses its ire entirely on Putin, who is ‘vain, reactionary and not a little paranoid’ and has ‘accumulated unrivalled authority’, we are told. So it’s not surprising, the paper nudges, that his nation faces suicide bombings. The Guardian casually asserts that the Volgograd attacks are the ‘high price’ Russians must pay for Putin’s ‘mistakes in the [Caucasus]’. The Independent likewise says Russia is paying the ‘delayed price’ for its bad behaviour in the ‘small, mainly Muslim, autonomous republics in the Caucasus’. Shorter version: you deserve it, Russia.

These respectable observers, including Britain’s newspaper of record, are effectively saying about Volgograd what eccentric leftists say about Islamist attacks here in Britain: that ‘they had it coming’. The self-loathing sentiment expressed by some British leftists after attacks like the 7/7 bombings or the murder of Lee Rigby in Woolwich – that is, that Britain brought these assaults upon itself by behaving so wickedly in Muslim lands – is usually and often adroitly rubbished by right-leaning and some centre-left observers. Yet now, those same observers are saying that the murder of civilians in Volgograd is the logical consequence, the ‘price’, of Russia’s military behaviour in Caucasus regions such as Dagestan and Chechnya. They’re effectively providing a justification for Islamist terrorism in Russia, which does nothing to discourage such violent assaults, and might unwittingly inflame them in the long run through conferring on them the status of being an ‘understandable’ response to the tsar-like behaviour of an apparently merciless Putin. This is a very foolish thing to do at a time when the West itself faces episodic acts of Islamist terrorism.

This extraordinary double standard – where the Islamist terrorism we face is seen as being the sole responsibility of the perpetrators themselves, while the Islamist terrorism Russia faces is seen as being fundamentally down to Putin and his past militarism – is mirrored in the cavalier, even quite callous response to the bloodshed in Volgograd. Try to imagine how we would respond if, just a few days after Christmas, a St Pancras station packed with commuters was targeted by a suicide bomber and a London bus was blown to smithereens. We’d be shocked, distressed, keen to discover who the culprits were and possibly to clamp down on their suspected associates or sponsors. Yet Russia’s similar feelings of loss and anger are subtly ridiculed by Western observers. Putin will probably ‘respond ruthlessly to yesterday’s suicide bombing’, scoffs one newspaper in a piece on the corruption and authoritarianism of modern Russia. There’s nothing Putin can do anyway, says another paper; ‘the violence looks set to continue’ in divided, militarised Russia.

These double standards, the hinting that we don’t deserve to be assaulted by Islamists but Russia does, the palpable lack of horror in Western circles over what was done to civilians in Volgograd by backward Islamists from cowboy republics in the Caucasus, shows the extent to which many in the West have been blinded by Russophobia. Anti-Russian sentiment, feverish Putin-bashing, has in recent years become a glue binding together numerous political constituencies in the West. From the old right, who miss the certainties of the West-v-East Cold War period, to new leftish outfits and human-rights groups, who cannot abide Putin’s severe lack of PC on matters such as gay rights and the environment, Putin’s Russia has become a kind of whipping boy for the expression of an often shallow moral fury.

So in recent months, Greenpeace activists from the West have attacked Russian oil rigs on the basis that they are ‘destroying the Arctic’; Amnesty International has elevated the cause of Pussy Riot, Russia’s then imprisoned female punk band, above every other human-rights cause on Earth, generating a massive, celebrity-endorsed moral assault on Putin’s authoritarianism; numerous NGOs, some of them funded by American government agencies, have set up shop in Russia with the aim of exposing its democratic failings; right-leaning commentators have slammed Putin for using ‘bullying and cajolery’ to try to make modern Russia as globally powerful as the Soviet Union once was. Westerners who don’t agree on very much have become unified around the cause of Anti-Putinism.

This has reached a crescendo – or ‘fever pitch’, as one account puts it – around the Sochi Games. For the past year there have been calls from Westerners to boycott or disrupt the upcoming Winter Olympics in protest at Putin’s anti-gay policies, harming of the environment, imprisonment of dissidents, and so on. Some observers, including in that key outlet of respectable Western opinion, the New York Times, have said that attending the Sochi Olympics would be as immoral as going to the 1936 Olympics in Berlin overseen by Hitler. Such hyperbole reveals little about modern Russia – which for all its vast faults is not a reincarnation of Nazi Germany – but it does tell us something about what is driving Russophobia in Western campaigning and commentating circles: an existential need for an external bogeyman, a new Hitler, against whom we might define ourselves and advertise our comparative decency. The Times says Putin desires to ‘fill the geopolitical vacuum left by the Soviet Union’, but that criticism would be more accurately made of Putin’s Western critics: missing the clean moral divide that was provided by the West’s posturing against the ‘Evil Empire’ during the Cold War years, they are promoting Putin to the level of one-man empire against whom all Good People must take a stand.

The danger is that this casual moralisation of the Sochi Games, springing from the broader Western project of demonising Putin’s Russia, could have destabilising consequences in Russia itself. When you make it open season on ‘Evil Russia’, you potentially make it open season for everyone, including those who prefer to detonate literal bombs rather than metaphorical ones against Putin’s regime. Yes, modern Russia has been subject to sporadic attacks by Islamist elements for many years now, but the international politicisation of Sochi as an opportunity for ‘world condemnation’ of Russia could unwittingly incite more such attacks. Indeed, where Western campaigners describe the Sochi Games as Hitlerian, an Islamist leader in the Caucasus has described them as ‘Satanic’. Both sides spy an opportunity to attack what they consider to be an evil entity.

Putin’s Russia has numerous profound problems, including authoritarianism and censorship. But such problems are not helped by the self-serving Nazification of modern Russia by elements in the West who want a person or thing that they can ostentatiously rail against. In fact, such problems could be made worse by this process – backed into a corner by an opportunistic ‘international community’ and by violent Islamists closer to home, Putin’s Russia could become more rather than less likely to lash out and clamp down.