Ukraine is being turned into a plaything of Western powers. 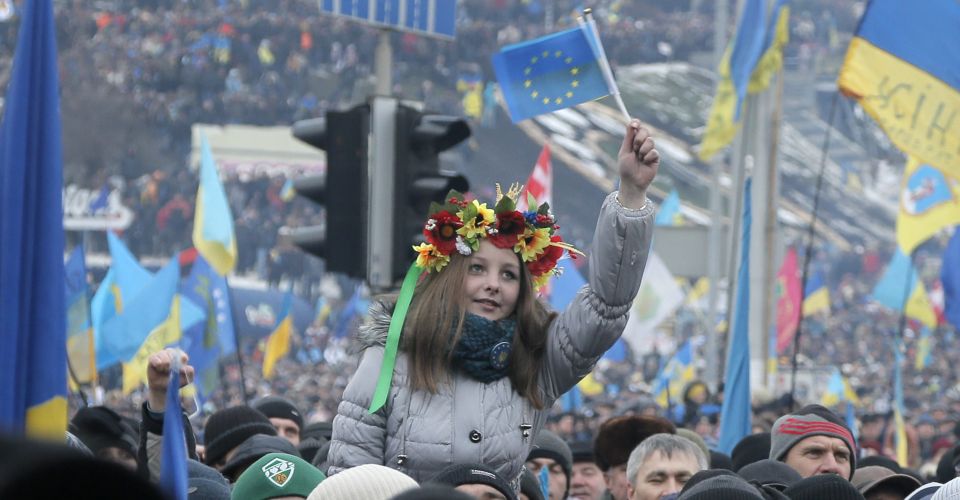 Picture the scene: it’s October 2011, and we’re at St Paul’s in London. The unhappy campers of Occupy have been literally kicking up a stink in the centre of the capital for more than a month. Their bedraggled demands for something that’s not capitalism have not been met, so they’re getting a bit tetchy. In turn, the police have been getting a bit handy.

And then the foreign politicians get involved. The Ukrainian foreign minister is first over, taking a tour of the camp while refusing to meet anyone from the UK government. He says he is disgusted by the treatment of the Occupiers, and announces to the world’s media that the UK prime minister, David Cameron, must listen to protesters’ grievances. After all, they represent 99 per cent of British people. The Russian president is next to stick his oar in. Speaking to the encrusted protesters, he agrees that ‘capitalism is crisis’, and claims he is inspired by their bravery and conviction. The Occupiers are puffed up with pride now.

On and on this goes. Each day, a different foreign official makes a trip, and each day the Occupiers grow in confidence and number. Theirs is a cause sanctioned by the world’s powers. And all the time Cameron’s government grows ever-more insecure and embattled. The flames have been fanned; divisions have been rendered intractable. A situation that was in the hands of an elected, if troubled government is now internationalised and out of control.

This is just a story. But incredibly, something very close to it is happening right now, in Ukraine.

On 21 November, a small protest sprung up in Independence Square in Kiev in response to Ukrainian president Viktor Yanukovych’s last-minute decision to turn his back on an agreement with the European Union in favour of stronger economic ties with Russia. Since then, the protest has grown in size and fervour, especially after the police weighed in on 30 November. Icy barricades have now been thrown up, state buildings occupied, and police clashes have become routine.

But if the spark for the protest was domestic, the fuel for its continued conflagration has come from outside Ukraine, flown in from the West, and bussed over from Russia in the east. Indeed, the behaviour of foreign politicians from the UK, the US and Germany has been positively reckless. It is as if Western officials don’t know how to behave anymore, as if whatever figurative rulebook for foreign affairs there once was has been lost at some point over the past couple of decades. Like so many of the West’s recent overseas escapades, and will-it-won’t-it interventions, officials and politicians combine a lack of foresight and strategic nous with shameless opportunism.

Last week, for instance, the US secretary of state, John Kerry, was all too keen to side with Ukraine’s anti-government protesters. ‘The United States expresses its disgust with the decision of Ukrainian authorities to meet the peaceful protest in Kyiv’s Maidan Square with riot police, bulldozers, and batons’, he said, before uncritically identifying the protesters with the Ukrainian popular will. ‘As church bells ring tonight amid the smoke in the streets of Kyiv, the United States stands with the people of Ukraine. They deserve better.’ Likewise, the UK foreign secretary, William Hague, blithely lent the support of the British state to the protesters. ‘It is inspiring to see these people standing up for their vision of the future of Ukraine: a free, sovereign, democratic country with much closer ties to the European Union.’

Germany’s foreign minister, Guido Westerwelle, even travelled over to Kiev and, having refused to meet President Yanukovych, proceeded to fraternise with opposition leaders and take a tour of the protest camp. There was no question of where his and the German government’s support lay. ‘We are not indifferent to the fate of Ukraine’, he said. ‘You can see from these demonstrations in the streets that the hearts of the people of Ukraine beat for the European Union.’

With each public speech in support of the protests, with each trip over to grease the palms of the opposition leaders, with each claim to be inspired by anti-government activists, Western officials stoke the protesters’ fire – and undermine the Ukrainian government. The actions and behaviour of US and European politicians, with Russian diplomats now pulling in the other direction, is effectively deciding the future of Ukraine. For all Western leaders’ talk of Ukrainian sovereignty, self-determination is the last thing this tug of war over Ukraine is likely to produce. In fact, the most likely consequence will be to entrench the existing divisions within Ukrainian society, exacerbating the tensions that exist between the largely Russian-speaking east of Ukraine and the Ukranian-speaking west. Ukraine, a territorial entity that has long been carved up by foreign powers, be it Russia or the Austro-Hungarian empire, looks set to be torn asunder again.

Because despite Western officialdom’s claims that the protesters represent the Ukrainian people as a whole, this is far from the case. They are a particular social constituency, with particular interests, not universal ones. As one observer notes, ‘the core of the movement is made up of those born after 1991’. A poll which surveyed about 1,000 protesters revealed that the average age is about 36. It is also a largely ‘educated’, middle-class movement, ‘with 64 per cent of the protesters having a university education’. And of course, it is drawing its support from the Ukranian-speaking west, not the Russian-speaking east. The protesters’ principal demand – agreement with the EU – is not one that has swayed the majority in Ukraine. As one poll reveals, only 45 per cent of Ukrainians favour an EU pact.

So for all the bluster, the protesters’ objectives, such as they are, are hardly inspiring. There is talk of sovereignty and liberation, but its substance seems to be anti-Russia rather than pro-freedom. After all, when protesters toppled and smashed a statue of Lenin in Kiev, they quickly replaced the fallen Russian with European Union flags. And, as the citizens of several member states can readily testify, the EU is no bastion of sovereignty and democracy.

The end result of this interference, this stoking up of conflict and division, will leave everyone worse off. Ukraine is being turned into a plaything, to be fought over by external agents, with Russia pulling in one direction, and the West’s leading powers pulling in the other. Democracy and self-determination proper look as distant as ever.