Being ‘pro-immigrant’ is now PC code for being anti-public. 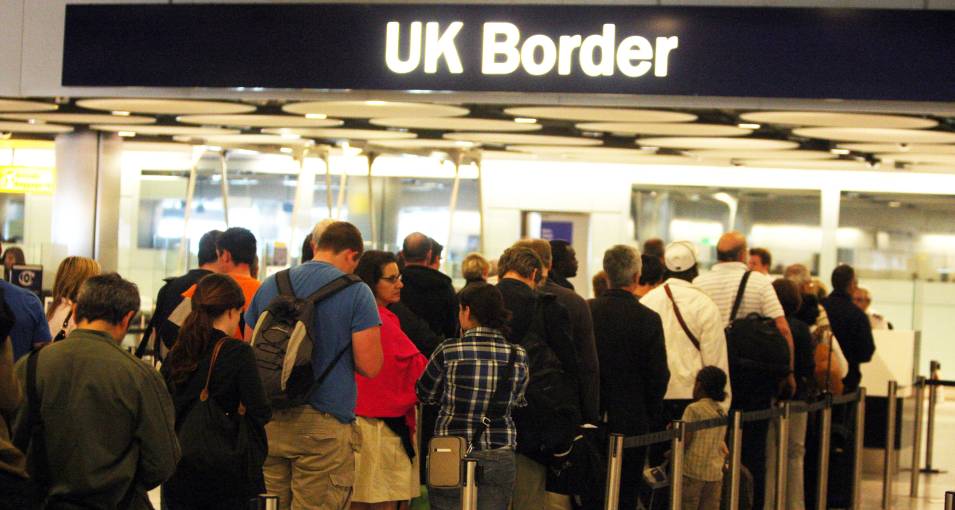 spiked is about as pro-freedom of movement as it is possible to get. Never mind Romanians and Bulgarians, we think even Africans should have the freedom to travel through, work and settle in Western Europe. So you might expect us to have enjoyed the kicking David Cameron received over the past week for his anti-immigrant posturing, from commentators and campaigners claiming to be on the side of migrants to Britain. But we didn’t. On the contrary, the assaults on Cameron over his allegedly fiery rhetoric revealed how warped, even undemocratic, the pro-immigration stance has become, and how urgently we need a new, fresh, properly liberal defence of free movement.

Much about the anti-Cameron storm didn’t add up. The PM was attacked after proposing that newly arrived immigrants should not automatically qualify for welfare benefits. He was accused of stirring up unfounded fears about Britain’s welfare larder being plundered by Romanians and Bulgarians, who will have freer movement around Europe in the new year, when actually the vast majority of such Eastern migrants are fit, healthy and keen to work. This is true. It is indeed daft to fret over the alleged scrounging instincts of a foreign population who, if those from its number who are already here are anything to go by, will labour, nurse and serve for wages. But the strange thing about the Cam-bashing is that those who spearheaded it are not only far from being in favour of freedom of movement – they also actually agree with Cameron on curbing new migrants’ benefits.

So Labour’s Yvette Cooper made waves when she claimed Cameron was ‘panicking over Romanian and Bulgarian workers’. But when you dug down under the Cooper-cheering headlines, it became clear that she supports curbing benefits for new migrants – in fact, Labour thought of it first. ‘The prime minister is playing catch-up. Why has it taken him eight months to copy Labour’s proposal?’, she said. Even some of the more excoriating newspaper editorials were sympathetic to Cameron’s central idea. The Independent‘s leader was a hit with tweeting lefties, with its slamming of Cam for being ‘neurotic’ about immigration and spreading ‘hysteria’ about Eastern Europeans; yet is also said this: Cameron’s proposals are ‘not without merit’ and ‘it is not unreasonable to minimise the temptation [to migrants] of Britain’s welfare and healthcare provisions’.

The most striking example of Cameron being slated over his immigration-talk by someone who is hardly a friend to immigrants was when EU commissioner László Andor got stuck in. Andor, the EU’s man on employment, social affairs and inclusion, got British-based critics of Cameron all excited when he warned that Britain risks becoming the ‘nasty country’ of Europe as a result of its ‘hysteria’ over immigration. Cameron should give a ‘more accurate’ picture of the likely levels and impact of Romanian and Bulgarian migration to Britain, he said. So here we have a man who works for an organisation whose stringent, unforgiving anti-African immigration policies have led to the deaths of hundreds of migrants on the coasts of southern Europe lecturing Britain on how it talks about immigration. Being told off about one’s bad attitude to immigration by a Brussels-based suit is like being lectured about one’s drinking habits by Shane McGowan.

So if the loud critics of Cameron are actually in agreement with him – either on the specifics of curbing benefits or on the general idea that migration must be more tightly policed – what is pumping their bluster? What is it about Cameron’s comments that caused them to bash out editorials or press releases attacking his neurosis and hysteria? What they’re really worried about is not the impact that Cameron’s proposals will have on Romanians and Bulgarians, but the impact they will have on Brits, on the apparently mushy, malleable minds of those less well-read sections of Britain with their innate hostility to migrants and their latent desire to attack foreigners. What outraged Cam’s critics was not that he suggested making migrants’ lives a little harder, but that he suggested it in front of the children – us, the masses of Britain, who are apparently too politically immature to hear such talk.

The fear of a rash public reaction to Cameron’s comments ran through virtually all the anti-Cameron commentary and statements. So that Independent editorial which generally agreed with Cameron’s proposals but nonetheless accused him of stoking ‘hysteria’ argued that the PM was ‘fanning the flames of misconception when he should be dampening them’. He was clearly angling for a ‘quick win with the public’ – because the public hates immigrants, of course – when ‘his job is to lead, not merely to follow’. This is what László Andor was getting at, too, when he said Cameron was formulating his new policy on immigration ‘under pressure… under [the] hysteria which sometimes happens in the UK’. That is, the PM is pandering to the inflamed, hysterical misconceptions harboured by your average Brit when he should be shooting them down.

The idea that the public is profoundly anti-immigrant, and possibly even racist, is widespread. ‘Voters will love it’, said one Guardian columnist of Cameron’s proposals. A writer for the New Statesman said Cameron was ‘stok[ing] public anger and distrust on immigration’, and in the process he is ‘threaten[ing] the stability of our political system’ because enraged anti-immigrant voters will now turn to smaller, far-right political parties in order to express their racial frustrations. ‘[M]ore and more voters are moving from the mainstream to the margins, guided by a toxic and – to be frank – nasty group of opinion-makers [who are] sowing the seeds of xenophobia, protest and division’, said the NS writer. In short, like cattle the latently racist public is being led into unpredictable pastures. Another broadsheet critic of Cameron accused him of ‘fanning the flames of xenophobia and dividing our society’.

This twitchy fear of what horrors Cameron’s words might unleash among the basically racist throng was summed up in the oft-repeated phrase ‘dog whistle politics’. Numerous commentators accused Cameron of ‘pure dog whistling’, of using ‘the politics of the dog whistle’ on the issue of immigration in order to shore up his public support. Think about how insulting that phrase is. It refers to the process by which a mainstream politician emits a shrill noise which will not be heard by Us, the decent folk, but will be heard by Them, the xenophobes, the prejudiced, the dogs, effectively, of public life and mass society, who are just waiting for the order from their master before unleashing their inner anti-immigrant fury. The illiberal liberals of the anti-Cameron set are really upset with him because they think he has potentially unleashed the dogs of hatred.

What underpins this supposedly ‘pro-immigration’ stance among influential left-leaning politicians and opinion-formers is the idea that anti-immigration sentiment comes from below, from the mob, and politicians have a duty not to indulge it. So even the radical Socialist Worker newspaper accuses Cameron of ‘wading into the racist sewer’. That is what both the radical and elite critics of Cameron’s immigration-talk are really worried about – the ‘racist sewer’, inhabited by easily led, ‘toxic’ individuals whose hate is ‘fanned’ by Cameron. By this reading, the problem of anti-immigration sentiment in Britain comes from the little people, from tabloid-readers, and not from those in power who make actual laws restricting migrants’ freedom of movement and imprisoning so-called illegal immigrants. What a perverse, utterly topsy-turvy way of understanding modern Britain’s problem with immigration.

What the Cam-bashing of the past week reveals is the extent to which being ‘pro-immigration’ now really means being anti-masses. Indeed, fear of the British native has replaced fear of the immigrant among Britain’s cultural elites. Where once Britain’s mainstream opinion-makers would have had us believe that immigrants, with their strange habits and beliefs, were a ‘threat to the political system’ and our way of life, now they say the same thing of the natives, of British-born white communities that are seen as peculiar and given to xenophobia. The cultural elites’ sense of attachment to The Immigrant is growing in direct proportion to their feeling of alienation from, and incomprehension at, Britain’s own little people. That is why commentators now contrast ‘tax-paying immigrants’ to ‘indolent British scroungers on their couches drinking beer and watching daytime TV’ – because they are drawn to the immigrant through their disgust and disdain for their own native hordes. These observers are pro-immigrant only in the sense that they have turned the immigrant into a symbol of decency, infused with shades of victimhood, which they might use to beat the prejudiced publics they feel surrounded by every day.

We end up with the worst of all worlds: a ‘pro-immigration’ stance that does nothing to boost freedom of movement (in fact it agrees with most of what Cameron does on immigration), yet which does fuel elite hostility towards the masses and give rise to a more timid, self-censored debate on immigration. We need the opposite – an upfront, loud, testy debate on immigration, through which we might expose who is really hampering it and also put the case for full freedom of movement. We at spiked aren’t ‘pro-immigrant’ – we are pro-freedom of movement, for all, for the Bulgarian and the Botswanan, for the rich and the poor, for anyone who wants to come here and find out for themselves that Britain is not in fact packed with ignorant, violent racists.