A perfect storm of panicmongering

While ‘St Jude’ didn't live up to the hype, the authorities’ overreaction did. 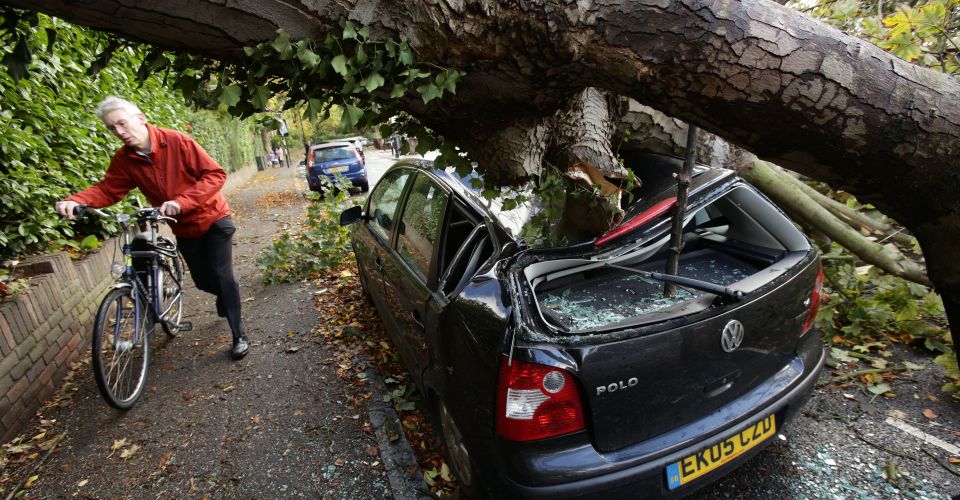 Let’s hear it for science! The UK Met Office was issuing warnings days ago about a storm that would sweep across the Atlantic and hit the UK on Sunday and Monday. Before the storm even existed. But if the storm was a great piece of forecasting, you didn’t need a supercomputer to predict the reaction to the storm’s approach.

From the first inkling that the country was going to be hit by unusually strong winds and heavy rain, the nation’s panicmongers went into overdrive. There were days of repeated warnings about just how bad it was going to be – with lots of allusions to the ‘Great Storm’ of 1987 (itself only a ‘great storm’ in a country that doesn’t really do big storms). This week’s storm was christened ‘St Jude’ (the patron saint of lost causes) by a Weather Channel forecaster, and the name quickly became common currency. The UK prime minister, David Cameron, made great play of holding an ’emergency meeting’ to make sure the country was ready. Train operators decided to institute blanket cancellations of services across the south of England. At every stage, we were told to ‘be prepared’.

The result, however, was by and large a damp squib. Trees were felled and huge waves battered cliffs; fences blew over and power lines came down, with hundreds of thousands deprived of electricity, temporarily. There were four deaths, each due to a combination of bad weather and even worse luck. But while these fatalities were tragic, in the great scheme of things, St Jude was not a particularly serious event. Heavy snowfalls often cause just as much disruption, if not more, yet do not seem to provoke the kind of portentous coverage that ‘St Jude’ received. While train services were disrupted, shutting the network down in advance rather than assessing the damage first seemed like an enormous overreaction.

The lesson we could have learned from the storm is simple: that a modern, developed country like the UK is perfectly capable of surviving such an event with comparatively little damage. By Tuesday, most homes that had been blacked out had electricity again. No doubt many people will have some mess to clear up that will take a few weeks to sort out, particularly those waking up to a tree lying across their now-flattened cars. But this storm hardly lived up to the hype.

Indeed, the hype produced another storm – of cynicism. The morning commute in London, far from bearing witness to scenes of destruction, was for the most part ‘enjoyed’ by Londoners in bright sunshine and a refreshing breeze. This was a storm experienced more in the media, both traditional and social, than directly. And for every image of a fallen tree, there was another of a toppled garden chair or gnome. ‘What happened to our superstorm?’, seemed to be the sarcastic question on everyone’s virtual lips.

Going overboard on a storm is fairly unusual for us Brits. We rarely get a chance to overreact to such weather, given our temperate climate. But Americans are getting used to officialdom pressing the panic button. In 2011, Hurricane Irene prompted the declaration of states of emergency along the East Coast, and even evacuations, only to peter out. A year ago, Hurricane Sandy was certainly an enormous storm which caused extensive damage. But even that humdinger paled next to the hype that preceded it. Meanwhile, little attention is given to poor Caribbean countries that really are much more vulnerable to such events and for whom a massive storm really can be a disaster.

Underlying the repeated warnings is a sense of foreboding and vulnerability that exists quite independently of any particular threat. Some such threats have come and gone. In the late Nineties we had the scare stories about a ‘human form’ of ‘mad cow disease’, which was supposed to wipe out hundreds of thousands of beef consumers, but ended up affecting a few dozen. Then there was the ‘Millennium Bug’, set to strike on 1 January 2000 and take down the world’s computer systems, but which barely caused an overstated telephone bill. Other problems make occasional comebacks, like panics about an impending ‘killer flu’ that ends up killing thousands rather than billions. And, of course, there is climate change, the never-ending shadow across all of our lives, regardless of the absence of any real impact.

This is not to say that major storms, the latest infectious disease or the vagaries of climate are not problems at all. Rather, it’s to say that in every case our capacity to cope is downplayed again and again. As the late American social critic Susan Sontag smartly observed in relation to the panic about AIDS, it’s not ‘Apocalypse Now’, but ‘Apocalypse From Now On’.

This sense of vulnerability is both nurtured and exacerbated by officialdom. In New York, the city’s mayor, Michael Bloomberg, never seems to leave any potential threat unhyped. The same is true of his counterparts across the pond. Even a blatant piece of political PR, like David Cameron’s ’emergency meeting’ last weekend, only serves to send out the message that there is something to be very worried about.

In turn, the non-appearance of the apocalypse generates cynicism, building mistrust in our institutions and undermining the idea that we can turn to them in times of need. When the proverbial excrement hits the fan, the authorities will simply shut down society. Moreover, there will come a time when we won’t have prepared for a crisis because we’re always being told to prepare for a crisis, we’re always ‘on alert’ – a case of the authorities crying wolf.

A little more faith in our ability to cope with life’s travails would serve us better than the endless demands to ‘be prepared’.