Why is the DPP defining press freedom? 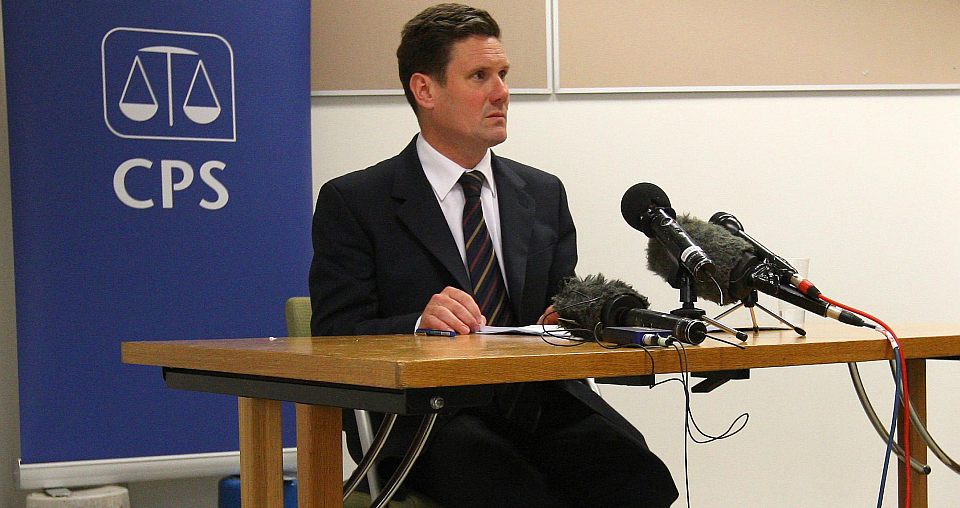 There have been few heroes in the ongoing struggle over UK press regulation. It has been a generally sorry tale in which politicians, lawyers, Lord Justice Leveson and a chorus of celebrities and journalism hackademics have used the phone-hacking scandal as a stick with which to beat press freedom into submission.

Yet now, it seems, some liberal voices have discovered a heroic figure prepared to make a brave stand for bold ‘public interest’ journalism. Step forward Keir Starmer – the, er, Director of Public Prosecutions.

As he reaches the end of his term as Britain’s chief prosecutor, Starmer has given a valedictory interview to the Guardian, house journal of the chattering classes. He told the paper that ‘There are lots of examples of journalists who, on the face of it, may have broken the criminal law but have obviously pursued a greater good in doing so’. It would be ‘very unhealthy’ if ‘a journalist felt that they needed to go to their lawyer before they pursued any lead or asked any question’. That was why, said the outgoing DPP, he had issued legal guidelines in September 2012, to protect journalists from prosecution if they were acting in the ‘public interest’.

Some might have expected the Guardian’s journalists and editors to laugh in Starmer’s smug face at this point. Dozens of UK tabloid journalists have been arrested in dawn raids and left in limbo on police bail for up to two years; the Guardian itself is now facing police probes over its publication of intelligence leaks, with Tory MPs demanding it be prosecuted for treason; the first high-profile trials of former newspaper editors and executives arising from the hacking scandal are about to start; and the political parties are trying to impose a new system of regulation on the press backed by the force of law and Royal Charter.

These measures have helped to create a chilling effect on the press, an atmosphere of caution in which journalists do indeed already feel they have to consult lawyers before pursuing controversial stories – with the result that many such investigations never happen.

With the British authorities seemingly in a state of undeclared law-war on press freedom and trouble-making journalism, it surely stretches credibility further than any tabloid headline to see the Director of Public Prosecutions posing as a defender of investigative reporting. Yet such is the liberal elite’s attachment to the state (the flipside of its detachment from the public) and need for enlightened messiahs that it hailed Starmer as a hero. ‘UK’s top prosecutor defends journalists who break law in public interest’ declared the Guardian headline, as the interviewers praised his ‘robust defence of journalists who break the law pursuing investigations that have a genuine public interest’. Many of the readers’ comments that followed the interview were in a similar vein, revelling in the DPP’s distinction between ‘genuine public interest journalism’ and the supposedly ‘unethical’ tabloid version.

Amid this legalistic love-in, it did not seem to occur to the Guardian journalists to ask the one question that matters: who are the chief prosecutor, or government ministers, or Lord Justice Leveson, to decide what might be in the ‘public interest’ for the public to see?

However sympathetic to journalists Starmer might claim his guidelines to be, they still leave it to the legal authorities to judge what can legitimately be reported. Even if the outgoing DPP truly was the Christ-like figure some seem to imagine, that would be no good reason for us to entrust him or his successor with the precious liberty of press freedom.

Starmer has sensibly resisted calls from lobbyists for the ‘public interest’ to be strictly defined in law. Whether or not a journalist should be prosecuted, he says, needs to be assessed on a case-by-case basis: ‘We took the approach that we would assess where there was evidence of a criminal offence, whether the public interest in what the journalist was trying to achieve outweighed the overall criminality.’ He also concedes that it might not always be in the public interest to pursue a prosecution even in cases where the specific law does not allow for a public interest defence; for example, the 2010 Bribery Act would have made it illegal for the Daily Telegraph to pay for the dirt on MPs expenses, but he would not have prosecuted the paper.

That might all sound sensible enough. The underlying point, however, is that it remains up to the DPP and the courts to rule on what is and is not ‘public interest journalism’. And that power casts a long shadow over investigative journalism and public debate.

As spiked has consistently argued, the ‘public interest’ has always been an elitist notion used to police what the public should be allowed to read or hear. The key distinction that is always made is between the public interest and ‘what interests the public’. This is just another way of saying that the public does not really know what’s good for it, and so the enlightened few must decide for us. Brian Cathcart of the Hacked Off lobby believes that, left to their own devices, the great British public would want to bring back bear-baiting and public hangings. How much better to trust the suave Starmer rather than risk letting the mob run free!

The attempt to draw a line between ethical public interest journalism and tabloid dirt-digging was a constant feature of the Leveson Inquiry into the ‘culture, practices and ethics’ of the press. Thus the Guardian’s chief investigative reporter was happy to tell Lord Justice Leveson that he, too, had hacked phones in pursuit of story – but unlike the News of the World, he had done it for ‘ethical’ reasons, in pursuit of the public interest. That was, of course, the ‘public interest’ as defined by the Guardian‘s editors.

The public interest line is simply a code for expressing the tastes, prejudices and agendas of those in the political-media class to whom ‘popular’ is a dirty word. The question that these investigators don’t ask is, whose ethics are they, anyway? As Starmer told the Guardian, ‘Defining the public interest is always very, very difficult’. But don’t worry: ‘We did go through a consultation exercise on that and I think we’ve got it about right.’ By consulting a coalition of the great and good, from lawyers to academics, the DPP appears to think he gained a mandate to redefine press freedom.

We are left with the surreal spectacle of liberal opinion-makers praising state prosecutors for defending journalism, while ignoring the small matter of dozens of journalists and editors being arrested, left in legal limbo or charged in what looks like a campaign to criminalise tabloid journalism. As the liberal elites wrestle with their consciences once more, and win, the double-standards on display are remarkable even by their lights. Nobody even seemed to notice the irony of the Guardian’s gushing interview with the allegedly freedom-loving DPP being immediately followed by its short report of the Sun’s chief foreign correspondent being charged with offences allegedly relating to a Labour MP’s phone.

Starmer is right that it is hard to have sweeping catch-all definitions of what is a legitimate story or method of reporting. That is why journalists and editors must be free to make their own judgement calls in each specific case. And then be held responsible for those judgements by the public. But the public can only debate and decide what is in its interests once everything is in the public arena, whether Starmer and his acolytes like it or not.

Press freedom remains an indivisible liberty. It is not up to the legal authorities or anybody else to restrict its meaning to that of which they approve. We can all have our own standards and beliefs as to what makes professional or ‘ethical’ journalism. But others are under no compulsion to follow them. That is the hard thing about freedom – it is for other people, too.

Without journalists being prepared to defy the authorities and break laws, there would never have been any press freedom in Britain or America, and few of the great stories of the past 200 years would ever have seen the light of day. Of course journalists cannot have blanket immunity from prosecution and are subject to the same laws as everybody else. These days, however, it often appears that popular journalism is being singled out for special harsh treatment by the authorities – see for example the contrast in the kid-gloved treatment of major corporations and law firms now accused of phone hacking. This has contributed to a climate change in which investigative journalism has entered what one editor defines as ‘an Ice Age’.

Self-righteous preaching about ‘public interest journalism’ has become the public enemy of unfettered press freedom. That freedom is not in the gift of the government, the judges or the Director of Public Prosecutions – nor his high-minded fan club.