Egypt and the hypocrisy of the human-rights industry

Westerners who love to be outraged by foreign tyranny are blasé about Egypt's. 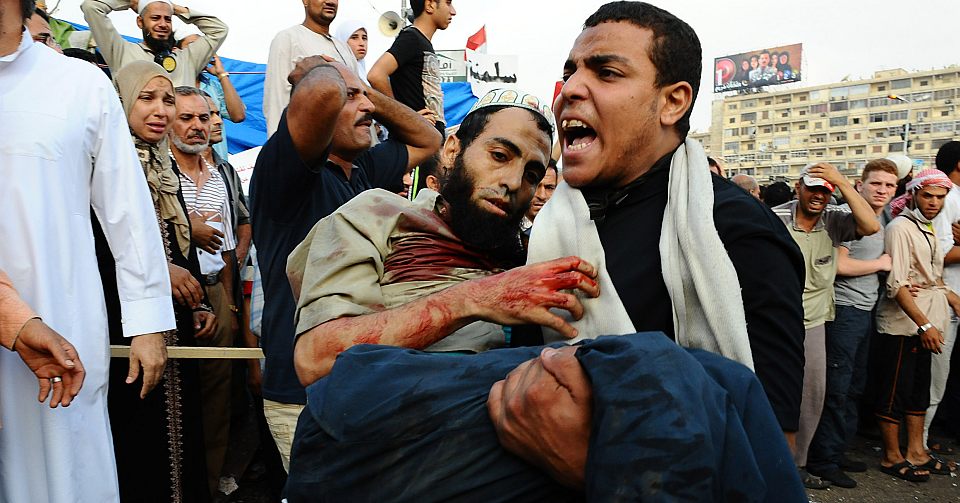 Imagine if, in 1973, with elected Chilean leader Salvador Allende being swept from power in a bloody military coup by the unelected General Augusto Pinochet, a group like Amnesty International chose to focus its attentions almost exclusively on the plight of a poet being banged up in, say, Belarus. Even if you believed the imprisonment of poets to be a very bad thing, you would think that was weird, right? A case of twisted priorities.

Well, the equivalent is happening right now. In Egypt, a military dictatorship has deposed and imprisoned an elected president, massacred hundreds of his supporters, and created government departments to oversee the interrogation and torture of ‘terrorists’ (otherwise known as Muslim Brotherhood voters). And yet the big issue on Amnesty’s online activism page is, as it has been for months, the continuing legal fights of imprisoned Russian punk band Pussy Riot. It seems if you want to win the attention of the West’s best-known human-rights outfit, it helps to be pretty white women with guitars rather than gruff brown men with beards.

There are many striking things about the political situation in Egypt. But perhaps the most striking thing is the silence of those who pose as human-rights cheerleaders, of the West’s head-shakers over tyranny in far-off lands, who have gone strangely mute, or at least uncharacteristically coy, in the face of the Egyptian military’s seizure of power and repression of dissent.

From all those high-minded newspaper columnists who normally bang the drum for Western warmaking against foreign countries that do authoritarian things, nada. From the leaders of Britain, America and France who usually get off on denouncing tyrannical militarism, zilch – or at best a half-assed plea to the Egyptian military to calm down. And from the human-rights industry, the self-styled moral conscience of the decent West, not much. Scour Amnesty International’s recent statements and you’ll discover that it has in fact put out an anaemic press release about Egypt, calling on the security forces to ‘protect protesters from violent attack’. What? It’s the security forces, primarily armed police units, that are violently attacking the protesters. No wonder Amnesty hasn’t said much about Egypt – it doesn’t seem to know what’s happening there.

The Western do-gooder lobby’s lack of concern about the bad currently being done in Egypt is summed up in the severe downturn in the number tweets containing the word ‘Egypt’. Between 1 January and 28 February 2011, when Egyptians rose up against the then dictator Hosni Mubarak and his violent security apparatus, globally there were 3,005,395 tweets containing the word Egypt, as many Western radicals and human-rights types hammered their outrage into 140 characters. Over the past four weeks, as numerous Egyptians have taken a stand against the new dictator Fattah al-Sisi, and have been massacred or jailed in their hundreds for doing so, globally there have been 1,970,570 tweets containing the word Egypt. And bear in mind that the number of registered Twitter accounts has more than doubled since early 2011, rising from 175million to over 500million. So the number of Twitter users has risen exponentially, yet the liberal Twitterati’s expressions of outrage over events in Egypt are shrivelling up.

The lack of outrage from those who normally make a great display of being outraged by foreign tyranny is striking, because there’s a great deal to be outraged by in Egypt. Here’s what’s happened: On 3 July, Mohammad Morsi of the Muslim Brotherhood, who was elected by 52 per cent of voters in 2012, was deposed by his defence minister, al-Sisi. Morsi has since been imprisoned on jumped-up charges of conspiring with Hamas to destabilise Egypt. Many of his ministers have been put under house arrest. Al-Sisi’s military regime has rehabilitated Egypt’s much-hated secret police, the Mabahith Amn ad-Dawla. Created by Muburak, this outfit is devoted to investigating, harassing and sometimes torturing Islamist and other opposition activists. Its scrapping was one of the key demands of the January revolution against Mubarak. Now it’s back.

The new regime has also launched a ‘war against terrorism’, by which it means against anyone who publicly opposes al-Sisi. At the end of last week, it called upon Egyptians who support the military, which includes many radicals, to swarm the streets in order to give the army a ‘mandate to confront possible violence and terrorism’. Sadly, radical Egyptian groups were quick to provide that mandate. Tamarod, the left-leaning, post-Egyptian Spring movement that called for the removal of Morsi, got its supporters on to the streets and said it was ‘happy for [the security forces] to play their role in confronting the violence and terrorism practiced by the Muslim Brotherhood’. We saw the end result of this ‘war against terrorism’ at the weekend, with the massacre of at least 83 Morsi supporters, carried out under the guise of combatting terrorism and with the complicity and radical cover of groups like Tamarod.

So, an elected president has been deposed and imprisoned; the secret police have been brought back into play; all forms of opposition have been rebranded ‘terrorism’; and protesters against al-Sisi risk being arrested and jailed or shot. When similar things happened in Chile, the Western left and human-rights groups were outraged. But they, along with our human-rights-spouting political leaders, seem blasé about what’s currently happening in Egypt. Why?

Herein lies the rub: fundamentally, they support it. Or they’re at best ambivalent about it. Those Western ‘humanitarian’ warriors who spent the past 10 to 15 years weeping over Saddam’s military authoritarianism and the Taliban’s intolerance of opposition, and who demanded Something Be Done about those terrible things, are in favour of the military crackdown in Egypt. In the words of the New York Times’ David Brooks, who was so offended by undemocratic militarism in Iraq that he cheered America’s invasion in 2003, the current opposition-obliterating militarism in Egypt is fine because it has ‘removed from office’ radical Islam, ‘the main threat to global peace’.

Western leaders, from Barack Obama to David Cameron, have also given an implicit nod of approval to the coup, because they, too, prefer to see strongman control in Egypt over an Islamist-leaning government chosen by the thick Egyptian public (who lack the ‘basic mental ingredients’ for democracy, says David Brooks). Tony Blair, who spent a large chunk of his time as British PM posing as Mr Human Rights and wringing his hands over far-off military-style dictatorships, is now the go-to man for media outlets who want a big name to big up the Egyptian military dictatorship. ‘Democratic government doesn’t on its own mean effective government’, he said in his craven justification of the Egyptian military’s assumption of political power.

As to the human-rights industry – it seems cautiously supportive of the shift in political power in Egypt. Certainly its only, relatively mild criticisms have been of the excesses of the security forces, not of their takeover of the seat of government. That’s because it sees radical people it admires supporting the coup – from Tamarod to Mona Eltahawy, the poster girl of the 2011 anti-Mubarak protests, to the respectable National Salvation Front led by Mohamed ElBaradei, former nuclear weapons inspector beloved of international-justice types – and it assumes it must therefore be a good or at least okay thing.

What lies bleeding in Cairo, Alexandria and elsewhere in Egypt is not just the supporters of Morsi, but also the democratic pretensions of those Westerners who sing from the hymn sheet of human rights. Their high-minded posturing about authoritarianism in distant lands has been exposed as extraordinarily shallow, changeable, contingent, a sham. They’re enraged by political dictatorship in some instances, and completely relaxed about it in others. They rail against and even fire bombs at certain rights-abusing states, yet take to their iPads or appear on TV to defend and cheer or apologise for other rights-abusing states. The human-rights industry, the entire human-rights script read from by our leaders and betters over the past two decades, stands exposed, naked and ridiculous, following recent events in Egypt.