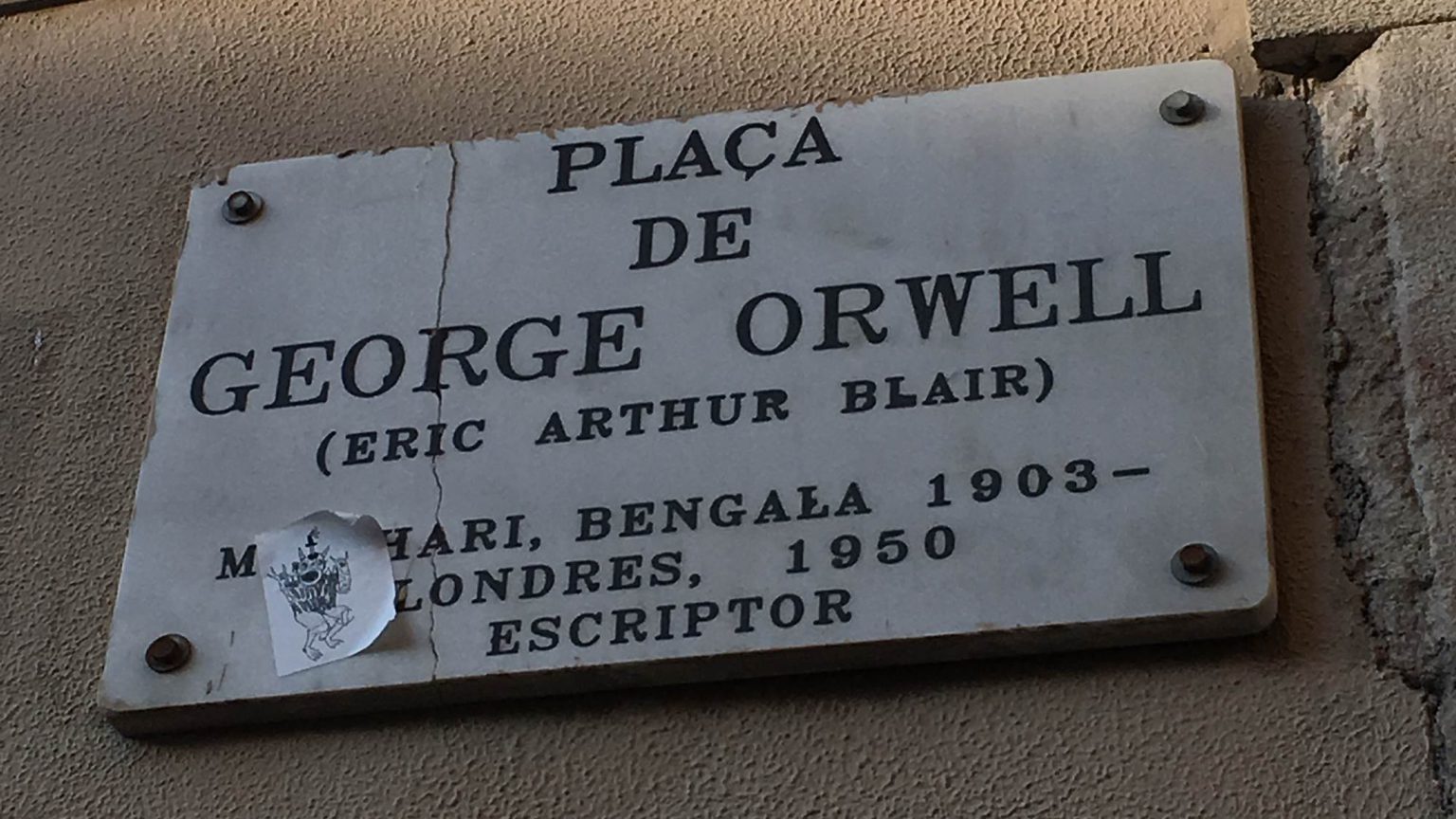 George Orwell could have been killed twice in the Spanish Civil War. Once when he was shot in the throat by General Franco’s fascist forces; then when he was hunted by official Communist agents who, with the backing of Stalin’s Soviet Union, stabbed the revolution in the back and imprisoned, tortured and killed leading leftists and anarchists who were ostensibly on the same Republican side. Orwell learned the hardest way that the war against fascism in Spain was also a civil war against Stalinism.

Homage to Catalonia, Orwell’s famous account of his time in Spain from his arrival in Barcelona on Boxing Day 1936 to his escape in June 1937, has just reached its seventy-fifth anniversary. Like its author, the book almost didn’t make it either. The radical journalist and author’s usual publisher, Victor Gollancz, turned the book down without even seeing the manuscript, insisting that he would not publish anything ‘which could harm the fight against fascism’ by criticising the Communists.

Most of those from Britain and Europe who went to write about and fight in the Spanish Civil War took a similarly one-eyed view and followed the pro-Soviet line. What was unique about Orwell was that he hated fascism, but also stood apart from the official Stalinist-dominated left of his time. The radical maverick wrote about what he saw in Spain, rather than simply what he was told was true – although he also warned his readers to ‘beware my partisanship’ when seeking an objective account. He questioned the ‘official’ Stalinist-dictated account of events in Barcelona and elsewhere that was accepted around the world. This heresy made him the subject of a hate campaign when Homage to Catalonia was finally published in 1938, a campaign which continued well into the 1980s.

Orwell concedes that when he arrived in Barcelona in December 1936, months after General Franco’s fascist rebellion down south and the working-class revolt it had sparked in the Catalan capital, he was politically naive about the situation in Spain. He wanted to join the International Brigades to fight fascism, but the Communist Party of Great Britain would not endorse his application. So, almost by accident via his links with the Independent Labour Party over here, Orwell ended up at the Lenin Barracks of the workers’ militia attached to the POUM – the anti-Stalinist Workers Party of Marxist Unification. Orwell confessed he was initially exasperated by the ‘kaleidoscope’ of different parties, trade unions and factions vying for influence on the left ‘with their tiresome names – PSUC, POUM, FAI, CNT, UGT, JCI, JSU, AIT… as if Spain were suffering from a plague of initials’. The significance of those divisions on the left would become clear soon enough.

Orwell gives an account of one corner of the Spanish Civil War from the perspective of an isolated and frustrated English volunteer. He depicts the militia he fought with as a poorly trained, barely armed ‘rabble’, capturing the frontline atmosphere of cold and boredom and squalor and shortages. The ‘characteristic smell of war’ he describes as one ‘of excrement and decaying food’, and notes with some sang-froid that, ‘If there is one thing I hate more than another it is a rat running over me in the darkness. However, I had the satisfaction of catching one of them a good punch that sent him flying.’ Orwell’s militia unit generally seemed to have less success landing a meaningful blow in their somewhat fitful exchanges with the fascist foe.

Yet amid the vermin and the organised chaos, Orwell was obviously deeply touched by the decency and heroism of the ordinary Spaniards and foreigners fighting for freedom by his side. Isolated on the frontline with the workers’ militia, he recalls: ‘One had been in a community where hope was more normal than apathy or cynicism, where the word “comrade” stood for comradeship and not, as in most countries, for humbug. One had breathed the air of equality.’

Like others, Orwell had gone to Spain in the spirit of anti-fascist idealism. The International Brigades were themselves partly a symptom of the defeat of the European left in the era of fascism and Stalinism. Those who could see no prospect of socialism at home grabbed at the chance to make a stand in Spain. When the Civil War broke out there in 1936, wrote Orwell, ‘every anti-fascist in Europe felt a thrill of hope’. Those hopes were to be dashed as they discovered that the Stalinist apparatchiks who had overseen the demise of the Russian Revolution were determined to make sure there was no boat-rocking proletarian revolution in Spain. And nowhere more so than in radical Barcelona.

When Orwell and his wife Eileen Blair (George’s real name was Eric Blair) first arrived in Barcelona, a city still largely under the influence of the anarchists who had led the revolt, he was inspired by the revolutionary spirit in the air (though also sensing that it was already past its peak): ‘Above all, there was a belief in the revolution and the future, a feeling of having suddenly emerged into an era of equality and freedom. Human beings were trying to behave as human beings and not as cogs in the capitalist machine.’ When he returned from the front months later, all had changed. The Stalinist-influenced Popular Front government was reasserting control, and the old divisions were re-emerging with ‘rich people wolfing expensive meals’ in restaurants while the masses went poor and short.

Despite his professed naivety, Orwell could now see through all the party initials and obfuscations to identify what was at the root of the growing political tensions within Barcelona. ‘The danger was quite simple and intelligible. It was the antagonism between those who wished the revolution to go forward and those who wished to check or prevent it – ultimately, between Anarchists and Communists.’ That antagonism came to a head when the authorities moved against POUM and the anarchists, ordering the disbandment of the workers’ militias, and fighting broke out in May 1937.

Dismayed by the turn of events, Orwell still saw it worth supporting the Republican government against Franco. He argued that the fascists had secured all the victories since 1930: ‘It was time they got a beating, it hardly mattered from whom.’ Yet at the same time he was coming to an important conclusion: that in holding back the people’s revolution, the Stalinists were also making it impossible to mobilise the forces necessary to win the war against fascism.

Nevertheless, Orwell returned to the front line, where he was shot and badly wounded in the throat. He thought this would please his wife, who had seemed keen on him getting wounded in order to avoid the worse fate of being killed. She was less pleased to see the patched-up George when he eventually got back to Barcelona, however. By now the POUM had been branded a ‘disguised fascist’ plot and suppressed. Its leaders were being imprisoned, tortured and killed, and foreign volunteers from Mussolini’s Italy and Hitler’s Germany were being deported back to face the tender mercies of their fascist regimes. In imminent danger, the Blairs went into hiding before escaping across the border to France in June 1937 by train – the first one he had seen in Spain, Orwell noted, where first-class carriages and a posh dining car had been reintroduced, a small sign of changing times. He returned to ‘the deep, deep sleep of England, from which I sometimes fear that we shall never wake till we are jerked out of it by bombs’. Barcelona eventually fell to the fascists in January 1939.

Orwell’s brilliant firsthand account of the conflict stands apart from and well above the I-was-there school of emotive, narcissistic war reporting we witness too often today. He also attempts to put his personal experiences into some proper political context, in two chapters now removed (at his request) from the narrative text and published at the end as appendices.

Here, Orwell closely interrogates and challenges the ‘official version’ of events in Barcelona, put about by the Communists and their many international apologists to justify their brutal repression of the non-Stalinist left. As he unravels the twisting of truth by propaganda organs such as the CPGB’s Daily Worker, you can almost see the ideas he was soon to express in his novels Animal Farm and Nineteen Eighty-Four. He is also cutting about the way that the Communists simply branded their opponents as ‘Social-fascists’ and ‘Trotsky-Fascists’ to avoid engaging in important political arguments. Many who express their admiration for Orwell today have yet to absorb his point that screaming ‘Fascists!’ in the faces of those you disagree with is not the same thing as making your case. ‘Libel’, as he concludes, ‘settles nothing’.

The likes of Orwell and the International Brigades who went to Spain have also often been cited in recent years by those demanding British and Western intervention in international crises, from the Balkans to the Middle East. But Orwell and his comrades-in-arms in the Spanish Civil War of the 1930s were no laptop bombardiers, demanding that their governments bomb the world to freedom. They went to fight for what they believed in. Orwell himself observed with suitable scepticism the presence of Royal Navy warships off the coast during the height of the Barcelona crisis: ‘It is at least inherently likely that the British government, which had not raised a finger to save the Spanish government from Franco, would intervene quickly enough to save it from its own working class.’

Orwell may not always have been right. However, he was willing not only to fight fascism on the battlefield, but also to speak out almost alone in Britain against the pro-Stalinist consensus on the European left. Seventy-five years on, Homage to Catalonia should still make us grateful that the military doctor who told the wounded Orwell that he had lost his voice forever was wrong.

Mick Hume is spiked’s editor-at-large. His book There is No Such Thing as a Free Press… And We Need One More Than Ever is published by Societas and is now available in print and Kindle editions. (Order this book from Amazon(UK).) Visit his website here.