The hypocrisy of the knee-takers

Marcus Rashford has been photographed alongside a notorious racist – where’s the outrage? 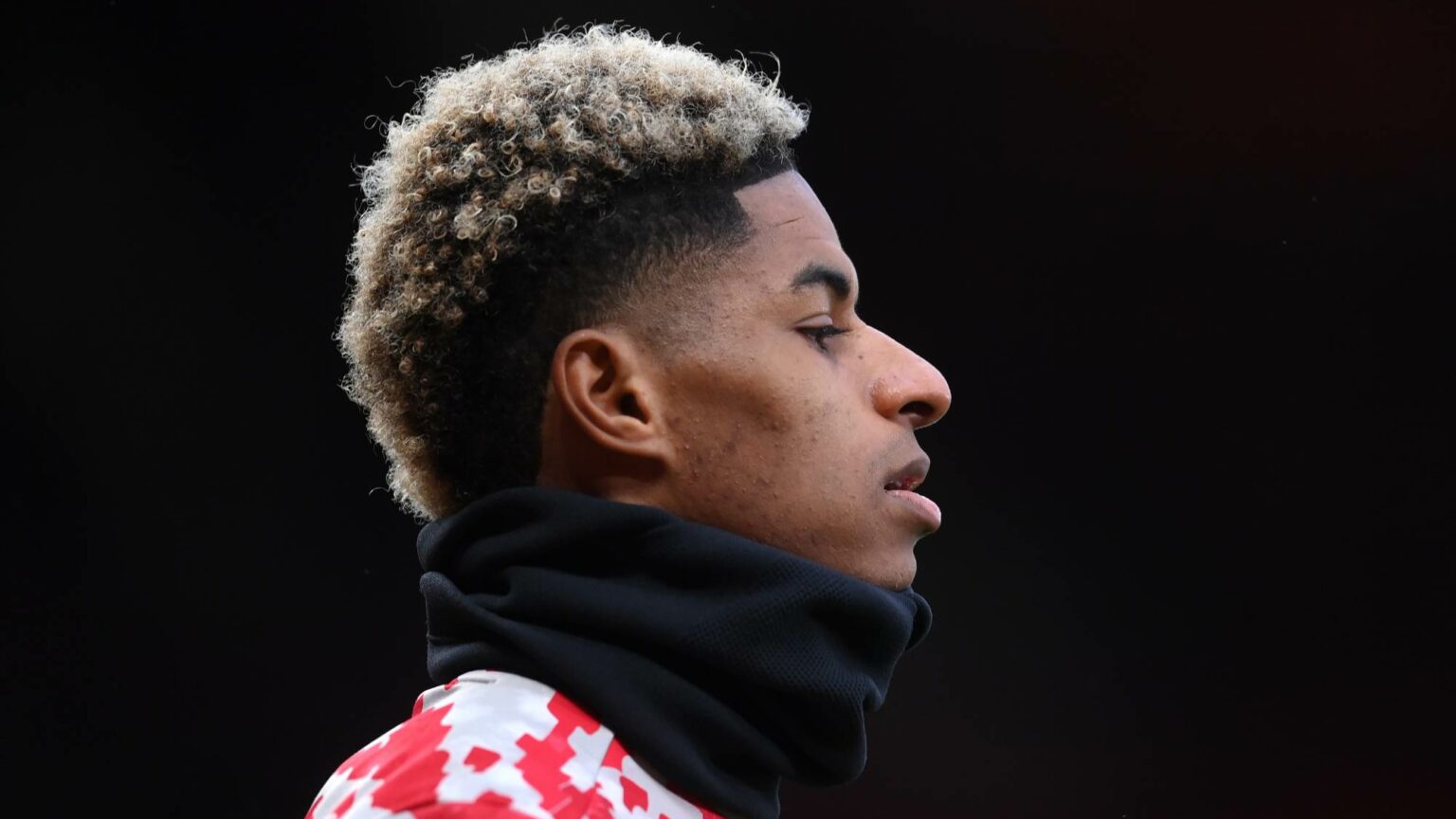 Picture this scenario. A white English cricketer is photographed alongside a man who once referred to black people as monkeys. This hypothetical cricketer is smiling in the presence of this notorious racist who also thinks slavery was an understandable practice – after all, how else should we treat blacks, those ‘snakes’ and ‘cowards’ who screw up everything for the rest of us? Now imagine what the response to such a photograph would be. It would be ferocious. The cricketer’s career would be over, kaput, utterly unsalvageable. It would be frontpage news for days. Cricket’s soul would be well and truly searched. There would be national self-reflection, social-media fury. It might even elbow aside Partygate on the news agenda.

So here’s a question – why has none of this happened following the publication of a photograph of football heroes Marcus Rashford and Jesse Lingard alongside grime artist Wiley? Wiley is a racist. He’s the David Irving of grime. His loathing for Jews has seen him banned from every social-media platform. Jews are ‘snakes’ and ‘cowards’, he says. They’re ‘Satanic’. He thinks Hitler may have had a point. ‘Why did Hitler hate [Jews]? For nothing?’, he asked in one of his deranged video tirades. And yet there are those two role models Rashford and Lingard with their arms around him in a photo reportedly taken in Dubai on Sunday, and not much has happened. Some headlines, sure, but that’s it. The woke set isn’t raging. Social media is not alight with anger. Football is not about to collapse. Rashford and Lingard will be fine.

How do we explain this stark double standard? Why is it a dead cert that if a top sportsman had associated with any other kind of racist – an anti-black racist or an anti-Muslim bigot – then his career would be history by now? We don’t even need the imaginary scenario outlined above to know how different such a situation would have been. Consider the cancellation of cricket legend Michael Vaughan after it was alleged that he said ‘There are too many of you lot’ in relation to Pakistanis some 13 years ago – an allegation he vigorously denies. So in Britain in the 2020s you can be dragged to the stocks for allegedly saying ‘you lot’ more than a decade ago, but you’ll be fine if you fling your arms around a man who thinks Hitler must have had a good reason to exterminate all those snakes.

There are two explanations for why the Wiley pic isn’t hitting as hard as a photo of a white cricket or tennis star grinning with a KKK nutter would have. For why the cancel-culture mob has stood down, for once, and said: ‘We’ll let this one pass.’ It’s either because the photo features Marcus Rashford who, with good cause, has become a national treasure. Rashford is a very admirable young man. His footballing flair, commitment to tackling poverty and moral integrity have endeared him to virtually the entire nation. Perhaps people are giving him the benefit of the doubt. Or it’s because the kind of racism spouted by Wiley – hatred for the Jewish people – just isn’t taken as seriously by the identitarian elites as other forms of racial bigotry are.

I think it’s a combination of these two things. I actually think it is right to give Rashford and Lingard the benefit of the doubt. Of course they should not be cancelled. We need far less of that career-crushing finger of judgement that our cancel-happy society is forever wagging at ‘wrongthinkers’. Rashford and Lingard have both now condemned anti-Semitism. However, it has to be noted how soft their statements are. That photo could ‘easily be misconstrued’, both said. Erm, yes – it could be ‘misconstrued’ as two young men who are worshipped by young people across the land posing for a photo with someone who thinks Jews are snakes. Rashford says he ‘wasn’t aware’ of Wiley’s anti-Semitic comments, which rather calls into question the extent to which Rashford is across the problem of racism in 21st-century Britain. A rounded anti-racist would surely be aware that one of Britain’s best-known grime artists had recently referred to Jews as reptiles?

No matter – Rashford and Lingard have made clear their distaste for anti-Jewish racism and that should be an end to it. And yet that question still lingers, like a bad smell in the world of woke politics – why are Jews always treated differently? Famous sportsmen are photographed next to an anti-Semite and woke’s normally noisy warriors against racism say nothing. A man from Blackburn treks 4,000 miles to terrorise Jews in Texas and tumbleweed rolls across the computer screens of Britain’s anti-racist set. Jews are murdered by Islamist extremists in Europe and there’s silence from the kind of people who will write a 50-tweet thread on why you shouldn’t ask a black woman about her hair. As for the problem of black anti-Semitism, which is a fairly serious problem in the US, or Muslim anti-Semitism, which is a pox in parts of the UK, don’t even go there. You’ll be branded racist and Islamophobic for broaching such problems. In the eyes of the woke mob, it is basically ‘Islamophobic’ to talk about anti-Semitism.

There is a fairly straightforward explanation for all of this: it’s because identity politics is not anti-racism. Today’s elites are not concerned with tackling and defeating racial thinking but rather with rehabilitating it in a new form. The woke set suffers from racial myopia. It views everything through the prism of race. Worst of all, identitarians have built new racial hierarchies of the ‘privileged’ and the ‘oppressed’ which determine the moral worth of racial groups. Whites are privileged, and thus bad. Muslims are oppressed and thus deserving of social sympathy. Black people, too. And Jews? They’re the worst. They are hyper-white, hyper-privileged. Their role in the identitarian psychodrama is to atone for their advantages, not to complain about the historical persecution they suffered or the racism they still experience today. Pipe down, Jew.

This is the rotten truth of identity politics – it ‘Others’ certain racial groups every bit as enthusiastically as the racists of old did. It others Jews in particular. Its dogmas of ‘privilege’ and ‘oppression’ have given rise to a whole new era of good races and bad races, to the sanctification of some identity groups and the demonisation of others. Because genuine anti-racists are concerned with tackling all forms of racial hatred and discrimination, we are as horrified by anti-Semitism as we are by anti-black racism or bigotry against Asians. Because identitarians are concerned with organising humanity into ‘good’ racial groups and ‘bad’ racial groups, as a way of maintaining their own elite power as managers of race relations and enforcers of correct thought, they signal-boost acts of racism that bolster their ideological cause while diminishing acts of racism that call their belief system into question. Identity politics, being a new species of racism, is expressly complicit in the diminution of the problem of anti-Semitism.

Footballers like Rashford and Lingard take the knee against racism and then hang out with a man who views Jews as snakes. We need to reflect on this. It suggests, as powerfully as anything else I can remember, that the identitarianism that now infects every aspect of public life, from football to politics to culture, is not confronting racism in the way we need to.