This has become a neo-Maoist war on the past

The woke elites have launched a Cultural Revolution. They must be stopped. 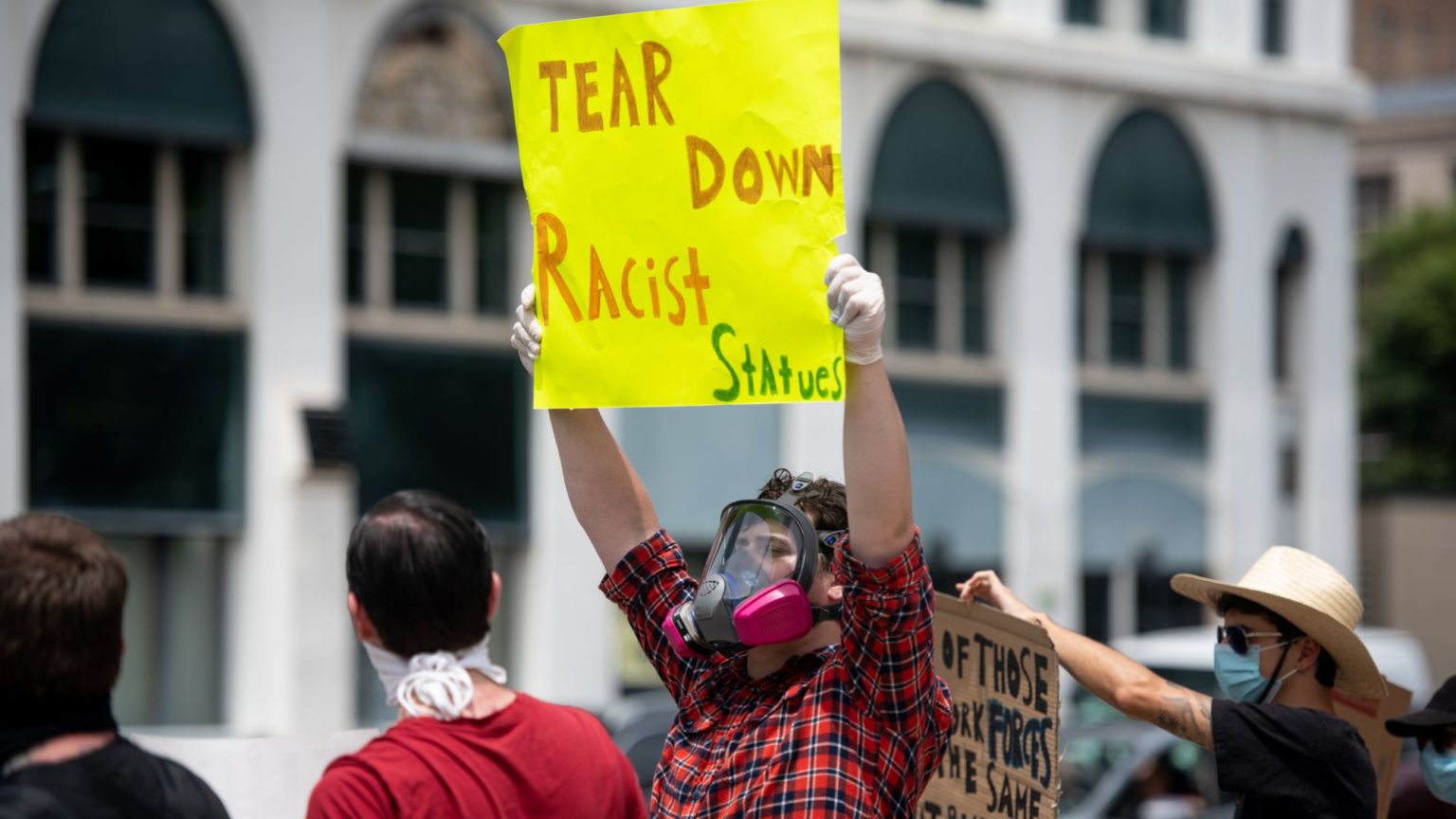 Britain is in the throes of a Cultural Revolution. Statues are being tumbled, past art erased, people cancelled. Wide-eyed Woke Guards, heirs to Maoist-style intolerance, are compiling lists of monuments to target and individuals to humiliate. They are remorseless. Nothing old that runs counter to their newthink can be tolerated. Tear it all down.

The speed with which protests over the murder of George Floyd morphed into a war on the past has been staggering. The mob’s toppling of the statue of slave trader Edward Colston in Bristol was the noisiest, most visible victory so far for the new Cultural Revolution. They’ve moved on swiftly. The appetite for erasure seems insatiable.

Last night, a crowd in Oxford demanded the destruction of the likeness of Cecil Rhodes at Oriel College. In an effort to keep the woke wolf from the door, the Museum of London Docklands took down a statue of slave trader Robert Milligan yesterday. The Woke Guards are circulating a list of the next evil bronze and stone entities that must be swept aside. It includes statues of globally significant historical figures. Sir Francis Drake, Christopher Columbus. Purge them, erase them. Britain’s neo-Maoist cousins in the US have already made short shrift of Columbus: yesterday in Richmond, Virginia a mob tore down his statue, set it on fire, and threw it in a lake. Their fervour and madness are easily a match for the most committed Red Guards who swept China for ‘unacceptable’ artifacts in the late 1960s.

When a statue can’t be toppled, it is abused. Churchill’s monument in Westminster was spray-painted with the word ‘racist’. Even Abraham Lincoln, who fought a war to end slavery, did not escape the mob’s grafitti. Well, he’s a white man, thus evil. In Leeds, the statue of Queen Victoria was defaced, including with the spraying of pink paint on her breasts and crotch, bringing to mind the extra element of sexual humiliation – hair-cutting, the confiscation of clothes – that China’s Red Guards would visit upon women who dared to possess incorrect thoughts.

The fervour for erasure is not limited to statues. Incorrect art and entertainment is expunged, too. Yesterday the BBC and Netflix cast into the memory hole old episodes of Little Britain because they feature white actors occasionally dressing up as black people. Leigh Francis (aka Keith Lemon) tried to placate the Woke Guards by issuing an emotional apology for his past mimicking of famous black people. Aussie comic Chris Lilley, who has also played non-white characters, will be next. His ‘massively outdated comedies’ must be razed too, says one compliant cheerleader of the new Cultural Revolution. They won’t stop there. History is full of film, literature and entertainment with questionable depictions. Light the matches. Indeed, Gone with the Wind has already been taken down by HBO Max because of its depiction of black people. What will be next?

In the US, the list of the cancelled grows longer every day. It includes senior editors at the New York Times and the Philadelphia Inquirer, found guilty in the new Cultural Revolution’s kangaroo court of publishing incorrect thoughts. The British wing of this deranged crusade against wrongthink has blood in its nostrils now. It will likewise seek to cleanse the media of thoughtcriminals. Already it is going after Melanie Phillips and Nick Ferrari, fine journalists whose only offence is to have made utterances that displeased the cancel-hungry mob of neo-Maoists.

The similarities with the Cultural Revolution are striking. In that feverish war on the past, statues were torn down and cast on to fires, as happened in Virginia yesterday. Buddhist statues were a favourite target because they embodied the ‘old customs’ the Red Guards longed to erase. It was a ‘frenzy of smashing’, as one account puts it. Any statue that depicted ‘political swindlers’ was torn down. The Red Guards were as offended by monuments to Confucianism as the Woke Guards are by monuments to long-dead slave traders. Like today’s giddy statue-smashers, they, too, thought they were being progressive by sweeping aside memorials to oppressive ideas or people.

Wrong ideas were the main target in the first Cultural Revolution. Books were burned, overly ‘Westernised’ teachers were humiliated, mass re-education took place. It was a frenzied war against the ‘Four Olds’ – old ideas, old culture, old customs and old habits. Today’s intolerant crusade pursues the same quarry. Although it also rages against the Not-So-Old – even TV shows from a few years ago can be erased by the new moral cleansers of public life.

And as in the original Cultural Revolution, in Britain there is already fear among the political elites who for the past week have flattered and fawned over the neo-Maoist crusaders that perhaps they are starting to go too far. Liverpool University, in response to a group of students, has agreed to erase the name of William Gladstone, the 19th-century Liberal prime minister, from its halls of residence on the basis that his father was involved in slavery. The sins of the father… Gladstone, of course, was one of Britain’s most important historical leaders. He left a lasting legacy, including via the Third Reform Act (1884) that expanded the vote to more men. By promoting the idea of Home Rule for Ireland, he helped to set in motion the journey towards Irish independence.

That even a figure like Gladstone is being cancelled has got some people worried. Mao had a similar experience. Alarmed by the fervour of the Red Guards, he sent police to protect the most important historical and cultural monuments from attack. But what do these people expect? Whether you’re Mao or a tragic Labour MP who tries to appear relevant by cheering on middle-class youths tearing down statues, you should know that it is easy to unleash febrile intolerance but hard to rein it in.

This is why London mayor Sadiq Khan is making such a colossal error by cynically trying to institutionalise the intolerant war on the past and on offensive artifacts. He has set up a commission to review London’s statues, street names, building names and plaques, with an eye for erasing those linked to slavery or racism. This Stalinist commission aspires to nothing less than the overhaul of London’s streets and monuments to the satisfaction of noisy woke crusaders. And already some are asking if Khan will topple the newly erected statue of Millicent Fawcett in Parliament Square on the basis that she held some questionable views. Everyone in history did. In institutionalising the middle-class mob’s appetite for destroying all things ‘problematic’, Khan is cultivating a climate of historical and political intolerance that could have far-reaching destructive consequences.

How did this happen so fast? How did protests over the police killing of a black man in Minneapolis become a PC war on statues, street names, art and people judged to be suffering from wrongthink? Partly, it speaks to the colonisation of public life by the narrow, eccentric concerns of the over-educated middle classes and ostensibly progressive bourgeoisie. That millions of people, white and black, are losing their jobs as a result of the lockdown and yet left-wing debate is dominated by the question of which 200-year-old statue to tear down next is testament to the left’s replacement of class and economic questions by virtue-signalling and an obsession with woke propriety.

More fundamentally, this is all a continuation of what had already been happening. We live in an era of intolerance and unreason. From higher education to the political sphere, from the new media to activist circles, PC censoriousness is rampant. New orthodoxies emerge with extraordinary speed and are enforced with rigour. Say the wrong thing on gender or race and you’re out. Question the gospel of genderfluidity, wonder out loud if ‘white privilege’ is really a thing, deny the truth of the End of Days foretold by climate change – you do all these things at your peril. What we are witnessing right now is something that is actually disgustingly cynical: the exploitation of the anger over George Floyd’s death to bolster the zealous crusade to institutionalise PC orthodoxies that would have been as alien to Floyd as they are to most normal people.

Let’s call it what it is. It’s re-education. The Woke Guards might use more flowery language than the Red Guards, talking about ‘a radical reorientation of our consciousness’ (in the words of much-celebrated author Ibram Kendi). But it amounts to the same enforcement of orthodoxy that we have seen in history. It’s time to stand up to this Cultural Revolution. This isn’t about defending slave traders, which is the latest slur that the enforcers of woke orthodoxy throw at their critics. It’s about defending reason, freedom, the right to dissent, and the pluralism and complexity of the public square.